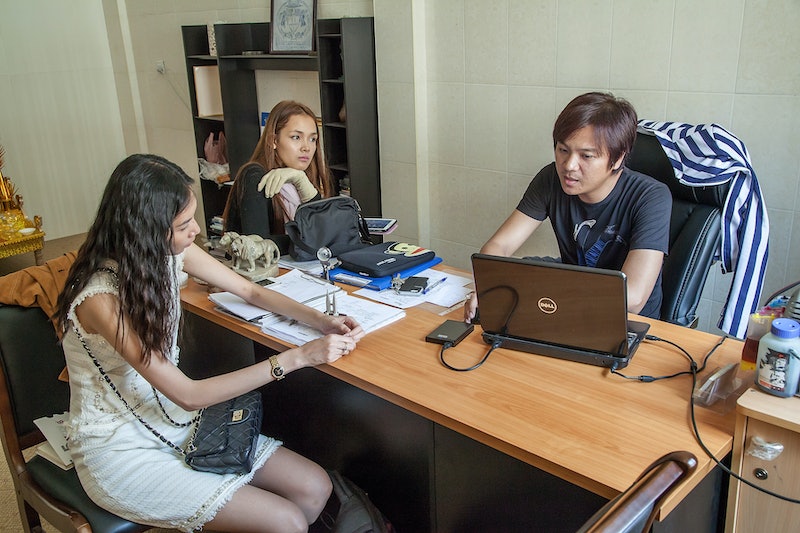 Trying to get a new job is no easy feat. And because scouring the Internet for that one perfect position isn’t hard enough, there’s also the whole interview process to worry about. Not only do you have to contend with the possibility of feeling forced to answer a question that's illegal (we’ll get to that in second), but we women also have to deal with potential discrimination, simply because we're women.

Studies show that when given the choice between hiring a woman of “childbearing age” or a man of the same age, a third of managers are going to choose men. Because why hire a woman who might want to have a child in a couple years when you can hire a dude who, if he and his partner have kids, will only be taking a mere week for paternity leave?

A recent survey of 500 managers by law firm Slater & Gordon found other alarming facts, too. Forty-four percent felt that hiring women was a “significant concern” due to the financial toll that maternity leave can have on a company (because all women want to have kids, of course). Even worse? “A third of managers claim that women are not as good at their jobs when they come back from maternity leave.”

Not hiring someone on the off chance that they may or may not have a child someday absurd. It is also very illegal.

Although some interview questions are obviously illegal, like being questioned about your ethnicity or sexual orientation, others can seem totally legit — especially if you have a nice banter going with your interviewer. But it's crucial to know that you are not under any obligation to answer certain questions.

So the next time you go into an interview, be on the look-out for these questions. You’ll know the question is illegal if you’re asked …

You can't even be asked if your last name is your maiden name or not. They can ask if you've worked or earned a degree under another name, but whether you're single, engaged, married, or in a polyamorous relationship with 15 people, it's none of their business.

are you pregnant or do you have kids?

In their dreams is right. It doesn't matter if you have the thickest accent in the world, you can't be asked what your first language is, nor can you be asked what country you're from, or how long you've lived in the States. They can ask you "What languages do you read, speak or write fluently?," so if you offer up where you're from on your own, then that's on you.

do you get sick a lot?

Even if your past or current illnesses directly affect your job, your medical history is not up for discussion. However, you can be asked if you're "able to perform the essential functions of this job with or without reasonable accommodations?" (That's how they get around straight-up asking if you're at death's door and won't be around for your three-month review.)

have you ever done drugs or had a drinking problem?

OK, this one is a little tricky. Companies can't ask about your past drug use, but they can ask if you currently use drugs, and what those drugs are. The reason for this is that the Americans With Disabilities Act only protects past drug use. In addition to the drug thing, potential employers also can't ask if you drink, even socially, because that also violates Americans With Disabilities Act of 1990. How? Because if you're a recovering alcoholic, that's part of your medical history.

Which religious holidays do you celebrate?

You might think they're inviting you to the Christmas party early, but this question actually reveals your religion, and it's illegal to ask about that in a job interview.

I wish I knew this one before a past job looked into my credit score and saw a big, fat zero, but I digress. If an employer wants to know how in debt you are or just how perfect your credit score is, they'll have to ask permission first. Not only are they not allowed to ask about your spending habits, but they can't ask if you own property, how many bank accounts you have, or whether or not you're proficient in balancing your personal finances.

have you ever BEEN ARRESTED?

why were you discharged from the MILITARY?

The feeling here is if a soldier is dishonorably discharged, it shouldn't stand in the way of getting a job. However, interviewers can ask about education, training, and even where you were stationed.

how tall are you?

No matter how tiny you look, no one gets to ask you specifics about your height or weight. If something's out of reach and your height is a concern, you can just remind them that step stools exist for a reason.

HOW LONG have you been working?

They might be able to tell based on when you graduated, but age is also not a topic they can ask you about. When people ask how long you've been working, with some quick math, they can easily figure out, roughly, your age.

do you live near the office?

Yes, your address is on your resume, but that still doesn't give anyone interviewing you the OK to ask the details about where you live. If they're really interested, they can Google it later.

As I'm sure you've noticed, applications for jobs often ask for an emergency contact, which is very much within their right to have after your employment. What isn't in their right, whether before or after employment, is asking how that emergency contact is related to you. If it happens to be your husband, then voila! Now they know you're married . . . so they'll probably assume you're going to have a baby.

WHICH ORGANIZATIONS do YOU BELONG to?

What you do in your free time is your business. That includes that single's knitting club. You do you.

Editor's note: If you've been asked one of these questions in an interview, you can file a complaint with the U.S. Equal Employment Opportunity Commission.

More like this
Black Women's Equal Pay Day Highlights An Upsetting Problem
By Brandi Neal
Women Around The World Are Cutting Their Hair In Solidarity With Mahsa Amini
By Darshita Goyal
10 Ways To Be More Empathetic To Your Partner
By Raven Ishak and Lexi Inks
Think Your Partner Is Cheating? These Tarot Cards May Confirm Your Suspicions
By Kristine Fellizar
Get Even More From Bustle — Sign Up For The Newsletter