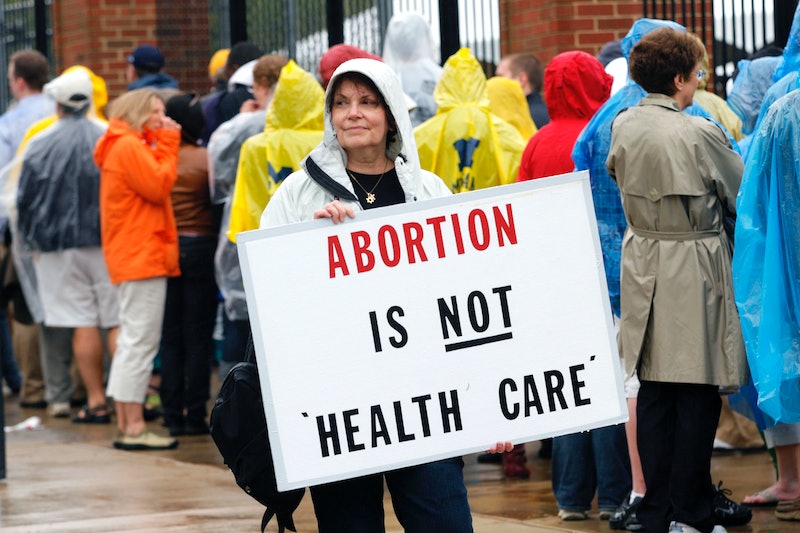 The abortion debate in America has been going on for decades and will probably continue well into the future, but rather than growing calmer and more productive, things only seem to be getting scarier. Not only has 2014 seen more bills aimed at regulating women's bodies introduced already this year than there we saw even last year, but now it seems that anti-abortion activists are actually tracking the license plates of people who go to abortion clinics. If that isn't enough to terrify you, I don't know what will.

As you can hear in a series of audio clips taken from an anti-abortion training session held on August 4 and released to the public by NARAL Pro-Choice Texas and Progress Texas on Tuesday, tracking license plates is becoming a popular tactic, one that organizers are openly encouraging anti-choice activists to utilize. And listening to speakers boast about the times they successfully intimidated patients away from clinics or bullied employees into quitting is absolutely chilling.

The sad but scary truth is that the self-proclaimed "pro-life" movement has a long history of deadly violence. And although anti-abortion activists would like people to believe that this is true of both sides, a Google search for "pro-choice violence" turns up mainly outraged posts about people shoving or getting into fights with protesters outside clinics, which is sort of expected given the in-your-face tactics protesters often employ. Searching "pro-life violence" on the other hand, reveals that the topic is serious enough to have its own Wikipedia page.

In other words, these are not the sorts of people you want tracking your license plate. Not even a little bit.

Here's the thing: I'm well aware that abortion is a difficult issue, one that people have all sorts of views about, and I have known plenty of pro-life people who are good people and would (I hope) never boast about harassing clinic employees into quitting their jobs. But I'm going to come out and say right here and right now that the people who use these kinds of tactics, and endorse them for others, are behaving awfully.

Harassing women who want to exercise their constitutional and moral right to control their own reproductive destinies is awful. Tracking clinic employees and trying to get them to quit their jobs is awful. Lying to women about abortion risks or telling them a clinic has closed when it hasn't is awful. Trying to use fear or intimidation or lies in order to take away people's choices is awful.

And yet as you can hear in this recording, some anti-abortion activists not only behave this way but openly and proudly boast about it. Only to be met with applause.

Hopefully someday, pro-life and pro-choice people will be able to agree to disagree. Someday maybe anti-abortion protesters will focus on things like providing free contraception to teens and low-income women, or setting up clinics to provide women with free prenatal care, or raising money to support young mothers — you know, things that might make women feel like abortion isn't their only feasible option or even never need to consider one in the first place. Maybe someday we'll even live in a world where "pro-life" states aren't also pro-death penalty.

But for now, we've got this: