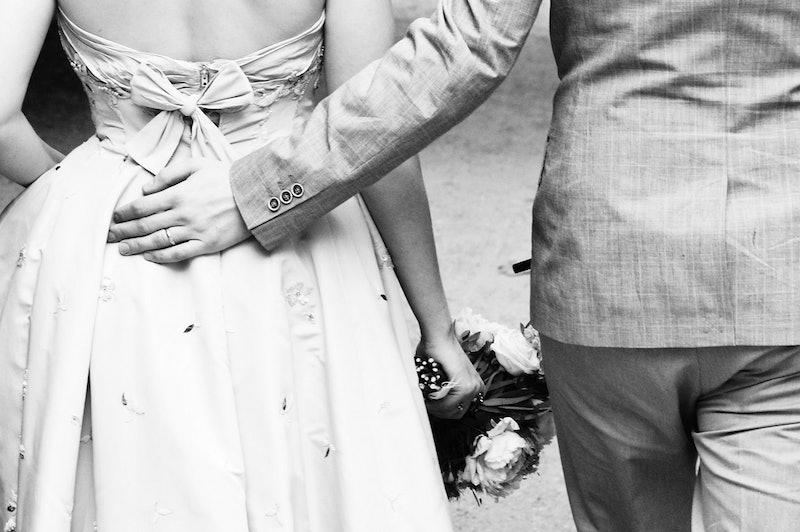 I've hit the paper anniversary, the cotton one, the big Year One of Being A Spouse. And apparently, I'm supposed to have learned something from this experience — other than the fact that personalized thank-you notes are a pain in the behind and that the lack of a potato-sized diamond on my engagement ring will always confuse people. (I can't wear big rings. I hit myself in the face with them. Elizabeth Taylor would despair of me.)

The first year of marriage is proverbially regarded as one of the toughest you'll endure in your married life — The Huffington Post diplomatically called it "a learning experience" in a survey of one-year-married spouses — and it's commonly thought to be the year where the sheen comes off. "Strike an average between what a woman thinks of her husband a month before she marries him and what she thinks of him a year afterward," said H.L. Mencken in 1916, "and you will have the truth about him."

Knowing this, I started to hunt for data. "Performance evaluation of this first year, on a scale of one to 10?" I asked my spouse on our anniversary. "15 million," he replied cheerfully. Despite his blatant disregard for analysis parameters, that was pretty accurate. Still, there are more than a few lessons I've learned in this first year. Here are the most important:

people will suddenly think you're an adult

We share a bank account and have vomited on each other at least once — that's the stuff of long-term solidity, people. But it can't be denied that doing the Marital Two-Step out of the courthouse and picking petals out of your bodice suddenly gives your private twosome a shiny veneer of official approval.

Before marriage, mortgage brokers, investment planners, and other such purveyors of Adult Things looked at us in vague confusion before backing away. Now, they're queuing up at the door. Because we are Married People, it seems, we must also want two bedrooms, a mortgage repayment plan, gilt-edged securities, and a non-refundable sofa and lounge set.

This is pretty confusing, as the closest I want to come to a mortgage is decorating a dilapidated doll's house I picked up at a jumble sale. But that's what you learn: Being married is apparently synonymous with being grown up, even if you have no intention of doing anything of the kind.

Your friends will be afraid of you

After all the confetti and congratulating and giving of confusing ceramic cookware, your mates will start hesitatingly asking what they most feared: "Are you going to become one of them?"

Them is code for "smug married people who look at single, unmarried, or otherwise non-maritally-inclined humans as congenitally defective." We all know them. They are horrible and fun-sucking, especially at dinner parties. "You'll meet somebody someday," they coo, stroking their beloved spouse's arm with one hand and regarding you with benevolent pity.

Symptoms of becoming THEM include: speaking of yourself and your partner as one entity; the urge to set friends up "so they won't be alone"; the gradual culling of single people from your circle of mates because they make you nervous; and the purchase of anything explicitly labelled His And Hers. I am morbidly afraid of them, which (hopefully) makes it less likely I'll turn into one.

I'm academic by nature, so after we got married, I read a lot of research on what makes a good, lasting, happy marriage. (Data: I believe in it.) Luckily, they all advised patterns that my husband and I already consciously adopt: avoiding passive-aggression like the plague, maintaining independent interests, not storing up ammunition for arguments, talking everything out, being physically affectionate and silly, making complaints instead of personal attacks, and so on.

But the research, though it raised many different ideas, was unified on one conclusion: The most crucial thing is to always, always be kind.

Any long-term relationship teaches you that. But if you're legally stuck with one another until death do you part, it becomes seriously crucial. Kindness encompasses a swath of behaviors: forgiveness, grace, support, effort, acceptance, generosity, and respect. You can have an argument and still be kind, be frustrated and still be kind, be disappointed and — you get the idea.

Kindness is far more important than big romantic gestures. I'd rather a bear hug when I've had a hard day than a giant bunch of flowers any time.

Dear Mrs. [THAT'S MY HUSBAND'S NAME YOU FOOLS] . . . Patriarchy needs to get the hell out of my mailbox. It would be fine if my husband really did pay all the bills, do all the thinking, and make all the financial decisions, but it's 2014 and that's about as likely as a hen laying square eggs, so can we put a sock in it, please?

Personally, marriage hasn't changed our dynamic — we got married because we thought it'd be excellent to have a physical statement of our relationship in the public sphere, and to be recognized as Serious Business by visa officials and state governments. (We're an international couple. That shit's important.) But people always want to know: "What's being married really like ?"

For the first few weeks of mawwage I was spooked, looking over my shoulder expecting something to happen, or for some significant feeling to emerge. Nothing, obviously, happened. I'm not good with enforced romance or expectations in general. My husband still tries to eat my nose and carry me around the kitchen, and I still regularly steal his cardigans. Things are, frankly, just as they ever were, but with "forever" stuck jauntily on top, reassuring us.

One year on, people are still celebrating, still wishing us happy anniversary, and even giving us one-year gifts. (My great-aunt told me she'd contemplated sending me an Orthodox Jewish blessing for the first year of marriage — "but that's meant for people who lose their virginity on their wedding night, dear, so I didn't think it was quite right.") Weddings manifest love, but marriage retains it, holds its glow, and forms a sweet feedback loop.

That, to me, is why marriage equality remains so critically important — being married myself has only enhanced that. To declare your love for each other in a public forum, for everybody to see, and be celebrated and supported (even if you elope and the only witnesses are a drunk passerby and a lost pigeon), is a fundamentally human happiness. Everybody deserves to have it if they want it. It's such a simple thing — but it can matter so very much.