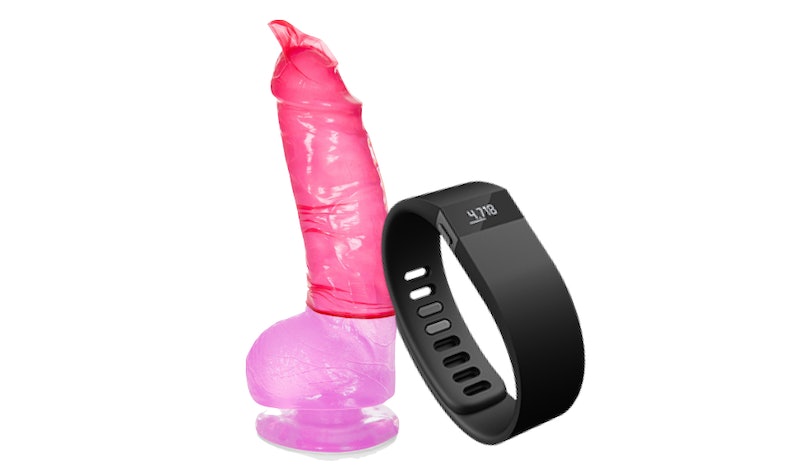 Aside from idly wondering how many calories sex burns or whether chewing food counts as a workout, I've never been that interested in exercise. I always considered reading an issue of Shape in the waiting room at the gynecologist’s office to be an acceptable form of aerobic activity, and I didn’t give much thought to wearable activity trackers like FitBit and Jawbone when they debuted a few years back. But this past year, after a prolonged bout of insomnia left me at my wit’s end, I bought a FitBit to monitor my sleep. I figured I would use it for a few weeks, bring print outs of my sleep cycles to my specialist, and then put it back in the box and try to return it to Target.

And so, of course, as my FitBit obsession began to exert an increasingly strong pull over me, I began to return to my earlier wonderings about sex — if household chores burned calories, surely doing it would too. There’s a lot of talk out there about whether, when, and how sex counts as an aerobic exercise, but the numbers vary so wildly (I read articles claiming everything from 30 to 100 as the number of calories burnt during a single sex session), and the info is always so general — every piece just noted how many calories are burnt “having sex.”

And as a newly-minted health scientist (in reality I have zero medical training and if you are looking for actual health advice you should go to an actual medical professional), I knew that science is all about details! That’s, like, the basis of the scientific method or something. And these articles had left out all of the important details! What kind of sex burned the most calories? What kind burned the least? Was there a way to game the system so that you could just give a really long and involved handjob instead of going to a cycling class? When does sex actually count as cardio?

These questions were relevant not just for my own obscene curiosity, but for the legions of productivity mavens out there who fill up our mighty Internet with guides to lifehacking your pizza and turning your smartphone into a hair dryer and whatnot. Wouldn't they want to know the best way to feel the burn while also feeling, you know, other stuff? I owed it not only to myself, but to them, to find the answers.

The Goal: To determine which sexual acts or positions burn the most calories.

The Method: To accomplish this, I will use a FitBit to count the number of calories burned while performing various sexual activities in five-minute increments.

The Subject: I am a 32-year-old female, 5’2”, in medium-decent shape. I jog occasionally and am in generally good health (except for the insomnia thing). I am heterosexual, and was the penetrated partner in all of the experiments below (though if any of you want to check the cardio stats on some Bend Over Boyfriend action, I would be thrilled to peer-review your results).

In order to establish a baseline of how many calories my body consumed at rest, I monitored myself while doing a few non-sexual warm-up activities first:

WATCHING A SEVEN-YEAR-OLD EPISODE OF THE TV SHOW SUPERNATURAL

WRITHING AROUND WILDLY ON MY FLOOR, A LA MADONNA’S 1984 PERFORMANCE OF “LIKE A VIRGIN” AT THE MTV VIDEO AWARDS

With these parameters set, like the great Marie Curie, I began experimenting on myself.

Now that I had reached the limits of what I could discover on my own while in my room, pretending to be “working on my novel,” it was time to get a second test subject involved. So I asked my boyfriend if he would have extremely awkward sex with me that involved pulling out every five minutes and letting me look at an iPhone stopwatch while we did it. And, bless his heart, he said yes.

The Second Subject: My boyfriend is 28, also in generally good health, and is clearly a total fucking mensch for going along with all my crazy-ass plans. Living with me must be like living through a semi-nude episode of I Love Lucy every day. I’m sorry, honey.

And yes, we role-played the entire thing as Lizzy Caplan and Michael Sheen on Masters of Sex; quite frankly, I’m offended that you even felt like you had to ask.

And now, on to the hard numbers, as it were:

Notes: Nothing too shocking here; giving a hand job feels like hard work, and apparently, it is. If you were able to give a hand job for a full hour, you’d burn nearly 200 calories...but something tells me that you’d probably never go on a second date.

Notes: This one was shocking, because performing oral sex can feel extremely effort intensive. But maybe it’s more effort intensive in a “trying to hold a yoga pose” kind of way. Also of note: both bouts of oral sex were performed with the receiver lying down; you can probably burn more calories standing up, but, frankly, I didn’t feel like it.

Notes: And I wasn’t even being that vigorous! The only real limit to the number of calories you can burn while on top is your imagination/ stamina/ confidence that you will not accidentally bounce up too hard then land kind of weird on the guy’s penis and he’s like “ahhhhh!” and then the whole thing is over.

Notes: Despite deploying everything from the kitchen counter to a weird Ikea coffee table that one of my old roommates left, I just couldn’t make this one work for five minutes straight. Sorry. I’m a blogger, not a miracle worker, damn it!

While, as predicted, girl on top is the winner in terms of sheer cardio power, doggy style is a great way to become closer as a couple AND burn off the calories from that second slice of Domino’s Artisan at the same time.

Overall, a varied and semi-lengthy sexual encounter is a fun way to get your pulse rates up a bit, or maybe compensate for that half hour you spent looking for a parking spot instead of just parking like two blocks away from the movie theater. But, sadly, it is no real substitute for a trip to the gym (it is also no real substitute for a sexual encounter where you are just having fun and not thinking about something boring like burning calories).

My boyfriend was a good sport about the whole thing, but later that night, told me it’s basically either him or the FitBit. I’ll let you know which one I choose next week.