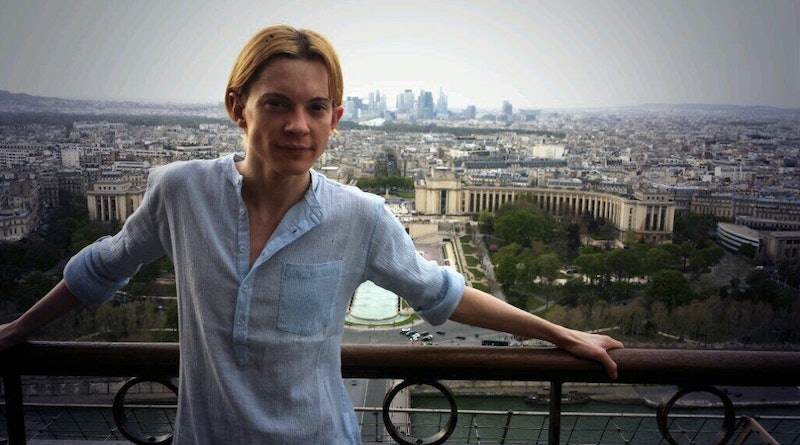 As Andrea Garcia-Vargas wrote in Bustle in January, sex work is not the same as trafficking... nor should sex workers be anyone's "rescue project," a message sent loud and clear by the hashtag #NotYourRescueProject, which trended on Twitter earlier this year. Yet stigma against sex workers continues to persist, and this stigma hurts everyone.

Josh Brandon, UK's highest paid sex worker (making up to £4,000 a night and £30,000), is trying to change that. Being a sex worker, he insists, isn't so strange. It is not disgusting. It is not illegitimate. It is work.

“The only other job you can be in and learn so much about people is being a psychologist,” he told The Independent. “It is definitely a career for me. If people were in this business they would understand that you have to be your own manager and publicist, as well as provide a service to your clients.”

When asked if there could ever be a shift in the way society views sex work, he's skeptical, yet hopeful. "But the more we challenge it, the more people will realise that we are normal people," he said.

Brandon, in his effort to normalize sex work and re-brand it as a legitimate career, has emphasized that most of the people who pursue this work have full agency. His job, like any other job, is a business enterprise, and he refuses to be ashamed. Not only is his entrepreneurial approach promising as a stigma-bashing mechanism, but it's drawing much needed attention to the real, lived experiences of sex workers, experiences so often ignored or ridiculed. In December, Brandon will publish his first book, The Gay Escort’s Guide to Getting Rich ... And Staying Rich .

"I have a very professional booking system and I offer complete discretion," he said, in an interview with BBC. "My business model serves my clients and it serves me...I've met clients visiting London and now they fly me out to their home countries for my services...The most I've ever made is £30,000 in a month. When I work that hard, the money can be great."

Efforts to legitimize sex work and end its stigmatization have been largely unsuccessful, because stigma is a powerful monster, rooted in moral, legal, and political systems that perpetuate shameful (and incredibly dangerous) ideas about sex workers' lives and their value.

Laws need to change. The decriminalization of sex work would likely reduce rates of HIV, according to a 2014 study conducted by The Lancet. The study found that making sex work criminal led sex workers to conduct business in unsafe, isolated areas, discouraging them from seeking help from violence or disease when they needed it, for fear of arrest.

Laura August, in an incredibly powerful essay for Jacobin , poses (and answers) a fundamental question: "What does a woman who sells sex accomplish that leads to her being treated as fallen, beyond the pale, incapable of speaking for herself, discountable if she does speak, invisible as a member of society? The answer is she carries a stigma." To tackle the laws, then, we need to tackle stigma. If we lived in a more humane society, public health and civil rights concerns would be impetus enough to reevaluate our harmful attitudes towards sex work, but that doesn't appear to be the case, which makes Brandon's voice all the more powerful.

As August notes, the key to dismantling stigma could be the movement to frame sex work as a legitimate business. "For advocates of the decriminalization of all commercial-sex activities, the disappearance of whore stigma would occur through recognizing and normalizing the selling of sex as labor," she writes.

Brandon is a big deal because his public insistence on sex work's legitimacy — on his legitimacy as a person — is getting the world's attention. And while the visibility granted to him is gendered (women are more likely to be seen as victims or sluts, while gay escorts are allowed slightly more normalcy and glamour), it is visibility. And it looks like he isn't going anywhere."We're business people. We're entrepreneurs. We happen to use sex as our service," he told The Global Post.In a world where corporations are people, let's hope that voices like Brandon's can speak for those that are silenced, to send a clear message: Sex workers are people, too.Image: Josh Brandon/Twitter

More like this
25 Inspiring Quotes From Black Women To Celebrate Black History Month
By Kyli Rodriguez-Cayro and JR Thorpe
24 History-Making Black Women You Probably Didn't Learn About In School
By Ayana Lage and JR Thorpe
6 Organizations Fighting Police Brutality That You Can Support Right Now
By Syeda Khaula Saad and JR Thorpe
These Artists Are Reimagining Black History Month To Create A Better Future
By Katie Mitchell
Get Even More From Bustle — Sign Up For The Newsletter
From hair trends to relationship advice, our daily newsletter has everything you need to sound like a person who’s on TikTok, even if you aren’t.