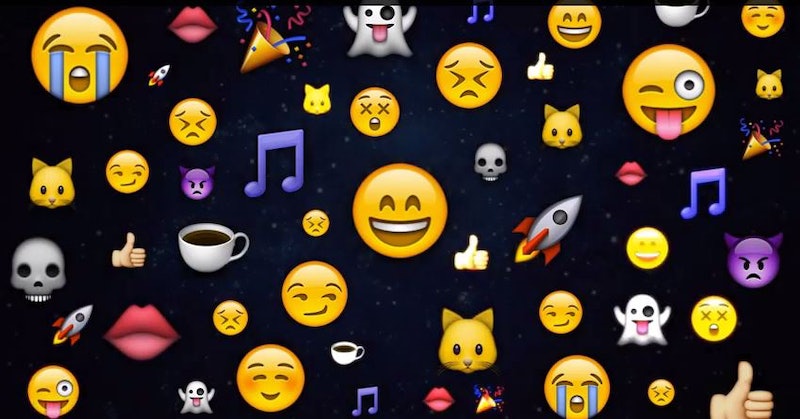 Between Katrina Parrott’s iDiversicons, Kimberly Lynn and Katie Streeter’s Lesbian Emojis, and (debatably) the incredibly NSFW Texticle, loads of apps and art projects have arisen in recent months offering constant texters more options than just the regular ol’ Unicode standard emojis. Now, though, you don’t have to wait around for someone else to make the emojis you always wanted a reality — you can make ‘em yourself. With the new app Makemoji, you can DIY any emoji you can dream up. Awesome? Awesome.

The app, which launches in the iTunes App Store on August 19 with an Android port planned for September, draws its functional inspiration from Photoshop. Anyone who has even a passing knowledge Photoshop will be familiar with the idea of layers; Makemoji works much the same way a Photoshop project does, with each shape you add to your emoji becoming a new layer. This allows you to change, edit, or completely delete details as you go without undoing all of the other work you’ve put in. You also have the option to pick from an array of pre-made emojis, though as Design Taxi notes, that kind of defeats the purpose of installing Makemoji in the first place. Besides, why would you do that when you could, oh, I don't know, make your own reindeer?

As is the case with both iDiversicons and Texticles, actually using your brand new, never-before-seen emojis is a little clunky; you have to select it, copy it, switch over to your text, email, or social media app of choice, and then paste it into the message field once you get there. The good news, though, is that Apple’s latest iOS update has paved the way for a better solution: The team behind Makemoji is working on a way to integrate custom keyboards as we speak, which will eliminate the need to switch from app to app in order to use your brilliant creations. There’s a social networking aspect, as well, and it goes beyond simply being able to sign in using a Facebook account (although that’s part of the package, too): Within Makemoji, users will both be able to share their emojis with their friends and sort through curated collections via its very own social network.

Although Tyler Breton, CEO and founder of Makemoji, told the Daily Dot that the app wasn’t initially intended to address the emoji diversity issue, the fact that it does just that is sort of a fabulous little bonus. By giving users the tools to create their own emojis, it opens up a whole new world of possibility — a world which becomes a veritable multiverse when you factor in those curated collections included in the Makemoji. Plus, the pre-made emojis that come with the app include ethnically diverse iMessage characters. Kudos to the Makemoji team for having the social awareness to create a non-homogenous library themselves; be the change you want to see and all that.

Check out the video below, and find out more over at Makemoji’s official website. Happy texting!

More like this
Why TikTok Is Flooded With Controversial Videos About "Pick Me Girls"
By Courtney Young
26 Ghost Story Podcasts To Get You Ready For Halloween
By Jessica Booth, Mia Mercado, JR Thorpe and Emma Carey
20 Smart Devices Under $35 That’ll Change The Entire Vibe Of Your Home
By Emma Carey
Here's How To Get Your iPhone To Update Automatically Forever
By Emma Carey
Get Even More From Bustle — Sign Up For The Newsletter