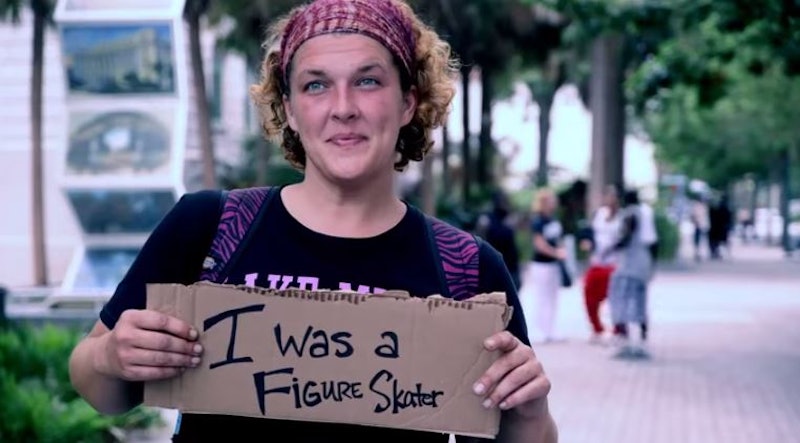 The rate of homelessness in the United States may have dropped between 2012 and 2013, according to the 2013 State of Homelessness in America report — but we’ve still got a long way to go before the problem is solved. More than 600,000 Americans are homeless on any given night; even though the numbers are declining, the gains aren’t universal; and all those anti-homeless laws aren't helping. And throughout all of this, stigma and negative stereotypes about homelessness persist — although thanks to organizations and initiatives like Rethink Homelessness and projects like their “Cardboard Stories” video, maybe we can start knocking these stigmas and stereotypes down, one at a time.

Rethink Homelessness is a grassroots initiative launched earlier this year by the Central Florida Commission on Homelessness, with the goal being exactly what its name says: To prompt a paradigm shift in how we think about homelessness. “We have to admit we thought wrong about who these people are,” CEO Andrae Bailey recently told The Blaze. “We need to change the way people look at homelessness if we are going to find solutions for those in need. The homeless are people, just like you and I, that were usually impacted by some sort of tragedy.” That’s the aim of “Cardboard Stories” — to eliminate the belief that homelessness is the result of laziness, or lack of worth, or any of the other negative stereotypes that cling to the word.

Rethink Homelessness hit the streets of Orlando with a camera, a stack of cardboard, and a bunch of Sharpies. They asked the city’s homeless community to write down one fact about themselves — and the results as seen in “Cardboard Stories” are at once thought-provoking, poignant, heartbreaking, and extraordinarily powerful. One man has built robots. Another describes himself as a “computer geek.” A third holds a degree in biology from West Virginia University. You'll be moved to learn about the lives these people have lived and the accomplishments they've made.

Since the video launched at the end of June, it’s garnered more than 2,500,000 views — but, as the organization wrote on their Facebook page, it’s not just views we’re talking about here. “We call it two million opportunities to challenge negative stereotypes and get people to #RethinkHomelessness,” they write. “#CardboardStories featured just 18 of the thousands of homeless residents of Central Florida. Through many of the comments, messages, and emails we have received, we know that this slight glimpse into these 18 lives has made a profound impact on many of the people who have watched.” They urge us to continue the conversation — and, more importantly, to take action.

For more information and to find out how you can help, head over to the Rethink Homelessness website.