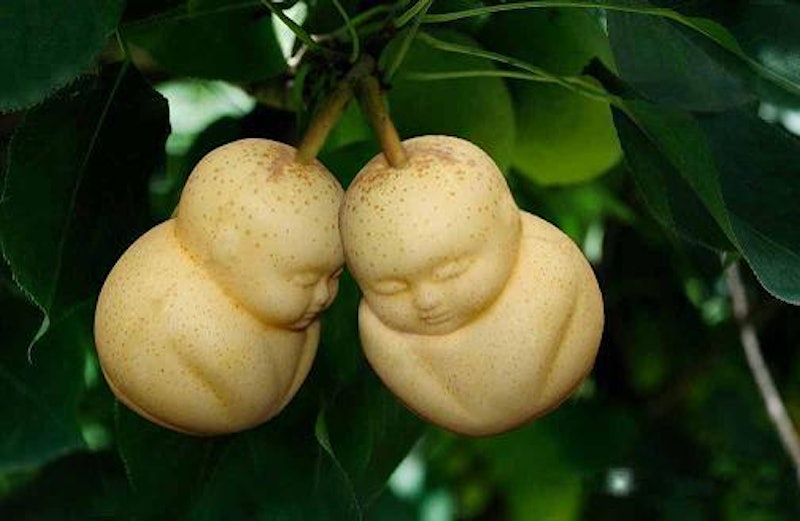 A company in China is bringing a whole new meaning to the phrase "fruit of your womb." Fruit Mould, which is based out of the major city Suzhou, is selling baby-shaped pear molds, in case you want your produce to look like a fetus. Once the fruit reaches its full form and size, you'll have a tiny, edible snack that resembles a newborn human instead of a boring old pear. Are these fruits the apple of your eye, or are they more likely to make you swear off produce forever?

But before we let ourselves freak out too much, it's important to look at the context of these neonate lookalikes. Apparently the inspiration for shaping fruits like this comes from the widely-read Chinese novel Journey to the West which is based off of traditional folktales. In the story, there are magical fruits that grant powers like immortality and flight. Even with that in mind, I think I'd still feel a little cannibalistic sinking my teeth into one of these babes — even though we're also a culture that eats chocolate bunnies for Easter and prints photos of two-year-olds onto birthday cakes in frosting, treats that might be seen as a little strange to others.

The people at Fruit Mould are also the same minds that brought us the underwear just for peaches. There are also various other molds offered by the company. You can order molds for every occasion, including ones to turn your cucumbers into stars and watermelons into squares or hearts. The baby-shaped pears might not be something I'm totally down to try, but with the molds starting at $3, it might be worth a shot. Maybe I'll surprise someone with a gift basket full of these little monsters.