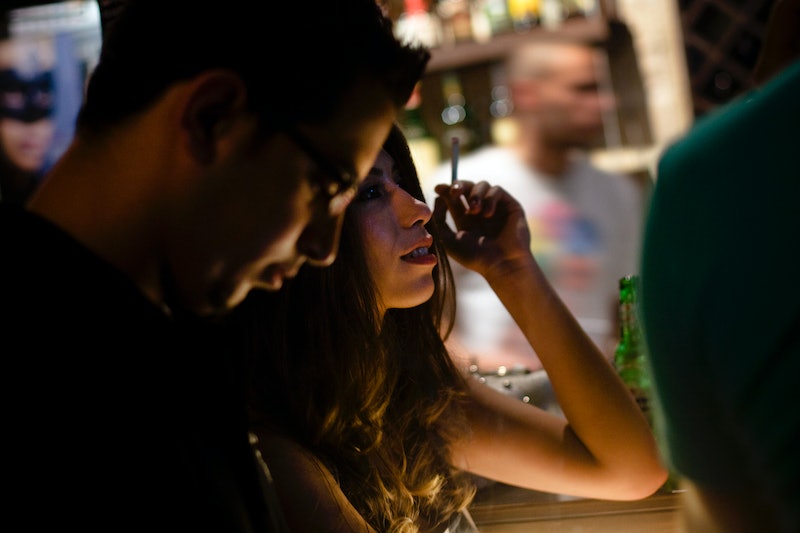 Readers, are you sitting down? Because I'm about to drop a major bombshell . . . I am single again. (You're welcome, straight men.) I know what you're thinking. I see you shaking your heads in disbelief. How is this possible, you ask yourselves. What kind of world do we live in when people like Katie Halper are single for even a second? I, too, find it baffling.

But indeed, after this most recent breakup, I am back on the market, and I am thinking about the takeaways. What have I learned? What did I like? What did I not like? How can I apply these lessons to the future? And I'm writing those takeaways down and posting them for public consumption. Because, in addition to being self-indulgent, narcissistic, catharsis-seeking, and over-sharing, I really want the rest of you to learn from my mistakes.

Plus, I don't know about you, but the biggest dating issue for me has always been sticking to my deal breakers and forcing myself to acknowledge red flags. Once you're in a relationship or even just into someone, it's so easy to sweep things like . . . say . . . alcoholism under the rug.

But no more! I am holding myself accountable. Actually, I am holding you, dear readers, accountable for holding me accountable. Because if I publish my deal breakers, my theory goes, I will not only fulfill a promise to myself, but to you. You are like my AA sponsors, except I'm not anonymous or an alcoholic. This is where the healing starts!

Here are the seven types of guys I will date no more. Say it with me now:

Definition: Someone who has a drinking problem of any kind.

Real life example: When I first met The Alcoholic, he was drinking wine straight out of the bottle. Probably not a good sign.

Definition. The soulless type is someone who behaves in a way that is morally or ethically bankrupt. He is someone you would totally hate if you weren't involved with him in some romantic way. This type occasionally wears his soullessness on his sleeve because he doesn’t even have the self-awareness to know that he should be embarrassed by it.

Real life example: On our second date, The Soulless Type told me how miserable he was with his last girlfriend. I asked him why they had stayed together for so long. He responded, "I really hated her. But I don't regret it. She was a good resume girlfriend." In other words, he had made good professional connections through her. I definitely should have asked for the check at that point.

Definition: Anyone who believes in conspiracy theories without investigating at all whether they're true.

Real life example: At first I thought the Conspiracy Theorist and I had similar political views. But then I realized his views were really shaped by Youtube videos, including one about a shape-shifting body guard who worked for Obama. He also conjectured that George Zimmerman was acquitted because he was Jewish. While I appreciated his interest in anything news-related, George, is not, despite his last name, Jewish. I had already explained this. And also … anti-Semitism.

Definition: The CWDLL thinks his selfishness is a sign of iconoclasm, rebellion, thinking outside the box, poetry, and revolution all wrapped up in one. He will frequently say things like, “What’s in a name?” “What does boyfriend and girlfriend really mean, anyway?” and “I don’t like labels. I never have.”

Real life example: The Cliché was very spiritual, and touchy-feely. He had a poster of dolphins in his room and a sunflower. He would tell me about how he would get drunk off of the stars in the sky at night. He told me he loved me but didn’t want to be exclusive or in a “relationship.”

Definition: This type sees himself as the victim of everything, including things that undeniably require his participation. He prefers dwelling on the past and attributing any and all failure to the actions of others, rather than actually trying to improve his life.

Real life example: The Victim was always upset that he had had children too young. That's understandable. But he acted as if he had been an innocent bystander, forced to impregnate his then-girlfriend not once — but twice! — within the same year.

Definition: This one is eager to criticize himself for not being as good as you. But he's not as eager to actually try to change his behavior in anyway. Also, if you raise any issues, he puts on a self-berating full court press, so that you then have to talk him off of a ledge of self-pity and self-criticism.

Real Life Example: During a fight, in which I explained that something the self-berated did made me feel bad, he responded by saying: "I'm a piece of shit. I'm a piece of shit." This move had become so predictable that I didn't bother trying to talk him out of it.

The "At Least I Didn't" Dude

Definition: The ALIDD is a very male phenomenon. An ALIDD wants credit, and asks for it openly, for not having done something worse than the thing he has done. He'll frequently preface a terrible thing that he didn't do with, "Well at least I didn't," or "I could have," or "It's not like I," or "It could have been worse."

Real Life Example: An ALIDD actually said to me, "Well, at least I didn't stay, have a kid with you, and then leave you for another woman." Give this man a round of applause!

For more tips on love, dating, sex, relationships, check out this video, where I get some tips from a lesbian (Heather Gold) and a straight dude (Josh Gondelman.)

More like this
The Differences Between Kinks & Fetishes, Explained
By Lexi Inks
Are Quality Time & Gift-Receiving Love Languages Compatible?
By Lexi Inks
It's A Pleasure #53: Help! My Boyfriend Won't Tell Me Why He Stopped Going Down On Me
By Sophia Benoit
30 Clever Ways To Slide Into Your Crush's DMs
By Griffin Wynne, Carolyn Steber and Lexi Inks
Get Even More From Bustle — Sign Up For The Newsletter