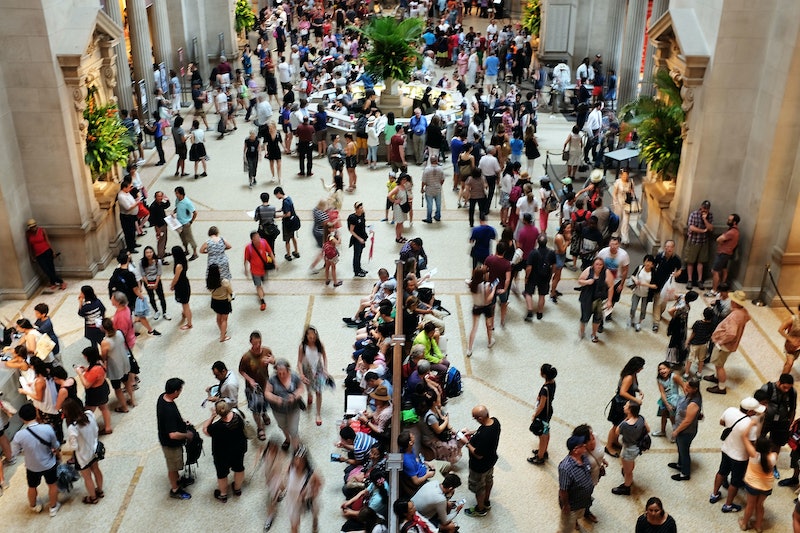 After hearing that a young man in London wanted to lose his virginity in front of a crowd of people, I was convinced we’d seen it all (at least as far as performance art goes). Enter Mischa Badasyan, the performance artist whose latest piece, titled “Save the Date,” involves him having sex with a different man every day for a year. This should be … interesting?

According to HuffPo, the Berlin-based performance artist was inspired by the feeling of emptiness so often associated with hookup culture, as well as his own experiences with it. With “Save the Date,” Badasyan intends to show the connection between sex and loneliness, and use hookup apps and sites (like Grindr) to do so. He also plans on drawing from French philosopher Marc Auge’s theory on “non-places," or, as Badasyan describes for Vocative, "anonymous spots" like grocery stores:

Non-places are supermarkets, shopping malls, airports and other largely anonymous spots where people lose a sense of identity and feel like they don’t belong. In these places, you don’t have to talk to anyone or feel a sense of belonging. That creates loneliness.

In other words: He’ll be having sex with strangers in random, most-likely crowded places. HuffPo notes that by hooking up in these “non-places” over and over with anonymous partners, Badasyan believes he will himself become a non-place ("whoa!" is right).

Now, to answer at least one of your many follow-up questions, yes, he plans on using protection. In fact, he even has a condom sponsor! Badaysan also tells Vocativ that he will not be telling his conquests (subjects?) about his project in an effort to protect their feelings. He also made sure to get tested before commencing with the piece.

Aside from just having anonymous sex, HuffPo notes that Badaysan wants to collect a small souvenir to commemorate each of his experiences — which he will then turn into an installation. He will also film a documentary to follow his, erm, journey.

Controversial aspects of the project aside, he does have decent intentions for the project. Badaysan tells Arts.Mic that he wants to emphasize the importance of "safer sex." He also defends his project by reminding folks that this is performance art, and tells Mic that a "performance artist should always be pushing his own body and the performance."

Personally, I'm not a big fan of the idea, but if Badasyan is passionate about the idea (and he definitely wears condoms), then he should go for it. I, on the other hand, will continue to express my feelings toward such heavy subjects over here, alone, with food!