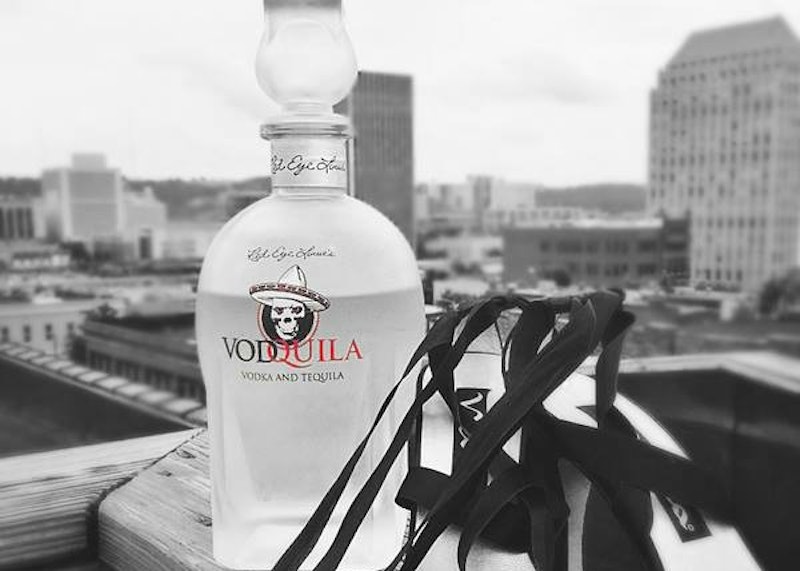 There are a huge variety of mashups out there that I’m fairly convinced came about as a result of a drunken game of “Who Would Win in a Fight?”: The Nintendo Smash Brothers franchise. The upcoming Batman vs. Superman movie. The cronut. And now, I’ve got a pretty good idea of what people drink when they settle in for an evening of pitting their favorite people, objects, and abstract concepts against each other: Red Eye Louie’s Vodquila, a wacky vodka-tequila hybrid. That’s right — now you can experience all the best and worst elements of both liquors in one bottle. Great idea? Awful, terrible, horrible, frightening idea? You be the judge.

According to the Daily Mail, Vodquila is the brainchild of Chander Arora and his daughter, Nina. The idea first came about when Chander wondered idly one night why he had never tried to combine his two favorite beverages — and just like that, the dawn of a new era in questionable boozing had arrived. Nina developed the idea as a project during college, after which her brother Romie came aboard and helped get the whole thing off the ground as a commercial venture. I don’t know about you, but I keep think of it in terms of those honest alcohol labels we took a look at last week. Does this mean it’ll make you bond in the bathroom with your new BFFs right before you all jump on the table and start dancing? Maybe. Also, you’ll probably regret everything in the history of the universe the next morning.

But the question I’m sure you’re dying to ask is this: What does Vodquila actually taste like? As reviewed by Drink Hacker, it’s a little sweeter than you’d think it might be:

“The nose is heavy on the agave, lemony, with an undercurrent of sugar. On the palate, it’s that vodka-fueled sugar that hits you first. Your brain doesn’t know whether to prepare for a sweet, modern-style vodka experience or something else, but before you get the chance to make up your mind, the tequila hits. At first it offers a strong herbal agave character, with more of that lemon, but then comes along a lightly spiced finish that’s absolutely loaded with sweetness — almost like a slice of cinnamon toast.”

I can’t say I’ve ever been tempted to knock back a shot that tastes like cinnamon toast flavored with herbs and lemon, but hey, stranger things have happened. Apparently it’s also tastier than you’d think — so tasty that it took the silver medal in this year’s International Wine and Spirit Competition. Said Ewan Lacey, the competition’s general manager, to the Daily Mail, “Vodquila initially intrigued the IWSC judges in the blind tasting, but the spirit proved it’s no gimmick when it was awarded a Silver Medal. This is a whole new innovation in the spirits industry.” He continued, “It’s outstanding that something initially created for a college project can make such an impact on the spirits market by creating a new category of its own.”

If, like me, you had never before thought to mix vodka and tequila, here are a few cocktails that might benefit from swapping out the individual liquors for Vodquila:

A classic. Sure, you could follow a recipe — or you could just dump in a little bit of everything you’ve got in your liquor cabinet and have at it.

Alas, most extant recipes are just pale imitations of this famed fictional cocktail; it’s worth a shot, though. Just make sure you’ve got a designated driver/booze babysitter on hand.

I’m a sucker for blue drinks.

A variation on the Long Island Iced Tea, plus a little Chambord.

As far as I know, no bears are involved in the creation of this cocktail.