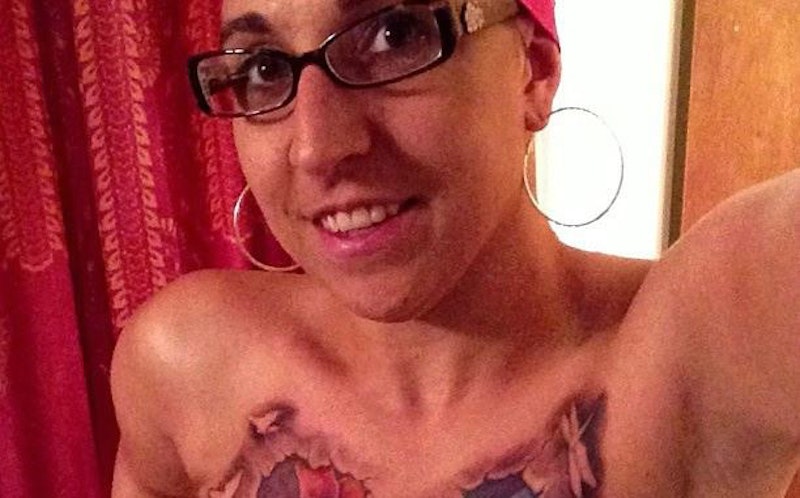 U.S. veteran Barbie Ritzco is an extraordinary human being. A U.S. Marine of 20 years, she was diagnosed with breast cancer during one of her tours in Afghanistan. She ran the 27.5 Marine Corps marathon while she was getting radiation, after eight rounds of chemo, and following a bilateral mastectomy. She has participated in countless projects to raise awareness and support, and she co-founded an empowerment group for women who choose not to have reconstruction after mastectomies. Online, she goes by the handle Marathon Barbie. She is known in her breast cancer community as The Warrior Queen. This is her story. It’s also the story of the many people she has helped along the way. And it’s why we’re trying to make this photo of her go viral.

Ritzco discovered a lump in her left breast right before she was deployed to Afghanistan as a gunnery sergeant. She ignored it, feeling her priorities lay with her unit. When she was finally diagnosed with Stage IIIB Breast Cancer four months later in February of 2011, she left her troops and her unit; she’s still dealing with the feeling that she “abandoned and deserted them” today. Her cancer was aggressive and didn’t respond to chemo, which ultimately lead to her getting a mastectomy. Since she wasn’t planning on having reconstruction done after the operation, she opted for a double mastectomy so as not to be lopsided; a carrier of the BRCA2+ gene, she also had her ovaries removed.

Ritzco told her story in 2012 while participating in the SCAR Project, a portrait series shot by photographer David Jay aimed at raising awareness for early onset breast cancer. It was during this time that she met Sara Bartosiewicz-Hamilton, another SCAR Project participant and BRCA2+ carrier; together, the two of them founded Flat & Fabulous, a Facebook group supporting and empowering women who choose not to have reconstruction after their mastectomies.

A beautiful tattoo adorns Ritzco’s chest, creating the illusion of an open heart and a body filled with flowers. She had it done last year, and she is incredibly proud of it (and rightly so). It looks like this:

Sadly, though, Ritzco recently found out her cancer had returned. She had always wanted this photo of her showcasing it to go viral — and now, in the face of her reoccurrence, her friends, loved ones, and everyone she has helped over the years are banding together to make it happen. Wrote Bartosiewicz-Hamilton on her blog:

“Barbie encourages and gives hope to so many people. Behind closed doors, she really just wanted to help change the world. She did so many things, participated in many projects in an effort to help others — those with cancer, fellow soldiers, the BRCA community and our Flat & Fabulous family.”

And on the public Flat & Fabulous Facebook fan page, she posted the photo and urges users to share it. “As I was debating which photo to use, I chose this one,” Bartosiewicz-Hamilton wrote. “She is quite proud of the tattoo and she wanted the world to see that she is truly FABULOUS. Please, share this photo — she always wanted this to go viral. Let’s help do that for her now.”

So we’re helping — for Ritzco, for the women she has helped, and for those fighting breast cancer everywhere. Won’t you help, too?