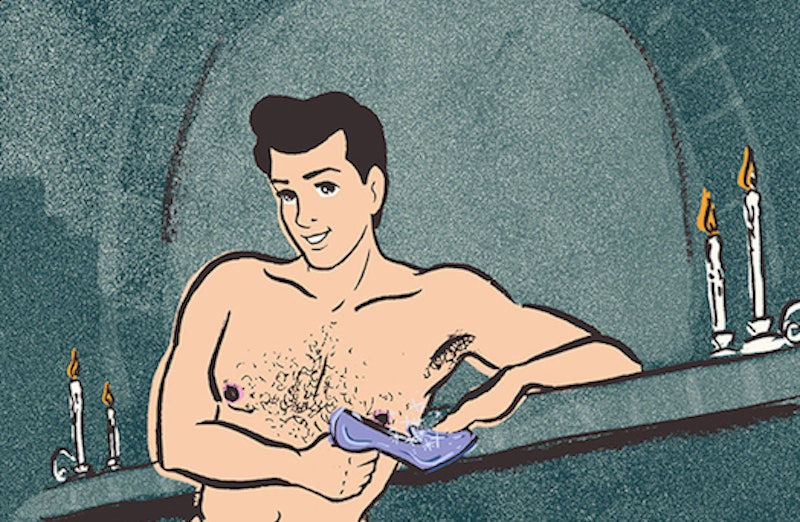 The women of Jezebel have published an illustrated guide to the dicks of Disney princes, and it's everything your horny teenage self would have hoped for. All of the Disney men are included, from Gaston (not really a prince, but go with it) to Prince Hans of Frozen, and, while some may rightly argue that the feminist blogosphere would erupt if someone crafted "Disney Princess Boobs" series, it's a surprising change of pace to see the princes get sexualized for once. After all, Ariel was half naked for most of her movie, and Meg from Hercules had the slinkiest "come-hither" walk I have ever seen on a woman, cartoon or otherwise.

The speculated genitalia of all your favorite animated leading men are drawn with panache by artist Tara Jacoby, who took specific instruction from the Jezebel staff to get the pubes, girth, length, curvature, and dick-to-balls ratios just right.

Obviously, the perfect guy has the perfect dick: like eight or nine inches, thick — but not too thick otherwise it's painful — rock hard with a nice throbbing vein. He's groomed perfectly in a way that's considerate of lovers without being too gay porn-y about it.

And that of Aladdin, always a fan favorite:

His baggy pants have allowed his testicles to grow without constraint, so he has big, huge, droopy balls. He's limp because, like a magic lamp, you have to rub it to get it to do anything. This one's a grower, not a show-er.

All of the descriptions are hilariously spot-on. One of my favorites, Li Shang, the sexy warrior from Mulan, is bestowed with the description: "As a military man, he has very precise pubes. Also, he looks kind of 'roids-y so his balls are like two marbles."

What would Disney think? Hard to say . . . even though these are children's characters, the brand has quite a reputation for hiding penis images in their films. Let's call it a toss-up.

Check out the full roster of Disney princes' dicks here. Sadly for all you animal lovers out there, Simba was not included.