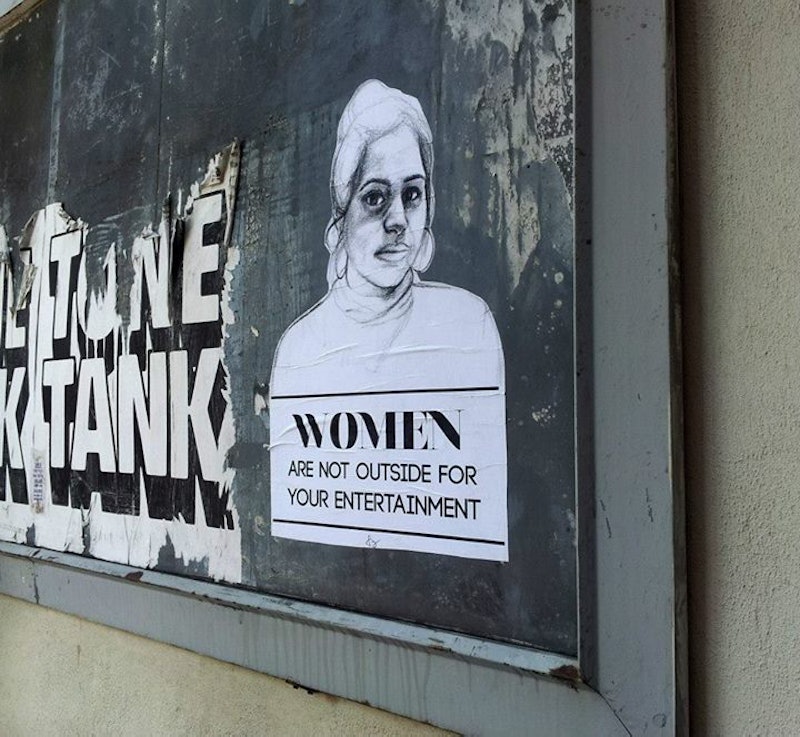 By now, you’ve probably caught wind of New York Post writer Doree Lewak’s inflammatory piece on catcalling. Entitled “Hey, Ladies — Catcalls Are Flattering! Deal With It” — a click bait headline if ever I’ve seen one — it details the ego boost she gets from strangers calling her “hot” and “sexy” as she goes about her everyday life. Lewak is lucky in that her experiences with catcalls have been seemingly 100 percent positive. “When I know I’m looking good,” she wrote, “I brazenly walk past a construction site, anticipating that whistle and ‘Hey, mama!’ catcall. Works every time — my ego and I can’t fit through the door!”

I also consider myself lucky, although for a different reason: I don’t get catcalled very often, and I never have. I will admit that sometimes, it can be kind of nice to receive a compliment from a random person (dude who complimented my outfit choice last weekend? Thank you! I enjoyed wearing it, as well!). But catcalls are not compliments. Objectification is not a compliment. Street harassment is not a compliment. And that's why so many of us are upset about it.

Responses have been flying fast and furious in the less than 24 hours since Lewak’s essay was published. Amanda Marcotte of Slate’s DoubleX blog “apologized” in grand #sorrynotsorry fashion to all the men who have catcalled her over the years (“To my first catcaller: I realize I seemed startled when you told me I had a nice ass. Forgive me. I was but 11 years old and still naïve to the ways of love”). Rebecca Vipond Brink wrote about a story a friend had told her that involved a car full of men yelling “HOT PUSSY!” out the window at a 16-year-old girl. Mary Elizabeth Williams called out everything from the article’s clear intention to provoke to Lewak’s historical inaccuracy (news flash: Slaves didn’t build the pyramids, a fact we’ve known since 2010).

It’s possible that we all would have had a less vitriolic reaction to the piece if it had been framed differently. Wrote one commenter identifying herself as Emma, “I know from experience that catcalls and street harassment like having a huge lorry honk their horn at a sixteen year old girl who's wearing a summer dress is threatening, not empowering. I understand that while you personally feel that you can get some kind of empowerment from catcalls, you do not speak for all women, many of whom feel threatened when a total stranger feels they have a place to comment on how they look.” The emphasis is Emma’s, and it’s absolutely right: It’s awesome that you enjoy being whistled at, Doree Lewak, but don’t call the rest of us unreasonable for not liking it — and certainly don’t tell us to “deal with it.”

There are more stories from the commenters, too. Wrote one under the name Astoria Grey:

“That's really great that you have had such a positive experience and enjoy the street harassment you receive. Maybe it has something to do with being 20 years old when you received your first ‘cat call.’ You were probably in a much better space for receiving attention about your body than I was when it started happening to me. Growing up in NYC, my street harassment began at a much younger age. Men telling me to look at them with my beautiful eyes, or to smile more, or commenting on the length of my shorts. It made me feel exposed and vulnerable and not in control of my own body. I still cringe at how these remarks made me feel and can still make me feel nearly 15 years after they began. And while I'm glad that this behavior makes you feel empowered and sexy perhaps it's time to think about what you're really saying with this article?”

“Ok, because as far as I can tell, this isn't satire....cool, whatever. You are free to respond to catcalls however you want, and even solicit them if that's your preference. I'm glad you've found a way to interact with other people that you find validating. In case that sounds like sarcasm, it's not.

“But telling other women to ‘get over it’ and respond to catcalls (i.e. street harassment) like you do is deeply inappropriate. For some women — particularly women of colour and women living in poor neighbourhoods, who are at a higher risk of catcalls turning into actual physical violence — street harassment is an issue of safety, not preference. There are tons of blogs by WoC documenting this exact phenomenon. I can't imagine that they appreciate you giving permission on their behalf to the catcallers who make their streets unsafe.”

And, perhaps most succinctly, wrote a commenter named Fey:

It's true that writers often don't have any control over the headlines under which their pieces are published; as such, it's possible (likely, even) that the "deal with it" portion of this particular one was added by an editor. But even allowing for that possibility, there is this: Doree Lewak, you might “[Walk] confidently past a mass of men, making eye contact and flashing a smile”; through this body language, you are clearly showing you want to engage with the people you’re passing by. If it makes you feel good, then by all means, enjoy it; the same goes for anyone else in that boat. But know, too, that not all of us want to interact when we’re trying to get from point A to point B. Keeping our heads down, avoiding eye contact, and plugging headphones in our ears are clear indications that we want to be left alone — so why are people still whistling at us, calling out to us, and even pulling our headphones out of our ears? Again: Not a compliment, and not something we should just have to “deal with.”