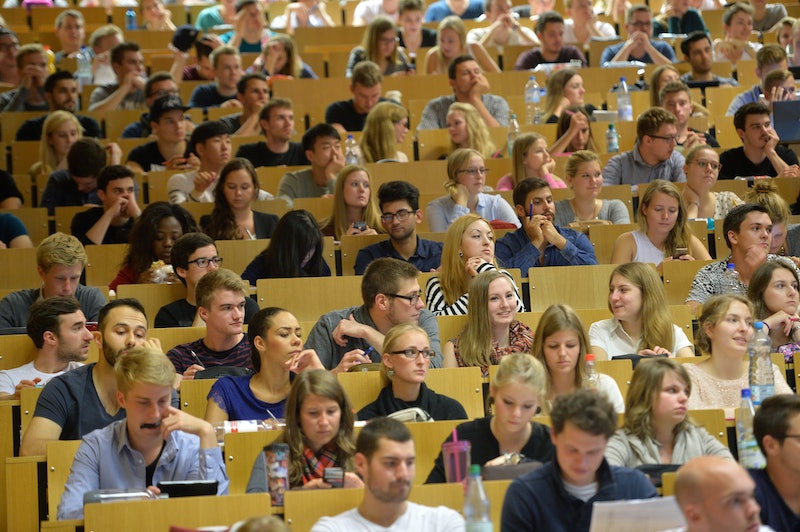 Confession: I love school. I think class is the bee's knees, and I spend hours constructing the perfect schedule. But no matter how much I adore the professor or the subject matter, there are always those few annoying students in every class I definitely don't adore. From the overly zealous know-it-alls to the ones who clearly think they have somewhere better to be, here are the 11 most obnoxious people you'll run into during your own quest for knowledge and truth, guaranteed:

This person doesn't just know everything in the course textbook. She knows everything in every textbook, and she would like to ensure that you'll never forget it. Who can name every single English monarch in order? She can. Who can understand half the languages on the planet? She can. Who's read everything ever written by Derrida? That's right: She has.

Usually, though, the information that she brings up in class isn't even relevant. HGOS just wants to make sure you know she's super smart and worldly, guys.

The Talker is sort of like Hermione Granger On Speed in that his hand is always shooting up. However, The Talker never actually has anything to say. He will ramble on for five minutes straight, baffling everyone else in the room with some kind of illogical point that no one else understands. It probably connects back to his personal life in a deeply uncomfortable way. Does he even do the reading? Doubtful. What's certain is that the sound of his voice is a sweet, sweet elixir to him.

This person is always asking the professor questions. They tend to go something like this: "What's going to be on the next quiz?" "When is our next paper due?" "When do we have to finish this chapter?" This person is infuriating because every single one of those questions could be answered by a quick glance at the syllabus. That's what syllabi are for, people.

Her most frequent comment in class: "It's all a social construct, maaaaaan." According to her, there's no real way to talk about anything effectively because of our cultural biases. "Rationalizing the human experience" and "cultural relativism" are two of her other favorite phrases. She only comes to class half the time. Outside of class, she probably reads philosophy without understanding it and smokes lots of cigars.

Why is she here if communication is impossible? No one knows.

Things that are known to be true: The Earth orbits the sun, gravity gives weight to physical objects, and the frat star will be at least five minutes late to class. Usually, though, it's more like 15. Often, they come in packs, disrupting a lecture, making a ton of noise, and pissing off the professor. They will text while they are there, and they'll make no attempt to hide it. The "water" in their water bottles is probably not water. During discussion, they freely admit that they don't even own the textbook.

The female counterpart to the Frat Star, the Srat Star wears a lot of sundresses and Lilly Pulitzer patterns. Srat Stars will also travel in packs, and though they are always on time, they'll giggle and whisper during the entire class. They chew gum like there's no tomorrow. Every single thing they own is emblazoned with their sorority letters: their Macbooks, their sweatshirts, their water bottles, their backpacks, and so on. You wonder if they have even been branded with these letters.

Unlike almost everybody else on this list, the Wunderkind has something worthwhile to contribute to the discussion. Actually, the Wunderkind could be the whole discussion. Not only does she have the facts down, like HGOS, but she knows how to apply them whenever she contributes to class. She can pick the kernels of meaning out of a Gerard Manley Hopkins poem like that. The Wunderkind is the professor's favorite student — and she's not even trying to be a teacher's pet. She gets As on every assignment.

You would like to hate the Wunderkind because she is so articulate, but dammit, she's always right.

This is the person who is always eating in class. Every. Single. Time. He has a takeout box from the dining hall that is always so full it's dripping, mostly because he's crammed enough food in there for a five-course meal. The aroma of his beef stir-fry will fill the entire room. If you haven't had the chance to eat lunch yet, you will hate him because his food smells delicious and it is tormenting you.

Does this person ever eat outside of class? You aren't sure.

This person rolls out of bed in the late afternoon exclaiming, "Who needs real clothes, anyway? Not I!" She does not appear to own anything other than sweats and over-sized T-shirts. Usually, she'll sit at the back of the classroom (she's another latecomer) and scroll through her Facebook feed while gulping a venti latte from Starbucks.

You can set your watch by this guy, because he will reliably start shoving all his books in his bag five minutes before class is over. The sound of his backpack zipper will cause a domino effect across the room. He is the kind of person who has triggered the professor to declare, in an exasperated tone, "I'm not done talking yet!" As soon as the clock strikes the appropriate moment, he is outta there.

Maybe he's actually a superhero and is running off to fight crime. Unless you are Lois Lane, you will never know.

This person is constantly falling asleep during class. When the TA separates you into groups for small discussions, she'll suddenly wake up, nudge you, and say, "What are we doing now?" She never has a thought to contribute, and hasn't touched the homework or the reading. If you ask her for her thoughts on the latest chapter of your Econ book, she will give you a glassy-eyed stare. You wonder if she is literate.

More like this
15 Easy Pranks To Play This Halloween
By Emily Kelley and Lauren Grant
The Spiritual Meaning Of Angel Number 000, Explained
By Kristine Fellizar
Everything You Need To Know About Angel Numbers
By Nina Kahn and Brittany Beringer
It's A Pleasure #53: Help! My Boyfriend Won't Tell Me Why He Stopped Going Down On Me
By Sophia Benoit
Get Even More From Bustle — Sign Up For The Newsletter