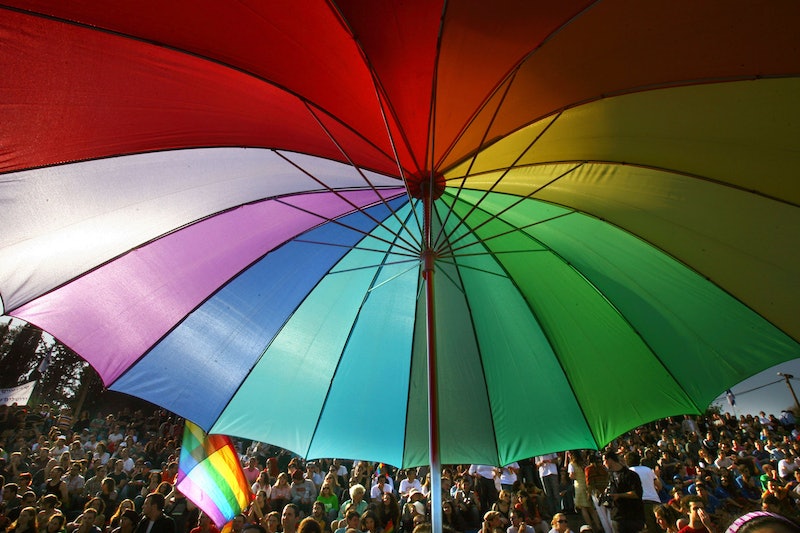 If there's one thing most Americans can agree on it's that everybody hates the Westboro Baptist Church. The group has been known to bring their signature "God Hates Fags" signs everywhere from the funerals of murdered children to the oh-so-evil hot bed of sin that is Silicon Valley. Now, one group hopes to bring a very different message to Westboro's hometown of Topeka, Kansas. Their mission? Put up a "God Loves Gays" billboard, complete with a rainbow, as a way to counter the hate.

The project is currently fundraising on Indiegogo, where they have already almost met their $50,000 goal, which they say will keep the billboard up in Topeka for a full year. And in case the campaign wasn't already enough to enrage the Westboro Baptist Church, the organizers are portraying the campaign as something God Himself wants. The tongue-in-cheek fundraising page states, "BEHOLD! God is tired of having hate-speech put into his mouth by bigots. Therefore, the LORD shall put up a billboard in Topeka, Kansas that declares to all that 'God Loves Gays'!"

This isn't the first time people have deliberately tried bringing counter-messages to Westboro Baptist's own backyard. After all, the house directly across from their church was turned into a rainbow-colored "Equality House" as a way of countering their hateful message.

It's doubtful that these type of messages will ever change the minds of people hateful enough to actually belong to the Westboro Baptist Church. But in a time when people refuse to sell gay couples bridal dresses or wedding cake, where a pastor canceled a gay man's funeral, and where homophobia is given a national platform, putting a little more love out there in the world never hurt anyone.

Plus, the well-muscled, animated God on the Indiegogo page says it's a good idea.

The only question, of course, is whether or not Westboro Baptist will protest the billboard that's been put up to protest them. Now that will be an interesting day.

More like this
The 19 Best Tweets & Memes About Bisexual Awareness Week
By Lexi Inks
An Honest Review of MeUndies Boxers, According To A Non-Binary Person
By Megan Lasher
Pro Footballer Zander Murray Is "Blown Away" By Support After Coming Out
By Sam Ramsden
Chris Kaba's Family Continue Fight For Justice After Viewing Police Bodycam Footage
By Sophie McEvoy
Get Even More From Bustle — Sign Up For The Newsletter