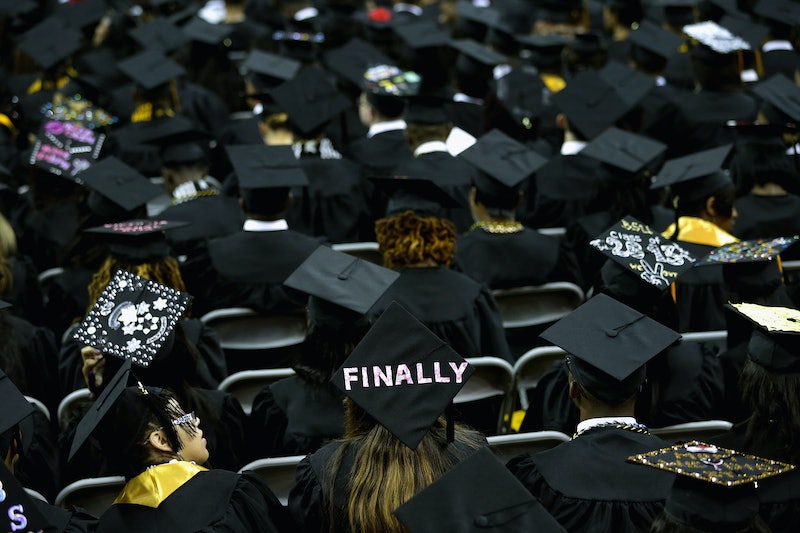 As anyone will tell you, the four years you’re in college (or five, depending on how many classes you botch), are some of the most important years of your life. You’re not only out from under your parents’ thumb for the first time, but you finally get to make some decisions about your life and your future. You’re in control (to a degree) as you make choices about what classes to take, what friends to have, when you’ll go to bed at night, and whether or not you even want to show up to that Friday morning anthropology class at its dreadful 8:30 am time slot. It’s so damn liberating!

But let’s be honest, when it comes to actual learning, nothing is more eye-opening than the real world. In fact, after college, you’re forced to realize that some of what you learned in college is pretty much ... bunk. Not bunk in that it’s entirely useless, but in that college is a bubble and graduation is the day that bubble pops. It’s a scary truth, but one worth accepting now, especially because it will force you to really live it up while you’re still in school.

So, what are some of the things about college you can expect to learn after college? Here are 19 of them.

HAVING TO MEMORIZE YOUR SSN WAS ACTUALLY PRETTY USEFUL

It was totally a struggle at first, but well worth it, because for the rest of your life, your name will be secondary to this identification number.

NO ONE CARES REALLY IF YOU’RE ‘WELL-ROUNDED’

Yep, all those "necessary" electives you had to take to make you "well-rounded" were a total waste. No one cares if you got an A in pottery!

NOR DO THEY CARE IF YOU FAIL

Remember how your professors and counselors were genuinely concerned about your future? Don’t expect anyone else (except mom and dad) to be that invested again.

BEING FORCED TO CHOOSE A MAJOR IS dumb

At 18, you either have no idea what you want to do, or you'll totally change your mind by the time you're 25.

YOUR COLLEGE ROOMMATE WASN’T THAT BAD AFTER ALL

Especially compared to being back at home with mom and dad.

THE WORLD DOESN’T BELIEVE IN EXTENSIONS

You may have been able to sweet talk your way into another week for your honors thesis, but your boss is going to laugh in your face.

NOR CAN YOU NEGOTIATE A BETTER GRADE in real life

Bad review? A boss who tells you your work is only average? Sorry, grade-grubber, you can’t finagle your way out of it anymore.

EVERYTHING TASTES LIKE CHAMPAGNE AFTER FOUR YEARS OF BUD LIGHT

But, for some reason, you'll still crave it occasionally.

YOUR COLLEGE HANGOVERS WEREN'T SO BAD AT ALL

You know how your hangovers from freshman to senior year got worse? After college, you’ll start experiencing the two-day hangover.

You can't even call in sick. WTF.

So weird how college actually made you believe that four hours a night was sufficient enough to function properly. Lies!

MAKING FRIENDS will never be that easy again

and neither will DATING

One-night stands will never be a problem, but actual dating is a whole other ballpark.

You really do miss Mac n' Cheese Thursdays, don't you?

COLLEGE REALLY IS YOUR LAST CHANCE TO BE A KID

I mean a real kid, like the kind whose parents pay for your rent.

and it really doesn't really PREPARE YOU FOR THE REAL WORLD. AT. ALL.

And here you were thinking you were being prepared for adulthood. Nope, that's what the year after is for.

sallie mae was never on your side

and most of all, while you thought you appreciated summer break, you didn't.

Oh, if you had only realized the full potential of three months of freedom!

More like this
The Spiritual Meaning Of Angel Number 000, Explained
By Kristine Fellizar
Isa Guha Is Taking The Lead
By Charlie Mock
This Psychological Effect Might Be Keeping You From Hitting Your Goals
By Lexi Inks
The 5 Best SLS-Free Toothpastes, According To Dentists
By Amy Biggart and Danielle Calma
Get Even More From Bustle — Sign Up For The Newsletter