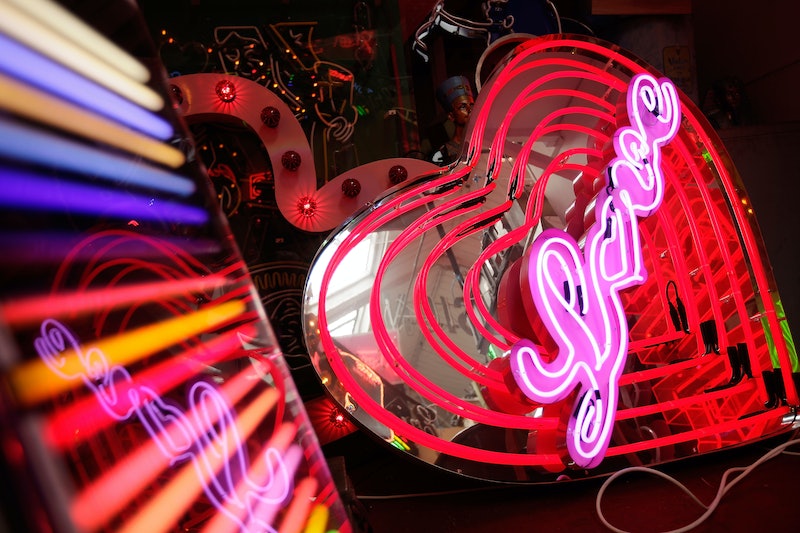 From new sex positions to grapefruit blow jobs, it seems as though everyone wants to know the secret to having better sex. However, new research suggests that it could be as easy (or should I say, as freaking hard) as falling in love. Yep, according to a recent survey, most heterosexual women believe that love is the key to good sex.

The Daily Mail recently reported that a study conducted at Penn State Abington found that 78 percent of heterosexual women ages 20 to 68 think that love equals better sex — whereas 18 percent believe that love isn't necessary in a sexual relationship. For the study, Beth Montemurro, an associate professor of sociology at Penn State, conducted in-depth interviews with 95 women between 2008 and 2011.

Montemurro tells Penn State News that, for some women, love "enhances" the physical side of sex, while also making them feel less inhibited:

"When women feel love, they may feel greater sexual agency because they not only trust their partners but because they feel that it is OK to have sex when love is present," Montemurro said.

Montemurro also explains that, despite advances made as far as women's rights in the last century, our culture (and the media) are somewhat responsible for sending the message that "love and sex must go together, no matter what, amen!" Though casual sex has become popular in the media more recently (Google: Rihanna), Montemurro believes that, for the most part, the old message is still reaching women:

"On one hand, the media may seem to show that casual sex is OK, but at the same time, movies and television, especially, tend to portray women who are having sex outside of relationships negatively," said Montemurro.

This isn't the first research to find that most heterosexual women prefer sex with a partner they're in love with — or at least dating exclusively. According to Salon, two different surveys — both focusing on college students — found that women in serious relationships are more likely to reach orgasm than those in casual ones. A blog piece for the New York Times sites sociologist Paula England's observation that that "practice with a partner" could help reach that orgasm, as opposed to lack of communication usually experienced during casual hookups. Hm...

Sure, love can help out a lot when it comes to sex, but so can communication, comfort, chemistry, and practice. I'm no sociologist or "sexpert", but seeing as the the whole "practice makes perfect" idea works for so many other aspects of life, perhaps it could between the sheets as well.