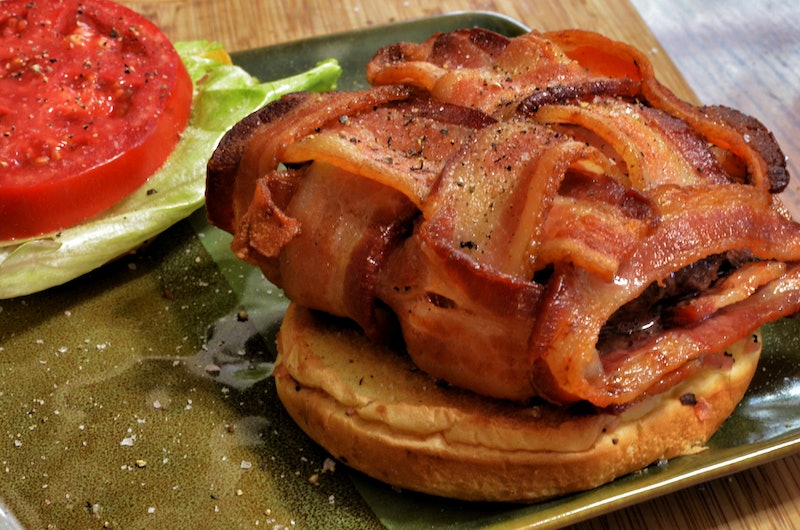 OK, yes: If you aren’t a carnivore, bacon does not, in fact, make everything better. For those of us who are, though, the statement “bacon makes everything better” is almost always true (there are probably some exceptions, but I honestly can’t think of what they are — so I’ll just open the door to the possibility, no matter how unlikely I think it is, and leave it at that). And hey, guess what? A soon-to-open restaurant in Montreal has cottoned onto that fact and made it their raison d’etre: Bar Brutus’ entire menu features bacon on every. Single. Item. Is not that one of the most glorious things you’ve ever heard? Seriously, you guys. I’m drooling over my keyboard as we speak.

The owner of this magnificent creation, Anthoni Jodoin, drew his inspiration from the revival of classic male barber shops that’s apparently going on right now (I was hitherto not aware this was a thing, but, hey. TIL, right?). Accordingly, he told ABC News, “We figured bacon is the manliest of meat, and there’s a trend attached to it obviously. We wanted to make it approachable and friendly, but with a classy and refined vibe. We figured by adding bacon, everyone is happy.” Which isn’t, of course, to say that you have to be a gentleman to enjoy the gentlemanly theme Brutus has going on; au contraire. Bacon is the great equalizer, after all.

Bar Brutus is still waiting on its liquor license, which, according to BuzzFeed, could get approved “anytime from tomorrow to next month.” But once that happens, we can look forward to consuming everything from Jagermeister Poutine:

Which features bacon, caramelized red onion, cheese curds, and Jagermeister sauce served over fries (the serving dish made from an old Jager bottle is a nice touch);

Which consists of bacon wrapped around chicken confit, dates, and celery, with soy mayo, maple syrup, and Dijon mustard served alongside it;

And from bacon donuts:

Because donuts plus bacon equals magic;

Which comes with a rose fashioned out of bacon, even though Gothamist thinks we should all stop garnishing our Bloody Whatever drinks with crazy food items.

“I’m confident it’s going to become a bacon mecca,” Jodoin told BuzzFeed. “That’s my goal. If you’re a bacon lover and you’re in Montreal, you will know that you have to come here.” I would like to expand that statement and say that if you’re a bacon lover and you aren’t in Montreal, you still have to go there at some point in your life. Make having a sit-down at the bacon restaurant one of your bucket list activities. I’m certainly adding it to mine.

Bar Brutus’ website is still under construction, but you can take a look at more of the mouthwatering, bacon-tastic dishes it’s planning on serving over at its Facebook page. Now if you’ll excuse me, I have to run a quick errand to the grocery store in order to assuage my sudden and intense craving for crunch, crispy, bacon-y goodness.