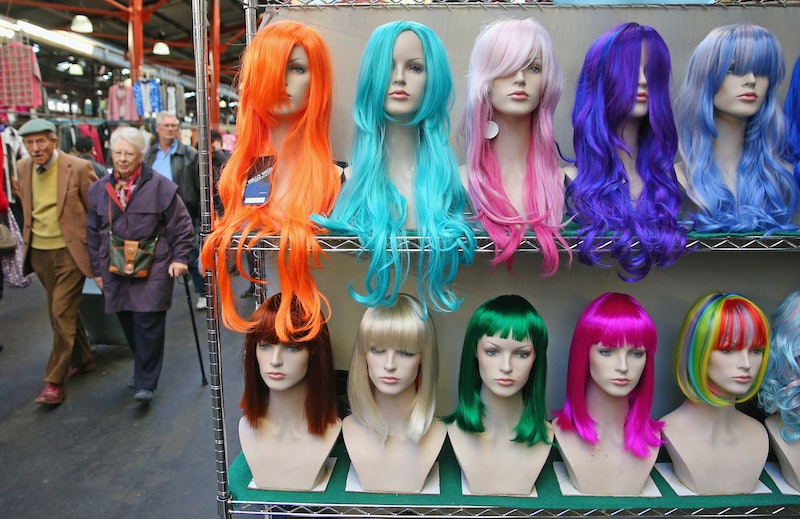 To understand my grandma Shirley, you must know that she bought her cemetery plot when she was 74 years old. She was in perfect health, with a full head of snowy curls and a stain of hot pink lipstick drawn on her mouth. If she were here sitting here today, she’d chime in, talking over you with her mouth full, and let you know that she bought the plot early because it was a good deal.

“There’s a lot of advantage to preplanning,” she’d go on. “You get your pick of the real estate.” As if six feet underground in Carmel, Indiana, was somewhere she really wanted to go.

She had long coveted the spot directly across the street from the Dairy Queen on Rangeline Road. Getting the right slice of land at the cemetery when you are in your early 70s must be akin to some sort of geriatric American dream.

“That way, you can get a sundae before you come by,” she’d say as she drove you by the cemetery in her cloth-top Cadillac. She liked to pull in and have you walk up the steep hill so you could take a look and oooh and aww. She liked to bring everyone to the plot and stand there with us, as a kind of practice round.

“And, of course you’ll bring some flowers and keep it nice,” she’d say pointing her finger at you.

One of my clearest memories of that time — before we knew that the tumors were something we couldn’t stop; before she lost more than 50 pounds; before she laid in bed in the dark for days at a time — was how she let us take her wig shopping, knowing full well she was going to die.

She was still working as a secretary for a homebuilder then and talking about losing 20 pounds. She had just bought these new violet couches she’d always wanted for the formal living room and was requesting that no one sit on them for fear of “messing them up.” (My grandpa finally convinced her to take the plastic shrink wrap off around the holidays so the family wouldn’t have to sit on the floor.)

“Get off of there!” she’d snap if she caught you getting too comfy on them as she passed by. She was a screamer of the most loving kind.

“Now, don’t eat that,” she’d say, slapping your hand away when you’d go to get a handful of the decorative candy from the crystal dishes scattered around the house.

It was the spring after she’d gotten the purple couches that she told us she had cancer. We acted like no family had ever gone through what we were facing before. We did that thing where we felt really sorry for ourselves and told everyone we knew. And then, after we realized that would fix nothing, we sprung into action and made a game plan.

For the first time, my bossy grandmother — the woman who had come over to my house every Christmas just to sit and direct my mother how to decorate our tree — let us try to figure out how she’d survive. We bought a giant calendar and sat around the oak table and made a plan. Everyone had their role. We made arrangements for chemotherapy and homemade meals. There were volunteers to pick up medicine and hold her hand. Everything was scheduled, everyone was set. We had a strategy, a system, an infallible scheme to beat this by.

“Oh, it’s really curable Stage 3 or something,” she told us when we visited. It turned out to be inoperable Stage 4.

One of my clearest memories of that time — before we knew that the tumors were something we couldn’t stop; before she lost more than 50 pounds; before she laid in bed in the dark for days at a time — was how she let us take her wig shopping, knowing full well she was going to die.

My mother and I were convinced that it was what she would want as she started to lose her beautiful, full hair. She had always been about new blouses and silver jewelry and maintaining her style. As I grew into a teenager, she and I would stand in the bathroom with towels on our head, passing Clinique face powder, lipstick, and curlers like we were part of the same sorority.

“Try this,” she’d say, pulling some clear gloss from her drawer and smearing it across my lips. I’d pucker, and wait patiently for the magic she unfurled.

The wig shop was in one of those strip malls, in between a Dress Barn and a UPS. Inside the carpeted shop, styrofoam human heads covered the exterior of the walls. There were pink wigs for women who wanted to be silly, and dominatrix-style ones for women who had something else in mind.

I looked fervently around the room for one that looked just like my grandma. I wanted it to have big white curls with flecks of gray. It needed to be longer, but not quite shoulder-length. My mom and aunt were having way too much fun. They had Grandma trying on brunette bobs and hair for someone half her age. My mom thought it was amusing to do it all in an island accent wearing a Rastafarian wig.

I burst out laughing at the sight of my mother rocking dreadlocks and highlighter-colored beads, forgetting for a moment the reason we had come.

Perhaps fearing we were getting a bit out of control, the sales clerk wandered over to check in on our team.

“Do you have a special occasion?” she asked. She couldn’t have been much older than me.

Eventually, we got down to business, forming our own bossy assembly line. I brought the wigs, mom fitted them, and my aunt tried clumsily to place them back on straight to the mannequin heads. One after another, my grandma sat as her girls dressed her up. All the while, she wore a smile.

“Too big, too white, too gray, too straight,” she’d say. It sounded like a million conversations we’d had shopping for anniversary outfits, graduation dresses, and wedding gowns.

When my grandma tried on the frosted bob with the wispy shadows of gray, everyone knew we had found the one.

It wasn’t identical to the curls we’d come to know, but it was bold and new. It framed her high cheek bones. The wig made her look younger, like she had a new lease on life. It seemed promising.

I wanted our shopping game to keep going forever. I wanted her to keep trying them on. I didn’t want to acknowledge what came next — the unknown.

The cancer came on fast, and by that fall she was gone. She never wore the wig.

If she felt well enough to go outside, she’d wear little pink handkerchiefs that covered her fair scalp from the sun. In the house, she walked around uninhibited by her hairless head. It forced you to focus in on her face, her creeping skin, and piercing eyes I'd once covered in thick puffs of blue eyeshadows while playing dress up. When she wasn’t sleeping, she would just hold your arm. I memorized her perfectly round scalp.

The wig had been for us all along. One last, good memory to bring when I visit her plot across the street from the Dairy Queen. I carry it with me, along with a hot fudge sundae. Just like she wanted.

More like this
12 Easy Halloween Costumes You Can Wear With A Denim Jacket
By Kirsten Nunez and Bustle Editors
The 5 Best Sheets For Your Purple Mattress, According To Reviewers & The Brand
By Vanessa Spilios
Bustle Newsletter: September 23, 2022
By Stephanie Talmadge
10 Ways To Be More Empathetic To Your Partner
By Raven Ishak and Lexi Inks
Get Even More From Bustle — Sign Up For The Newsletter