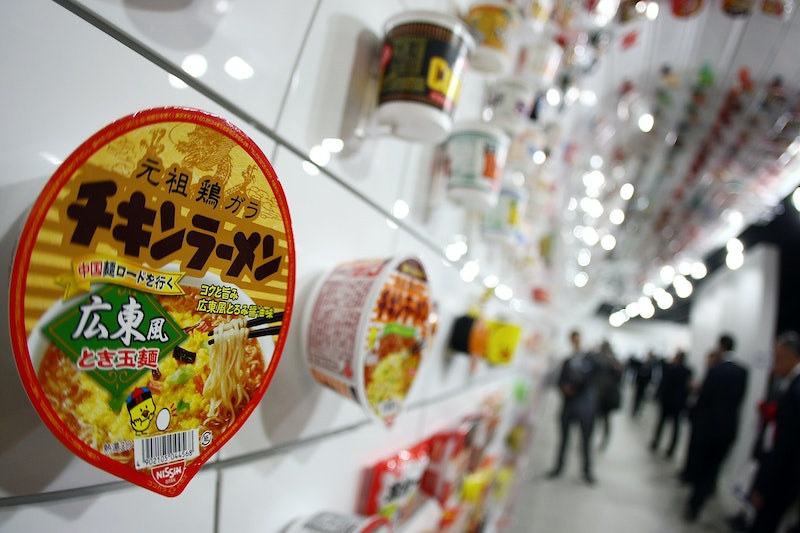 Bad luck for all you ramen fans out there. According to a new study out of South Korea, your favorite college staple, instant noodles, could increase your risk of cardiometabolic syndrome, which can involve anything from abdominal obesity to high blood pressure and high cholesterol. And since that means it can also increase your risk of diabetes and heart disease, that's definitely not good at all.

The study, which was published in The Journal of Nutrition, looked at the eating habits of over 10,000 adults in South Korea, and originally looked at traditional diets as opposed to diets rich in meat and processed food. Though neither diet on its own significantly increased a person's risk of metabolic syndrome, the researchers did find that women who eat instant noodles at least twice a week were 68 percent more likely to develop the condition. And, oddly enough, this pattern only held true for women; the men were exempt, lucky bastards.

Of course, South Korea is the world's largest consumer of instant noodles, so this is an especially big potential problem there. Still, people in the U.S. could also be affected, especially college kids who notoriously eat ramen all the time.

"Instant noodles are high in fat, high in salt, high in calories and they're processed — all those factors could contribute to some of the health problems [the researchers] addressed," said Lisa Young, a nutritionist from New York. "That doesn't mean that every single person is going to respond the same way, but the piece to keep in mind is that it's not a healthy product, and it is a processed food."

Which ought to be pretty intuitive, but still isn't great news for people who can't get enough of the stuff.

Moral of the story is that it might be time to ween yourself off of ramen. It may be delicious, cheap, and easy to prepare in a dorm room, but it also might be killing you.