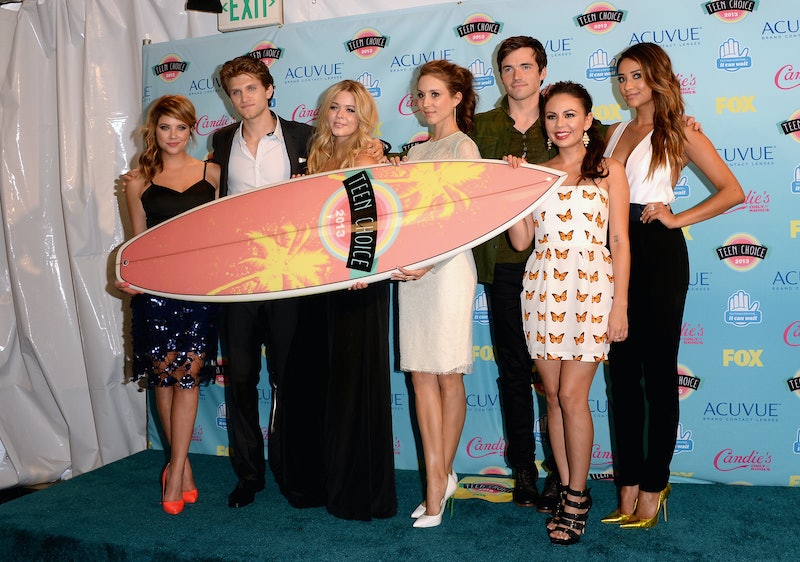 WWD reports that ABC Family has teamed up with Wet Seal for a line of apparel and accessories inspired by characters from their hit shows The Foster, Switched at Birth, and Twisted. If you're anything like me, your first thought was likely, "What about Pretty Little Liars?"

Out of all the ABC Family shows, Pretty Little Liars is objectively the one with the most distinct fashions. Some examples of the missed opportunities that could have been in the Pretty Little Liars Wet Seal collaboration: a red coat, Aria's comic book dress, Emily workout wear, equestrian boots à la Spencer, and Hanna heels. Boom. Done. Nailed it. Instead, we're getting graphic tops and pencils skirt, like the cast of Twisted — and nobody else ever — wears, and motorcycle jackets, because somebody once wore one in an episode of Switched at Birth, probably.

The line will launch in October, which is when you can also picket outside Wet Seal and demand a Pretty Little Liars inspired line, as you do when you're a well-adjusted, mature 22-year-old.

More like this
Dapper Dan’s Sold-Out ‘DAP’ GAP Hoodie Is Finally Back In Stock
By Dominique Norman
The 'PLL: Original Sin' Creators Say A’s Identity Will Be “Very Clear” By The Season Finale
By Alyssa Lapid
Every Horror Movie Reference In The 'PLL: Original Sin' Premiere
By Alyssa Lapid
Most Comfortable Underwear For Big Butts
By Audrey Williams
Get Even More From Bustle — Sign Up For The Newsletter