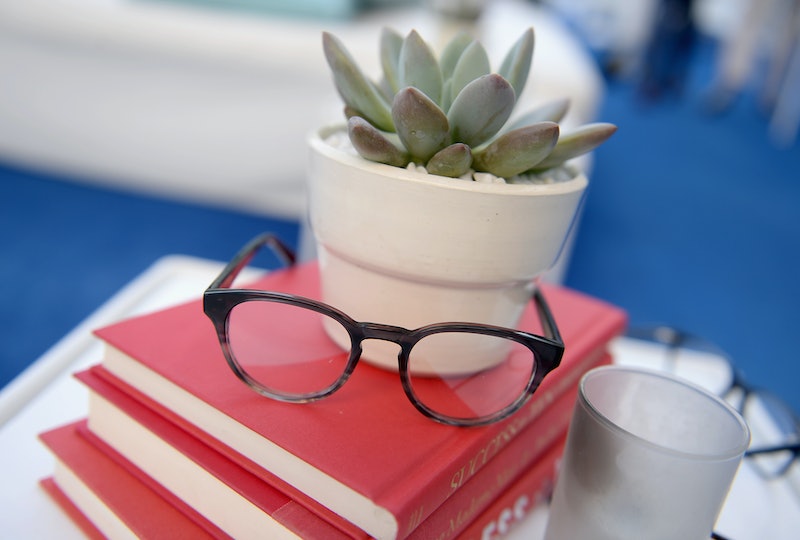 I’m extremely nearsighted, so eye examinations always feel like tests I’m doomed to fail. Some people dread the drops that dilate their pupils, while others can't stand the glaucoma screenings that administer a puff of air directly onto their eyeballs (yikes). For me, it’s all downhill once the optometrist places that pimple-causing batman-like contraption in front of my face for the visual acuity test. That's the part in which, one eye at a time, I’m supposed to read a chart featuring eight rows of letters displayed in descending font sizes.

I can quip the first five lines in a breeze: E! H! N! D! F! and so on. From there things get a bit murky, as I start inserting a question mark after each character I sort of see. Ohh? Ehhhf? Four? T-Rex? By the second-to-last line, I spare myself further humiliation and steer the oily lens holder away from my face. It's time to level with the optometrist with some real talk. “Look, these all look like Wingdings to me... ”

We move forward with the appointment, while she attempts to identify the right prescription for my remedial vision. She fiddles with settings, magnifying the problem row and narrowing it so that only three letters are visible. (Damn, that was a P, not a T-Rex! I think.) “Now, which is clearer: This way or that way?” she asks as she shifts the lenses. I ask to review my options again. "This? Or that? ... Thiiiiis or that?" Half the time I am honest and say that they look exactly the same — like a blurry F, N, and P that were typed out in Print Shop circa 1996. The rest of the time I pick This or That at random since that's always been my trusty strategy for True/False exams.

At the end of my appointment, I receive results that confirm my weak vision. The piece of paper says -12.75 (left eye) and -10.75 (right eye). It’s not written in thick red ink, but it might as well be an F. "I can't have the worst vision you've ever seen!" I say hopefully. "Hmm, I'm trying to think of a worse one... " she responds.

My case may be extreme, but you don't have to be deep in the spectacled spectrum to relate with one or more of these poor eyesight experiences:

1. You squinted your way through pre-school.

Wearing glasses when you were 4 years old made you feel like a loser — until you realized that the ability to watch crystal clear episodes of She-Ra: Princess of Power was a GAME CHANGER.

2. Your mom made you get the clear plastic frames because they were cheapest.

If only you could tell your younger self that one day they would be coveted by grown adult hipster women.

3. If you wore contacts, you waited until the last minute to pop them out at sleepovers.

No one was used to seeing you in glasses.

4. But now you know that spectacles give you superhero powers.

And you own it!

5. You automatically get smartest-person-in-the-room status.

You shall have a pair for every mood.

6. Except that you were devastated to find out Warby Parker doesn't make lenses in your Rx :(

7. You are resigned to shelling out $600 to sand down your lenses so they don't look like magnifying glasses.

Yes, it costs THAT much. Even with insurance.

8. And your eyes look six times as tiny.

You just have to "side eye" twice as hard.

9. You reach for your glasses the minute you wake up.

Otherwise it's totally possible that those sunrise shadows in your apartment are poltergeists.

10. You secretly like removing your glasses at the office and not seeing a thing.

It's like throwing a sheet on a birdcage — you can withdraw from the world and block out annoying coworkers for a few minutes.

11. Your prescription sunglasses are your prized possession.

That time you lost them? YAAAAAAAAAOOOOOW.

12. You secretly fear a zombie apocalypse.

If you ran out of disposables or shattered your glasses, you would flee right into a flesh-eating zombie.

13. You accept the fact that you wouldn't have survived your 10th birthday had you lived during the Middle Ages.

Acuvue wasn't yet invented. You would walk right into the path of an oncoming horse.

14. New friends will inevitably ask to try on your heavy-duty blinkers.

Hey, you're a hit at parties.

Spoiler: No. No, I cannot. Their faces appear as feature-less blobs.

16. When it's time to get stronger lenses, you can see more clearly when you angle your specs.

You usually only do this during secret alone time... but sometimes you slip and walk around a bar like this.

17. You feel smug when you find out someone wears non-prescription glasses to achieve a "look."

'Cause you're the real deal.

18. Even if you sometimes put on contact lenses in the morning just to apply makeup. Then you pop them off, put on your glasses, and go.

And you won't be judged. It's impossible to apply liquid liner without seeing anything.

More like this
The Spiritual Meaning Of Angel Number 000, Explained
By Kristine Fellizar
6 'Game Of Thrones' Halloween Costumes That Aren't Overdone
By Nina Kahn
10 Stranger Things-Inspired Halloween Costumes For True Fans
By Emma Carey
Bobby Berk Explains How To Maximize Every Inch Of Your Bedroom Storage
By Marilyn La Jeunesse
Get Even More From Bustle — Sign Up For The Newsletter