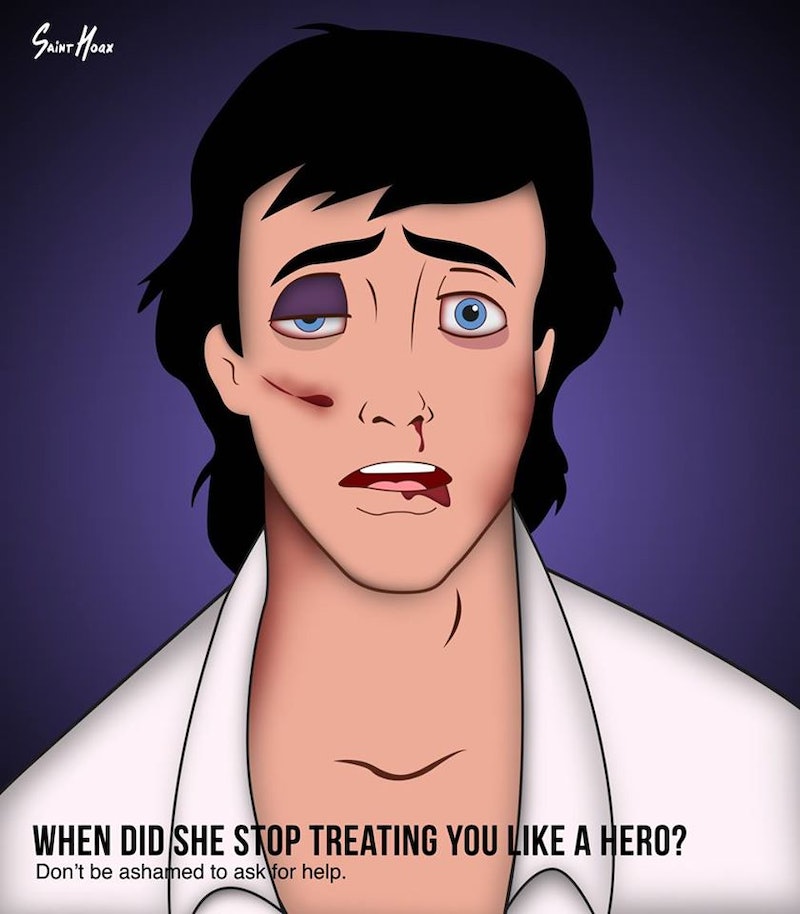 Middle Eastern artist Saint Hoax has been making waves in recent months with his series of campaigns that repurpose Disney characters to raise awareness of sexual abuse and domestic violence. After tackling the issues in “Pr incest Diaries” and “Happy Never After,” he’s at again — and this time, he’s broadening the scope of his projects. “Prince Charmless” targets men who have experienced domestic abuse, tearing down stigma and again urging victims to speak up.

In many ways, “Prince Charmless” mirrors “Happy Never After”; they use similar taglines (“When did he stop treating you like a princess?” in one; “When did she stop treating you like a hero?” in the other), and both urge victims to come forward. They do differ in the reasoning behind speaking up — for the “princesses,” the idea is that it’s never too late to take control and put an end to domestic violence, while for the “princes” it’s about not being ashamed or embarrassed to speak up — but they’re not intended to present a side-by-side comparison. Rather, the intention is to focus on the challenges unique to each situation. Notes the Mayo Clinic:

“Because men are traditionally thought to be physically stronger than women, you might be less likely to report domestic violence in your heterosexual relationship due to embarrassment. You might also worry that the significance of the abuse will be minimized because you’re a man. Similarly, a man being abused by another man might be reluctant to talk about the problem because of how it reflects on his masculinity or because it exposes his sexual orientation.”

Like many, I’ve found the previous two series, “Princest Diaries” and “Happily Never After,” effective; I have also, however, wondered why male victims weren’t part of the equation. It’s true that according to the National Coalition Against Domestic Violence, 85 percent of domestic violence victims are women — but according to the same organization, one out of 14 men have also been physically assaulted by a spouse, partner, or date. If the point of campaigns like these is that domestic violence can happen to anyone, and that no one should be afraid of speaking up (both of which are true), then the campaigns need to be inclusive.

Hoax, too, noticed this disparity; accordingly, “Prince Charmless” is intended to address it. Said Hoax to the Huffington Post: “We continuously see campaigns about abused women but rarely encounter any campaign that targets male victims of domestic violence. I only knew about these statistics about abused men last month after doing an intensive research around the subject. The information wasn’t out there, I had to dig for it.”

And there’s still more to tackle, as well: As Mic pointed out, “Hoax could take a note from fellow artists who [have] made Disney characters queer-friendly.” All three of Hoax’s series deal exclusively with heterosexual relationships. But the National Coalition Against Domestic Violence reports that 40 percent of gay and bisexual men will experience abuse from a partner; furthermore, according to the CDC, 37 percent of bisexual men and 26 percent of gay men report suffering physical violence including rape and stalking. Jose Rodolfo Loiaza has put Disney characters in LGBT context to great effect; Hoax might be able to, as well.