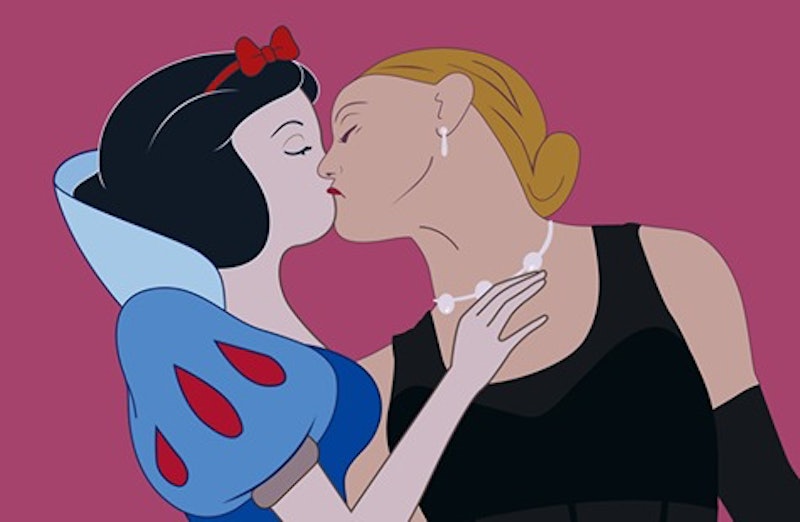 Pseudonymous Middle Eastern artist Saint Hoax is well known for his use of Disney characters to comment on the goings-on of the world — but not all of his work has been part of his recent campaigns raising awareness for sexual and domestic violence. Sometimes he takes on other elements of pop culture as well, a in the case of his “Like a Virgin/Televicious” series. The series depicts Disney princesses like Jasmine, Snow White, and Ariel locking lips with Madonna in an homage to the kiss the pop star shared with Britney Spears during the 2003 MTV VMAs. These images aren’t new — they were first posted to Hoax’s Facebook page in March of 2014 — but since the VMAs just happened and we’re currently talking about Hoax’s latest project, "Prince Charmless," now seems like a good time to revist them.

“Like a Virgin/Televicious” puts me in mind a little bit of Jose Rodolfo Loiaza’s work; rather than pairing the characters with others from the Disney universe, however, they combine beloved fictional characters with… well, maybe not “beloved” public figures, but public figures about whom many people have rather strong feelings. Although I’m not sure if she’s still referred to as such now, Britney was known at her height as “the Princess of Pop.” Subbing out one princess for another seems like the logical next step; here are the results:

At the time of the Madonna/Britney kiss itself, the world — or at least the pop culture-obsessed part of it — went nuts. What I think “Like a Virgin/Televicious” is getting at is whether we’d still have the same reaction now. With Britney and Madonna? Probably not. But pairing Madonna with “innocent” Disney gals brings up the same sort of “OMG IS THIS FOR REAL??? NO WAY!!!!!” hysteria that the original event did. I’m not totally sure if the pieces ultimately say more about how far we’ve come in the past 11 years or how easily we still revert back to how we felt then, but either way, it’s interesting.

Anyhoo, there’s your trip down memory lane this bright and sunny Monday morning — check out more of Hoax’s work over at his website, and read more about his latest series, “Prince Charmless,” here.

And in case you need a little reminder...