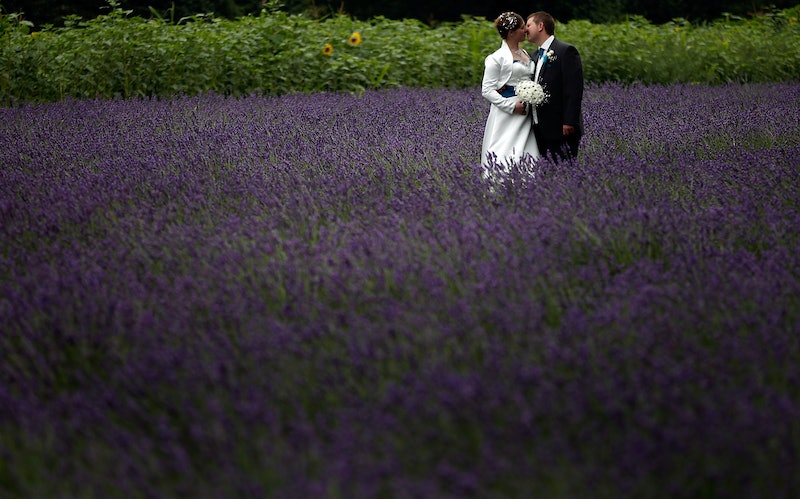 Is the secret to a great marriage understanding that it’s unlikely to happen? That’s what Daniel Teller argues in her recent article for Quartz, “It’s Time to Accept This Fact: A Really Great Marriage Is Rare.” In it, Teller argues that we might be missing a crucial step in making good decisions about relationships in general and whether or not to get married or divorced in particular — and it has something to do with the idea of a “happily ever after” ending most of us grow up learning is the “ideal.” But even though Teller definitely has a point in that this logic can be damaging (the whole article is worth reading, so head on over there to check it out), I feel a little like there’s something… missing. A really great marriage with the “happily ever after” ending we’re taught to covet might be rare; but although acknowledging that fact might help us make better, more informed decisions, I think what might help us make even better decisions is not feeling like we’re committing ourselves to one particular “ending” at all.

There are, Teller says, a couple of options for how we react to married people who don’t feel they’ve gotten their “happily ever after.” Here’s what they are, as well as why we don’t like most of them according to Teller:

Teller believes this last option is what we should say, because hopefully, it will help us make better choices. “People who don’t understand the odds of getting what they want are unlikely to make wise choices. On the other hand, people who believe that success is beyond their reach may also make bad choices,” she writes. So, she continues, “understanding that great marriages exist but are not the most likely outcome” might give us the information we need to choose wisely whether we get married or get divorced, depending on your situation.

Remember that study about people who viewed relationships as a journey, versus as a “soul mate” thing? I keep coming back to it. Viewing love as having found your “soul mate” isn’t quite the same as Teller’s argument, but in some ways, it’s similar: Both imply that once you’ve found your partner, or gotten married, or gotten divorced, that might be the end of the line. Should you choose to end an unhappy marriage and go in search of a new relationship, Teller writes, you might have to “[accept] that you are unlikely to win and may have to say single for the rest of your life” — but why does being single have to be a static state? And why, for that matter, does being in a relationship have to be a static state? You might be single, but being single at one stage of your life isn’t the same as being single at another stage of your life. The same is true of being in a relationship. You always have the power to change your situation. And the details won’t always look the same if you change the light that shines on them in the first place.

If, however, we ditch the idea of “happily ever after,” “unhappily ever after,” and other linear narrative frames, we can start looking at love as a journey. Is “love is a journey” yet another narrative frame? Yes, but it’s a non-linear one, and I think that’s what’s important. Sometimes journeys loop back on themselves, retreading old ground in a new way; sometimes they forge forward into the unknown; and most importantly, they leave the door open to anything and everything — whether or not there’s a destination involved. Journeys often do have endpoints, but they don’t have to have one. You’re not required to journey for the sake of reaching a specific destination. You can journey purely for the sake of journeying.

It’s possible that this journeying idea isn’t useful to someone in the situation Teller first describes — someone who doesn’t feel they’ve gotten a “happily ever after” and is considering whether to stay or go. But if we start reframing our thinking before we even get to that point, maybe it will be easier to deal with if and when we do. As Teller says, our social narratives haven’t caught up to our cultural change yet. Instead of trying to restructure the narrative halfway through, why don’t we start trying to make the cultural change instead?