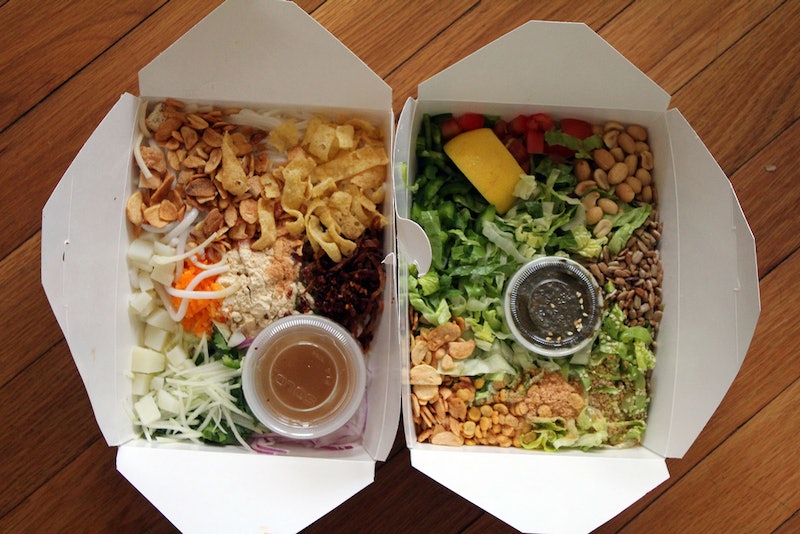 It’s no secret that college students tend to eat a little…shall we say, uniquely. But in case you’ve been curious about exactly how uniquely they do, here are your answers: GrubHub and Spoon University gathered data from orders placed by students at hundreds of schools during the 2013 to 2014 academic year to see just how college students’ food delivery habits compare to those of the rest of the country. The results are a little weird…but then again, these are college students we’re talking about. Just because their ordering habits are "weird" doesn’t mean that they’re unexpected.

For example, orders placed between 10 p.m. and 2 a.m. are twice as common for college students than they are for everyone else; additionally, early morning orders placed between 6 and 9 a.m. are 66 percent less common. This probably has something to do with the fact that those of us in the post-college world can’t usually get away with staying up super late and still be able to function at work the next day. College kids also eat a lot of pizza, fries, wings, soup, and salad, though they’re more likely to chug some Monster than they are to guzzle a cup of coffee. Sorry, Starbucks truck.

Furthermore, the most adventurous eaters predictably come from schools based in huge cities — namely, New York and Chicago. Likewise, it’s no surprise that one of the campuses that orders takeout the earliest in the morning is the Rush University Medical Center; the night shift at most hospitals is a bitch, and by the end of it, all you really want is the comfort of food delivered right to your door before crashing for however many hours of sleep you can manage. What I do find sort of hilarious is that one of the campuses that orders the spiciest foods is Boise State University. I wasn’t aware that Idaho was known for its fiery cuisine, but hey. TIL, right?

My favorite little tidbit? Is the fact that compared to the rest of America, college students order 179 percent more cookies. 179 percent. That’s a lot of cookies. But then, if I lived near a place called Insomnia Cookies, which Business Insider says is one of the highest-rated joints near Michigan State University, I’d probably be consuming a lot of them, too. Because yum.

What accounts for these strange habits? We don’t really know, but it’s probably a lot of things. I’ve got two primary theories:

But hey, just because takeout is readily available 24 hours a day doesn’t mean you have to subsist on it entirely. Between these genius dining hall hacks and these dorm-friendly food choices, you can eat well, eat healthily, and save a few bucks while you’re at it. Check out GrubHub and Spoon University's full infographic below — and bon appetite!

More like this
The Spiritual Meaning Of Angel Number 000, Explained
By Kristine Fellizar
Why TikTok Is Obsessed With Caesar Salads Right Now
By Alexis Morillo
TikTok's Butter Board Might Be The New Cheese Plate
By Emma Carey
Deliveroo Is Selling Lotus Biscoff Cinnabons Now
By Darshita Goyal
Get Even More From Bustle — Sign Up For The Newsletter