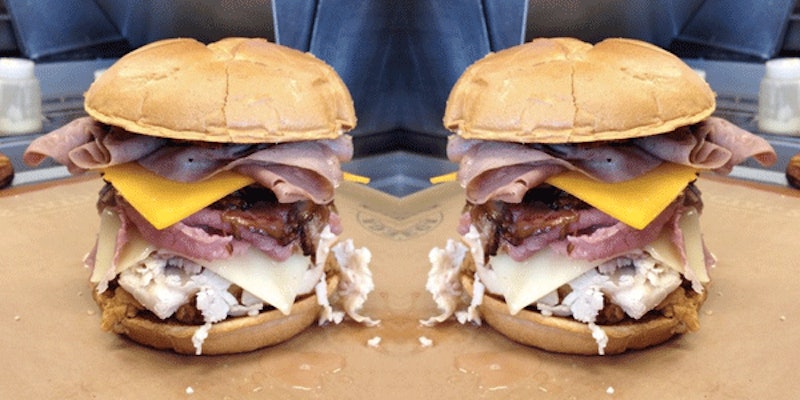 Well, it looks like we’ve got another thing to add to two of our favorite fast food lists: Secret menu items, and fast food monstrosities we can’t believe exist. Frankly, I think this one also deserves a place at the top of a new list: Diabolical creations that herald the end of days. In any event, prepare yourselves, because you’re about to meet the Arby’s Meat Mountain. And yes, it’s exactly what it sounds like.

Strictly speaking, the Meat Mountain isn’t supposed to exist. According to the Washington Post, it was originally just an image on a poster the fast food chain made to remind customers that they sell more than just roast beef (which, by the way, I almost typed as “roast beast.” Not kidding. Dr. Seuss for the win). The poster included every single meat they have on the menu…

And then people started pointing at it and asking, “Can I have that?”

Like all businesses, Arby’s is never one to turn their nose up at a dollar, so they said yes. You can have that. Thus was born the Meat Mountain. It remains off the “official” menu as a secret item, making it a creation only the savviest can order (or, y’know, anyone with an Internet connection after today); if you’re interested, it’ll set you back $10.

Much of the media, including Lindsay Abrams at Salon and C.A. Pinkham at Kitchenette, had the same reaction I did: That is, WHAT IS THIS OMG IT’S GOING TO KILL US ALL. Others, however, took a more logical approach, like Peter Wade at Fast Company. Wade was curious about whether this carnivore’s dream was actually worth the 10 bucks you have to shell out to get it; accordingly, he used Peapod to calculate the cost of the items at a grocery store and compared them to Arby’s price. The breakdown is as follows:

That comes to a grand total of $9.13 — a little cheaper than $10, but not by much. If you’re looking for a deal, fast food aficionados, this one’s pretty good, especially since I’m pretty sure you can get at least three meals out of it.

I have never been to an Arby’s, and I’m probably not going to pick up the habit now. But for those of you who attempt to conquer the Meat Mountain? May the Force be with you. I get the feeling you’re going to need it.