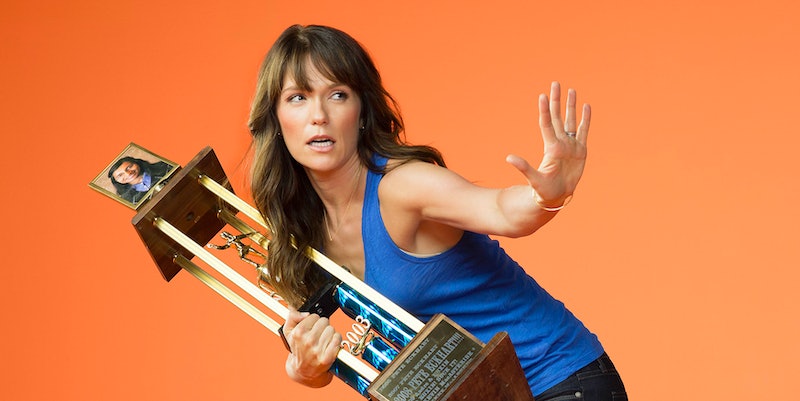 Do you smell that? Yes, it is in fact a Pumpkin Spice Latte brewing at Starbucks. And we all know that Pumpkin Spice Latte season also means football season. Because what's more basic than drinking a #PSL at your fantasy football draft? Nothing, and seriously, there's nothing wrong with that.

It's that glorious time of year when you need to gather your closest football frenemies together, debate for weeks over what night to hold your draft, debate whether it'll be in ESPN or Yahoo, because honestly WTF is NFL Network anyway, and, yes, also debate over what bar to hold it in because someone (see: The Bragger) always wants to rock the boat.

I know you're STILL trying to figure out why Mike hasn't paid you his $100 buy in from last year, but it's time to put last season's missteps behind you. And for the love of god, do NOT draft Michael Vick again this year. We have work to do ladies! So before you head into your draft this season, prepare yourself. Here are the 8 people you're guaranteed to run into in every single fantasy football league...

The I Have A Lot Of Friends So I'm The Commish

The Commish has a ton of friends. Or at least this person thinks he or she does, so they went ahead and started this league. The Commish might not have it all together, but at least someone took the time to go in and set those annoying ass preferences you all just argued about over group text. Surprisingly, The Commish isn't necessarily the best with numbers or even having their shit completely together. But we'll get to The Stat Savant later...

Dude, you seriously just picked the next "best" player that the automated system told you to. Every. single. time. I'm on you.

This person heads into the draft not knowing what they're doing and somehow ends up The Champ because beginner's luck is real. Or they literally just have no concept of football or any luck at all, but want to be part of the group. "What team is Brett Favre on this year? I loved him in the '90s."

The I Finally Won So I'm The Freaking "Champ"

Okay we get that you're The Champ, but you NEED to stop sending this in response to everything in the group text: "Well as the defending champion I think..."

Did you really just run the odds on every single player left on the board in the two minutes between picks? We appreciate that you know everything about the players, but maybe you could win the league at some point this century?

The Woman (or Women) In a Male-Dominated League.

She takes many forms because well, its 2014 and that's what happens. So we've got A) The Woman Who Kicks Ass and Takes Names because she knows what she's doing. The guys don't always understand this but reality check, women are HUGE football fans, too. Or she's B) The Woman Who Happens To Be Dating The Commish. This woman can also kick ass and take names, and it's preferred that she does. Or C) The Woman Who Gets Labelled Simply For Being Female, and plays however she damn well wants to. All women usually need to fight for their spot in male-dominated leagues.

The I Love To Hear Myself Talk Bragger

If this person put half as much effort into their draft as they do into trash talking, they might actually win. But then we wouldn't get to make fun of them, so nevermind.

The One Who Bails Last Minute

UGH. UGH. UGH. Someone call their strangest family member to fill in on Tuesday at 8 p.m.

More like this
How To Politely Reject Someone Who Keeps Asking You Out
By Laken Howard and Lexi Inks
8 Completely Unserious Tips To Make Your Cuffing Season A Success
By Ginny Hogan
10 Ways To Be More Empathetic To Your Partner
By Raven Ishak and Lexi Inks
Think Your Partner Is Cheating? These Tarot Cards May Confirm Your Suspicions
By Kristine Fellizar
Get Even More From Bustle — Sign Up For The Newsletter