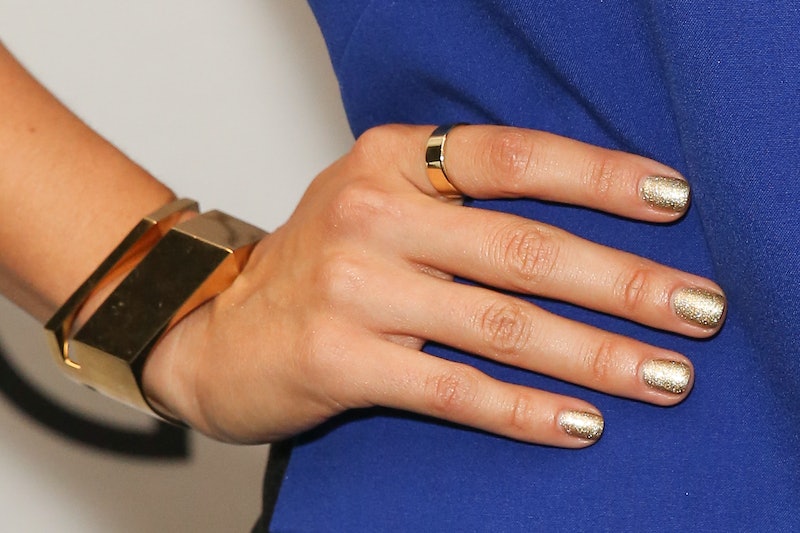 When word hit last week that a nail polish that could detect date rape drugs in drinks by changing color had been created by a team of four undergraduates at North Carolina State University, there seemed to be an immediate and collective response: "Oh, this is awesome!" A nail polish to prevent date rape? Sounds like a cool idea.

But as the novelty faded, many of us took a step back and began to feel a little icky. Something is wrong here. Namely, our rape culture.

Consider the stats: Every two minutes, an American is sexually assaulted; 97 percent of rapists will never see the inside of a jail cell, and in the past three years, sex offenses on American campuses have gone up 50 percent. Clearly, rape is still a major problem, and while products like this nail polish are great in theory, that doesn't address the rape culture so prevalent in our society today.

This nail polish, like the other anti-rape products you’ll see on the list below, are just a quick fix. What they’re forgetting is that it shouldn't be a woman’s responsibility to protect herself from rape; we need to teach men — actually, everyone — not to rape in the first place. That’s where our focus on innovation should be.

But for some reason, people still think it’s easier and wiser (and more profitable) to pour money into products and devices that are meant to protect women from rape, as opposed to putting all that energy, brain power, and funding into programs, education, and maybe even a device that will continually remind people that rape is wrong, if that’s what it takes.

While these devices may be well-meaning, they miss the mark.

The 90-decibel alarm lets everyone know that you’re in the midst of an attack, and is meant to get that potential rapist running. It’s a new twist on the old rape whistle, which, by the way, is still available. I guess this nice set of wings and higher alert volume might be more desirable for some. Oh, and it comes in pink. Women like pink, I've heard.

With just a hit of a button, The Guardian Angel necklace or bracelet will contact your cell phone to make it look like you’re getting a call (a distraction!) and send a text to your emergency contact alerting them of the situation and your exact location. Also, a portion of the proceeds, should you purchase The Guardian Angel, will go to the Association of Women for Action and Research, so at least that’s a good thing.

Created for a high school science project in 2005, a group of Swedish girls came up with the anti-rape belt buckle to keep potential rapists locked out of the wearer’s pants. As the 19-year-old Nadja Björk explained: “You need two hands to open it, so the rapist can't hold you down and open it at the same time. It takes a while to figure it out if you don't know what you're doing." Yikes.

The nail polish, by Undercover Colors, will change color when it comes in contact with Rohypnol, Xanax, and GHB, or similar drugs that fall in the “date rape” bracket. All a woman has to do to detect the drug is dip her finger in her drink and voila! The knowledge of whether or not someone has the intention of date raping you becomes yours in that very instant. Only problem? The nail polish might not work.

With row after row of “jagged teeth,” the South African doctor behind "Rape-aXe" hopes that the condom won’t just stop a rape in-progress, but get the woman justice, too. Although it’s called a condom, it’s hardly that. A woman who chooses this anti-rape method has to keep the device inside her at all times, or at least during situations when she is scared that she will be raped. What does this say about a society if a woman is so fearful of rape that she has to resort to wearing this archaic looking thing preventatively?

The upside to the Rape-aXe condom is that once it locks into a man’s penis, it’s not going anywhere until a doctor professionally removes it, therefore insuring that the rapist will be caught.

From two women in Nyack, N.Y., who only go by Ruth and Yuval (a little suspect, no?), comes AR Wear ("anti-rape" wear) that's made from fabric that can't break, be cut, or ripped off. The only way to remove these garments is to “release the hold by turning a tiny lock to a designated clock position.” The designers were looking for $50,000 in funding last fall, and at this point, have surpassed that amount by $4,000, so I guess this product is underway. Remind you of anything?

Created by three students in India, Society Harnessing Equipment, also known as SHE (get it?), is a line of lingerie that emits electric shock to a would-be rapist, as well as alerts the authorities to the attack through the GPS system in it. Nothing that could go wrong here.

Why, when getting ready to go out at night, do we have to choose between our black lacy getup from La Perla versus our anti-rape lingerie? We shouldn’t have to; we should be able to wear whatever makes us feel good and sexy, and not have to worry about what our chances are for being raped by night's end.

In 2000, a retired anesthetist by the name of Dr. Jaap Haumann in the Free State province of South Africa created what he called the "killer tampon." After speaking with several rape victims, he realized he had to do something, and apparently, that something goes like this:

[The killer tampon is] a hard cylindrical plastic core which contains the spring blade, which slices when pressed against..this plastic core is covered by soft material, the same as a real tampon. This is then inserted by the woman. When the rapist attacks the woman and penetration takes place, the point of his penis will touch the section containing the blade and it (the penis), or at least a part of it, is sliced off."

Well that is certainly a colorful brand of justice, to say the least. An eye for an eye makes the whole world blind much?

When China introduced Hairy Tights as a means to protect its female population from rape, it seemed to be under the bizarre delusion that leg hair is so repulsive that it will keep men away. What the creators of this so-called anti-rape product failed to see, however, is that rape isn't always about sexual desire and, more often than not, is actually about control and power.

They also need some work with their marketing description: "Super sexy, summertime anti-pervert full-leg-of-hair stockings, essential for all young girls going out.” I’m not sure if I could possibly be more annoyed, offended, and disgusted in humanity, and I already feel that way pretty much as it is on a daily basis. Sigh.

We shouldn’t have to resort to these means as ways to avoid being raped, but alas, until society as a whole understands that "No means no," these products will be marketed as a way to solve our rape culture. Of course, they won’t.

More like this
Black Women's Equal Pay Day Highlights An Upsetting Problem
By Brandi Neal
The 19 Best Tweets & Memes About Bisexual Awareness Week
By Lexi Inks
Women Around The World Are Cutting Their Hair In Solidarity With Mahsa Amini
By Darshita Goyal
Breeding Kinks Have Been On The Rise Since Roe V. Wade Got Overturned
By Lexi Inks
Get Even More From Bustle — Sign Up For The Newsletter