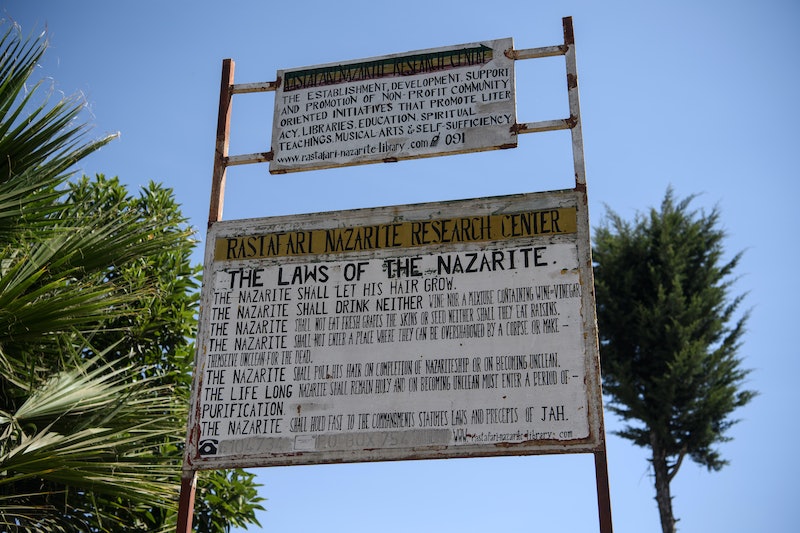 Hoo boy. This one’s a doozy: A Louisiana teen has been sent home from school repeatedly since the start of the 2014-2015 academic year at South Plaquemines High School in Buras, LA because his dreadlocks violate the school dress code. The dress code states that boys’ hair “may not extend lower than the top of a school shirt collar”; neither are they allowed to pin their hair up, put it in a ponytail, or otherwise pull it back. Here’s the problem: The boy’s religious faith is Rastafari, which requires men to refrain from cutting their hair. The dreadlocks are a central tenant to the Rastafari religion — but despite having had this point explained to them multiple times, the school apparently kept sending the kid home anyway.

Luckily, the American Civil Liberties Union of Louisiana is on the case. They published an open letter on August 25 addressed to South Plaquemine’s superintendent, principal, and legal advisor calling for action. Here’s how it went down:

According the ACLU’s letter, the boy, who is identified as John Doe because of his age, returned for the start of the school year on Friday, August 8. He had dreadlocks that extended just beyond the bottom of his shirt collar; upon noticing them, school officials told him he’d have to cut his hair. When he returned to school the following Monday without having cut it, he was sent home. He and his mother spoke with a school board member, who told them the boy could return to school if he pinned his hair up; but when he did that, he was sent home again.

And it gets worse. The mother attended a school board meeting on Monday, August 18 and requested an exemption from the dress code for her son; she also presented Denis Rouselle, the school’s superintendent, with a letter from the 1st Church of Rastafar I on Tuesday, August 19. The letter both confirmed that the boy and his families are members of the church and explained the religious guidelines that require men to grow dreadlocks — but she was told that the letter “wasn’t enough.” And if you didn’t think it could get any worse than that, it did: When the mother asked what information the school board needed to grant a dress code exception, Rouselle reportedly said that he wasn’t a lawyer and left it at that. All told, the poor kid has missed 10 of the first 11 days of school; furthermore, he hasn’t been given written notice of his suspension, which the ACLU argues is “the equivalent of an unlimited suspension.”

This is not OK on so many levels. First off, as the ACLU writes:

“The wearing of dreadlocks for John Doe is akin to the wearing of a religious icon by another student. We would object if the school were to tell a Christian student they could not wear a cross or if it were to permit the wearing of religious icons of one faith and prohibited those of another faith. In discriminating against John Doe’s religious beliefs, the school is expressing a preference for certain religions, which is unacceptable.”

And they’re absolutely right. The problem isn’t too dissimilar from the one we’ve continually run into when discussing the double standards of dress codes for girls: If you’re going to enforce a particular rule, you have to enforce it for all students and concerning everything that might fall under its umbrella. You can’t pick and choose. That means you can’t Photoshop sleeves for girls but let boys run around shirtless; nor can you tell a student of one religion that they can’t wear what they need to as dictated by their beliefs, but allow it for a student of a different religion. And second off, also as the ACLU points out, it’s a violation of both the First and 14th Amendments — freedom of religion and protection of civil and political liberties — as well as of Louisiana’s Preservation of Religious Freedom Act.

According to school principal John Barthelemy, the school board is currently trying to figure out how to proceed (even if it seems like a no-brainer to everyone else); the boy will also be allowed to return to school as long as he pins his hair back until they reach their decision. Said Barthelemy to the Huffington Post, “For the record, this particular student, I have him graduating early, we’re trying to help get him out of school early. The days out of school were not counting against him for suspension or anything on his record, we want to get him back on track.”

Uh… I’m sorry, sir, but how long has it been since you’ve been in school? Do you remember how hard it is to catch up when you’ve missed two or three days, let alone 10? Sure, you’re not telling him, “Too bad, you’ve got an automatic zero for every day you missed!” — but he still lost 10 days, which means he’s fallen behind, regardless as to whether he’s set to graduate early. He’s going to have to work his butt off to catch up because someone didn’t like his hair. You see where the issue is, right?

To be honest, I just don’t understand dress codes restrictions like this one. What’s to be gained by it? How is a boy wearing his hair longer than his collar in any way disruptive to the learning process? I mean, unless he’s, I don’t know, running up to teachers and/or students and literally rubbing his luxurious locks in their faces at every opportunity, or his dreads have become sentient and are proselytizing loudly and of their own accord, I fail to see how it’s a problem.

In their letter, the ACLU cited a precedent, Helaire et al. v. Lafayette Parish et al. from 2001; in it, the school board ended up having to waive dress code rules prohibiting head coverings and “extreme hair styles” to accommodate eight children who followed the Rastifarian religion. With this and all the other ammo they’ve got, hopefully the South Plaquemines school board will grant the kid an exemption on religious grounds. Fingers crossed.