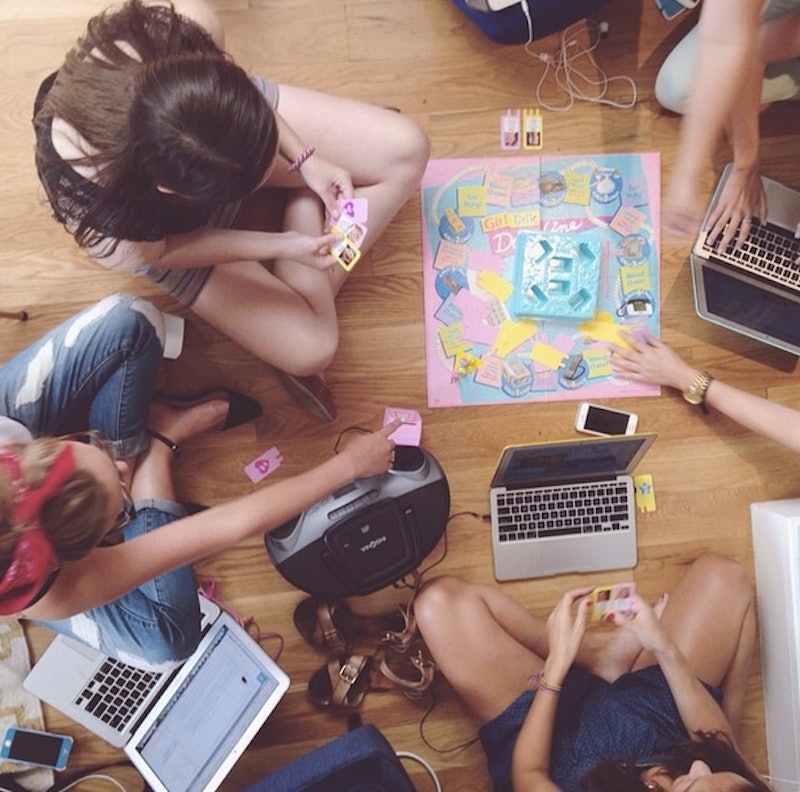 While today's kids entertain themselves with hyper-realistic video games, iPad apps (Kids have iPads. I didn't get a cell phone until sophomore year of college.), ACTUAL robots, and probably their very own Oculus Rift virtual reality simulators that they probably use while sitting on their own personal hovercrafts, we '90s kids had Capture the Flag. And Four Square. And board games.

Before Angry Birds, there was Monopoly, Sorry!, Mall Madness, and in the most perfect incarnation of our fifth-grade selves, Girl Talk: Date Line. For giggling preteen girls who did not yet have boyfriends/boobs/periods/Facebook, this board game seemed like an alluring window into what adulthood (AKA high school) would be like... At least until AOL chat rooms came around and all semblance of innocence was lost (Related: Was 8====D the original emoji?). In the game, each player draws a stack of "teen cards," which are pink for girls (duh) and yellow for boys, and then circles the board trying to successfully make romantic matches with other teens. To see if a couple of teens are going to fall in puppy love, players listen to a tape recording of how an imaginary phone call between these two kids would go down — some of which end in dates for prom, while others end in rejection :(

20 years ago, Girl Talk: Date Line was the stuff that slumber party dreams were made of, but we were curious to see if the game aged well. Would it be the Saved By The Bell of board games (which in retrospect is virtually unwatchable) or would it be the Seinfeld (which in retrospect is even more awesome than we originally remembered)? Would it be face the same fate as Spaghetti-Os (they're actually disgusting!) or Pop-Tarts (still delicious!)? We tracked down the game and played as a group and here's what we found out.

To see if a boy and girl are a romantic match, you slide their cards into a little speaker dock and wait to hear what a phone call between these potential mates would sound like. Except, instead of the dock reading the cards and determining the romantic potential accordingly, you're really just pressing stop and start on a regular cassette tape (how did I not figure this out as a kid? Probably because The Walkman had just come out) so it doesn't matter at all who is matched with who... as long as one card is male and the other is female. Which brings us to...

2. It's (surprise!) not very open minded

Halfway through playing, someone asked who was winning and our social media editor responded with "Uh, heteronormativity." The instructions state over and over that girl cards can only be matched with boy cards, and the phone conversations only take place between boys and girls. Gay people clearly did not exist yet in 1990, it's a fairly recent thing. Doesn't matter if you try to match two boys or two girls together, the phone call recordings are only between one boy and one girl (and hey, what about polyamory?).

Stacie LOVES talking on the phone and hates book reports! Allison hates spiders and scary movies, but she sure loves cheerleading. Gert, who bucks tradition by being into Latin and Algebra, has glasses and dark hair in a sea of Kelly Taylor lookalikes. Of course the girl with the most academic-leaning interests looks the nerdiest.

Apparently women weren't excelling in the STEM fields yet.

4. But, girls can ask boys out

For a game that seems to think that guys belong on the football field while girls belong cheerleading on the sidelines, there are a few phone calls where the girl asks the guy out and, rather than being horrified by her unseemly forwardness, he gladly accepts. Gert should totally ask Homer out, right?

5. You can stop feeling nostalgic for your childhood now

Sure, there's something disturbing about the technological literacy and social media savvy of today's kids (do I sound like a grandmother or what?). There's something distinctly weird about the fact that my 12-year-old cousin has 900 Instagram followers and that there are literally dozens of articles online about how to break your child of their iPad addiction. Comparatively, the idea of little kids bonding in front of a board game rather than in front of a screen seems pretty sweet. BUT, if the games or toys or action figures our younger selves played with were this gendered, they are not to be romanticized too much. We live in the era of Goldiebox and female LEGO minifigs and summer camps that teach girls to use power tools, and that is definitely something to be psyched about.

More like this
12 ’90s Movie References You Missed In 'Do Revenge'
By Radhika Menon
The Spice Girls Just Dropped A Brand New Music Video
By Sam Ramsden
Netflix Reveals First Look At Wednesday In The 'Addams Family' Spinoff Series
By Bustle Editors
She Founded American Girl To “Bring History Alive.” Then She Made Over A Town.
By Amanda FitzSimons
Get Even More From Bustle — Sign Up For The Newsletter