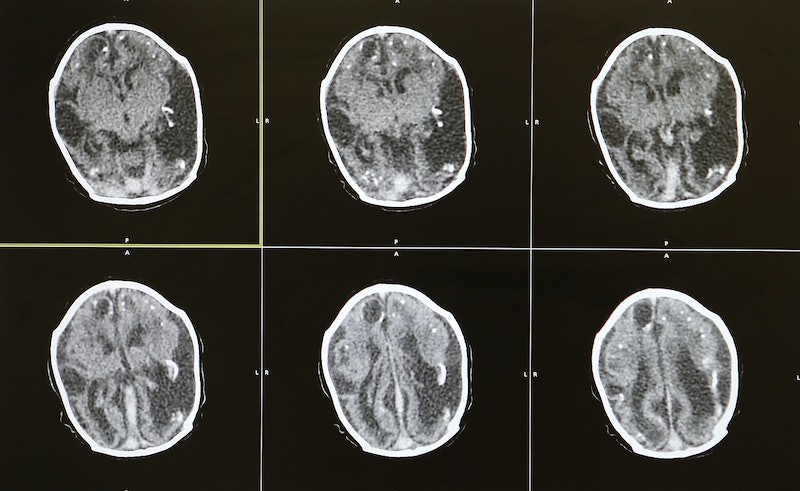 When Eternal Sunshine of the Spotless Mind came out in 2004, it offered us a look at a “what if?” situation many of us often wonder about: What if you could erase your memories? Up until now, memory erasure has mostly been confined to the realm of science fiction — but according to new research, it’s not as far out a concept as you might think. We may not be able to erase memories completely, but it might be possible to turn bad ones into good ones.

Did your mind just blow? Because mine sort of did.

In a study published in the journal Nature, a research team led by Susumu Tonegawa explored how emotions get attached to memories, as well as how those emotions can be manipulated to turn an experience remembered as “bad” to one recalled as “good.” According to TIME, his involved finding where in the brain positive and negative memories are created — something that’s never been done before. Ever. By using a technique they called “optogenetics,” the researchers first tracked emotional memories as they were made in the brains of mice: Administering a specific protein (channelrhodopsin—gibberish to me, but maybe it sounds like something to the scientifically inclined out there) into nerve cells of mice that activated both during and immediately after positive and negative experiences—male mice spending an hour with female mice for the positive ones, and getting a mild foot shock for the negative ones. The protein reacts to a specific wavelength of laser light; when the researchers administered that light to the nerve cells, the mice relived the emotion associated with that experience, even without the experience itself occurring again.

Then they got fancy. The researchers put the mice who had previously gotten shocked in with a female— taking them from the negative experience into the positive one. Then they administered the laser light again, which caused the mice to relive the fear they associated with the shock again. The mice relaxed after about 12 minutes — and the researchers found when they did so that new circuits had grown between the brain’s emotional regions and its memory center. The same thing happened when they put the mice who had previously experienced the positive condition into the negative one. This demonstrates not that one emotional memory replaces the other; rather, it shows that the positive and negative circuits end up having a contest of sorts—and whichever one wins out becomes the emotion linked to a specific memory. Essentially, they hacked the mice’s brains and rewired how they felt about each experience.

But that’s not all. TIME also cites a different study conducted by a group at McLean Hospital that found that the gas xenon can actually neutralize negative emotions associated with bad memories. For this experiment, mice who had experienced foot shocks were exposed to xenon, which prevents the cells involved in recalling memories from making their connections in the amygdala, the emotional center of the brain. Once they were exposed to the gas, the fear behavior in the mice dropped.

I will admit that the first time I read about these two studies, I kind of flipped out — and not in a good way. If Eternal Sunshine and all the other sci-fi stories out there I’ve absorbed over the years have taught me anything, it’s that memory manipulation can very easily go wrong. But an article in the The Atlantic discussing different studies dealing with similar themes zeroes in on how research like this can be used for the powers of good: Namely, treating people suffering from PTSD. Writes Cari Romm, “The idea of reconsolidation broaches new territory for possible relief from PTSD, which affects an estimated 7 to 8 percent of Americans, by addressing its root cause rather than its symptoms.” The ethical quandaries still exist — is it “unnatural” to reshape your memories? But don’t we do that naturally, anyway? Do you lose part of yourself if you get rid of or alter a painful memory? Is it worth the trade? — but for those who both need and want it, research like this could be quite useful, indeed.

In any event, though? The future really is now. Let’s just hope it doesn’t turn into a dystopian one.

More like this
This Psychological Effect Might Be Keeping You From Hitting Your Goals
By Lexi Inks
The 5 Best SLS-Free Toothpastes, According To Dentists
By Amy Biggart and Danielle Calma
The Spiritual Meaning Of Angel Number 666, Explained
By Brittany Beringer
Angel Number 333 Is All About Self-Love & Alignment
By Brittany Beringer and Kristine Fellizar
Get Even More From Bustle — Sign Up For The Newsletter