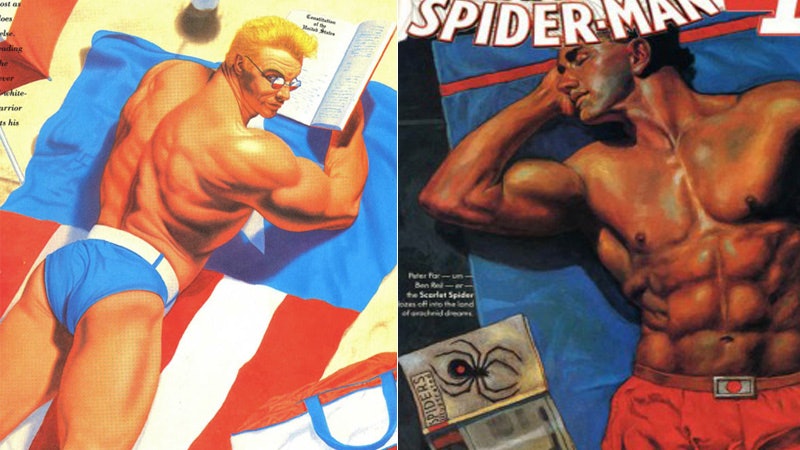 Last week saw the release of a racy variant cover for Marvel Comic’s Spider-Woman #1 — the main focus of which was the heroine’s red-clad backside — which, naturally sparked an Internet backlash. While most fans chose to call out how sexist the cover is, Brett White, a writer for Comic Book Resources, went a step further: He designed a few mock-up covers featuring male superheroes in the same explicit manner their female counterparts so often are.

According to Identities.Mic, White, who's also a co-host of Matt & Brett Love Comics, responded to the controversial Spider Woman cover in his piece for Comic Book Resources: "What If: Male Superheroes Had Their Own Sexy Variant Covers" — complete with full-blown mock-ups featuring absurdly "sexy" depictions of a few familiar superhero faces (with not so familiar skimpy outfits). In the response, White explained to Mic that his major issue with the Spider Woman cover is one of equality, or lack of it. "In pop culture, women are treated as objects. . . . The notion that women only exist to titillate straight men is perpetuated nearly every time you turn on any screen."

Take a look at White's mock-ups (and prepare for abs, so many abs):

Now, this isn’t the first time someone has fought back against sexism in comic book culture via gender role reversal. Earlier this week, BuzzFeed shed light on the issue that women are often falsely accused of being "fake geek girls" with “If Geek Girls Acted Like Geek Guys” by playfully parodying the concept of "fake geek guys."

As far as striving for gender equality for comic book heroines and fans goes, I'm all for it. I hope Marvel Comics takes a cue from White and calms down with the hyper-sexualized female super hero covers. After all, and correct me if I'm wrong, but they're supposed to be solving crime, not twerking!

To view the rest of White's photos, go to Comic Book Resources.