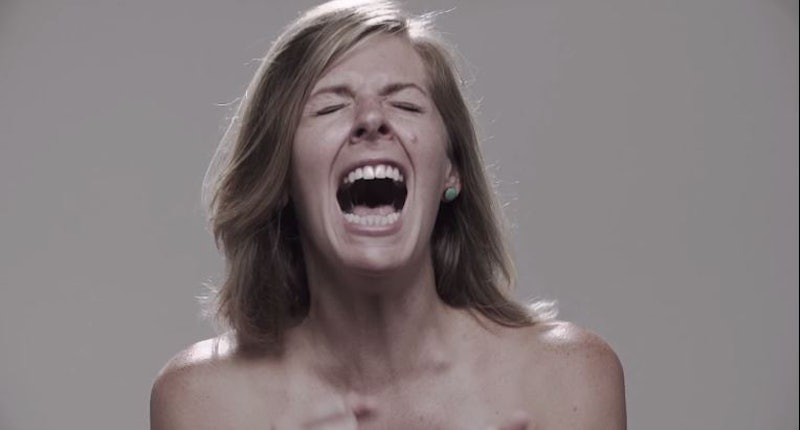 Would you volunteer to have someone use a taser on you the name of art? For me, that would be a “no” — but South Carolina-based photographer Patrick Hall managed to recruit an impressive collection of people willing to get zapped with 300,000 volts. The resulting Taser Photoshoot project sheds a lot of light on how people react to pain, as well as — surprisingly — how people deal with causing pain to someone else.

According to Salon, the project arose from the desire to break out of the posed, fake emotions people posing for portraits often display. Hall elaborated on fstoppers:

That’s where the taser comes in. By sending 300,000 volts through his extremely game volunteers, snapping still photos at the moment the taser hits each of them, and filming the whole thing to boot, he’s managed to capture the incredibly varied amount of ways people react to a huge shock. The photos are available for view on Hall’s website; additionally, he posted not one, but two videos of the Taser Photoshoot on YouTube. The original video, which features only the reactions of those getting tased, is kind of funny in a weird sort of way. I’m sure the epic, movie trailer-esque music contributes to the comedy; that, combined with liberal use of slow-mo and the relatively bizarre premise, come together to create something strangely humorous:

The second video, though, is where things get interesting: An extended version, it features not only the tased, but also the people wielding the tasers. These folks, you see, are the friends and loved ones of those who had volunteered to get tased — and seeing their facial expressions as they approached, voltage in hand reveals a heck of a lot about how they feel about hurting someone they care about. Again, the music choice helps — this time, it’s made up of the forlorn-sounding piano chords that usually score poignant moments of human connection in films — but… well, just watch them:

They’re bracing themselves just as much as the people preparing to receive the shock — and I think they’ve actually got the harder job. You see so much in those looks: Love, apology, a little bit of humor, some pain, and more. Some of them have to close their eyes before they do it; others, in the second following the shock, look like they can’t believe they could have done such a thing. In some ways, it kind of puts me in mind of the Milgram Experiment, but thankfully, minus the whole unethical experimentation on humans thing. Thank goodness everyone went into the Taser Photoshoot knowing exactly what they were signing up for.

Hall also created a behind the scenes video, so if you’re curious about what went into the shoot, check it out here: