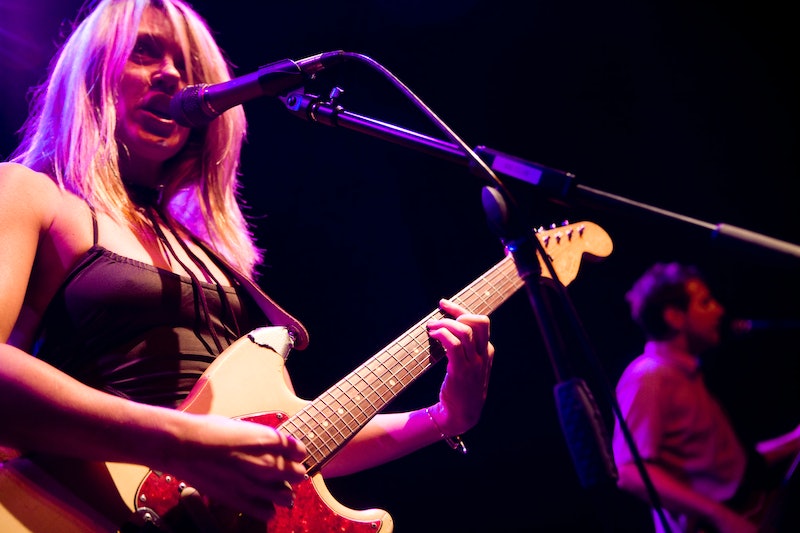 I heard the word "cunt" several times before I knew its meaning. I would sing it in front of my parents, on long car rides up to my grandmother’s house, during brief breaks from NPR. “I only ask because I'm a real cunt in spring / You can rent me by the hour,” I’d sing along, my beloved CD of Liz Phair’s 1993 iconic album, "Exile in Guyville," spinning in the minivan.

I wasn't totally oblivious. I’d skip past certain tracks that had bad words I knew, like "fuck." The song “Flower,” for example, was explicitly about oral sex — even 12 year-old me knew this — and I certainly didn't want my parents hearing it. The year before, some obnoxious kid at summer camp had explained to me, unsolicited, what a blow job was. "You do what to the what?" I'd thought, making sure to say instead, "Duh." After a few minutes of solemn contemplation, I decided there was no way that was a thing, and I continued painting flowers on rocks.

But there was something beautiful about Liz Phair's sexuality, something that extended far beyond the scope of sucking a dick — elements of passion, longing, arousal, desire, grit, vulnerability — yet, at the same time, it was all very much within the context of sucking a dick. This sent me a clear message: It’s perfectly normal to want to be someone’s “blow job queen,” or to want someone "ramming, jamming, slamming" in you. "Flower" empowered me to appreciate and embrace an active mode of female sexuality.

So, at an unusually young age, I learned the following lessons: I can want sex. I can be raunchy. I can see a man…and then I can see him on top of me.

"Flower" was not for car rides. It was for my bedroom.

Every time I see your face I think of things unpure unchaste I want to fuck you like a dog I'll take you home and make you like it.

Of course, all of the sexual subtleties of "Exile in Guyville" didn’t resonate with 12-year-old Maria, who assumed “cunt” meant fairy or something. (Nor could preteen Maria even begin to comprehend the subversive nature of Phair’s ironic usage). But it instilled in me a strong sense of my sexual self that almost-adult Maria cherishes every day. I am a sexual being, full of desire and dirty thoughts and fantasies. Not only is this completely OK — it’s fucking awesome.

The glorious and heart-wrenching track “Fuck and Run” prepared me for the darker side of sex, its emotional dangers (and I'm not talking about God or Mom's disapproval, which has never been a thing for me). Sex can become a mechanism by which we numb pain — a mindless habit, even. Preteen Maria listened to "Fuck and Run" on repeat, over and over, registering the song’s emotional truths, despite not yet knowing what it's like to wake up next to a stranger who gets out of bed and says he has "a lot of work to do," or what it feels like to “fuck and run,” or even fuck (and I wouldn’t know for another seven years, which is a whole other essay.) But I knew what it was to yearn and to want things I felt incapable of having. When I dug deep past the profanities, which was an easy enough task for a 12-year-old who doesn’t necessarily understand them, I arrived at the complicated, uncomfortable emotional truths that hooked me on Liz Phair for life. Because I sure as hell understood this: “I want a boyfriend / I want a boyfriend / I want all that stupid old shit / Like letters and sodas.” I'd seen enough rom-coms to want a boyfriend — an old-fashioned type, too, "the kind of guy who tries to win you over."

To properly learn about sex is to learn about the dissolution of relationships, the push and pull of desire, the radical force of sexual attraction. "Exile in Guyville" prepared me for the experience of being vulnerable, sexually and otherwise, to strangers, and to myself, and it cautioned me against complacency and silence in sexual relationships, as in the sad, sweet ballad, "Canary": "I earn my name/ I come when called/ I jump when you circle the cherry/ I sing like a good canary/ I come when called/ I come, that's all."

No, I'm not going to come when called. I'll come when I come. This has always been true for me, and I give a good amount of credit to Phair, which takes me back to "Flower," the best embodiment of the album's sexual ethos: "You're probably shy and introspective / but that's not part of my objective."

My objective? Sex. Lots of it. With you. The way I want it.