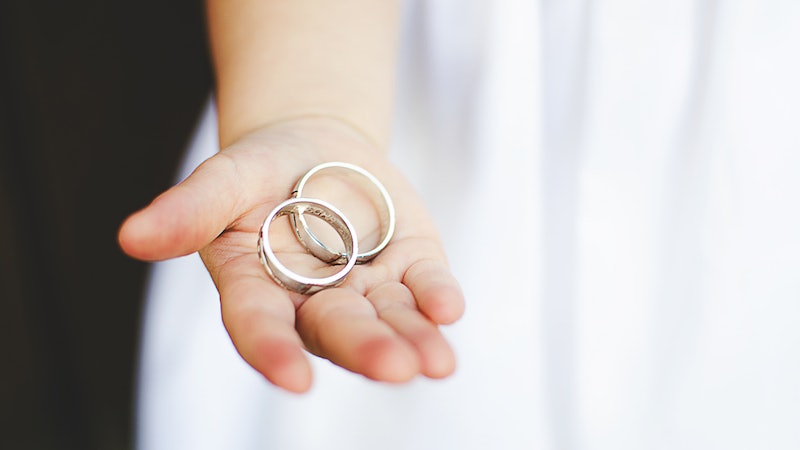 Relationships end; it happens. But when they do, I think we could all stand to take a leaf out of the book of "divorce selfie" couple Keith Hinson and Michelle Knight. Hinson and Knight of Orlando, FL posted a photo of themselves on their social media accounts last week right after they officially dissolved their marriage of three years; they’re both grinning, and the caption Hinson wrote for the photo reads, “We are officially un-married. Here’s to the most friendly, respectful, and loving split imaginable. We smile not because it’s over, but because it happened.” And you know what? I think it’s great. Of course it’s always sad when things don’t work out, but being able to call it quits without bitterness or resentment? That’s no small thing, even though it’s something I think everyone should be able to do.

I’m not a child of divorce; nor have I been divorced myself. But although some are decrying the divorce selfie as a terrible thing — wrote one commenter on the photo’s Instagram page, “Great attitudes, but being divorced shouldn't be something your [sic] happy about. Sounds like you guys weren't too into each other” — it’s not. Wrote Liz Alterman on The Stir, “Not long ago a friend of mine told me she was getting a divorce after more than a decade of marriage. When I told her I was sorry to hear that, she said, ‘Don’t be. I’m thrilled. I’ve wanted this for a while. Trust me, it’s a good thing.’” If divorce is something that’s necessary for the continued good feeling of the people involved, then why can’t it be a happy thing? Being divorce isn’t inherently “bad,” just as being in a relationship isn’t inherently “good.” They just are.

Others, meanwhile, have questioned whether a split like Hinson and Knight’s would be possible if there are children involved. “Although it’s nice to see a polite split, it seems like a false version of divorce,” wrote Emily Arata on Elite Daily. “Hinson and Knight don’t seem to have children, and families with kids don’t necessarily have the luxury of smiling while splitting in half.” This, however, seems like the negativity Hinson and Knight are actively eschewing. I’m not sure exactly what it is about being childless that makes a divorce “false” (is a childless marriage "false?") — but even if they had kids, an amicable split is still a better option than a bitter one. Consider what Alexandra Govere on Ryot wrote in response to those asking, “What about the kids?”, saying that her parent's ugly divorce meant that she and her sister had to pick sides, and that she didn't meet her new stepmother or brother for years.

Govere continued, “I don’t think divorce selfies send a bad message from parents to kids. It’s staying together until you hate each other that sets a poor precedent. It’s parents’ struggles to get along after divorce that makes things even worse.” Truth. Yes, a divorce may be more complicated for a couple with children than for one without — but if you had kids, wouldn’t you rather teach them how to deal with conflict in a respectful way, rather than in a negative or combative one? I sure would.

“Michelle and I have a good sense of humor about this,” said Hinson to the Huffington Post in an email. “And we also wanted to let people know that this didn’t have to be a negative experience. We are choosing to move forward with love.” Their friends and families seem to appreciate that they don't have to choose sides. Ayyyyy-men.

And besides, what Hinson’s caption of the photo — “We smile not because it’s over, but because it happened”—means is that the “divorce selfie” isn’t really about the divorce. It’s about the fact that for a few years, they had something good; it ended, as some things are wont to do, but it ended on good terms. And all that? Is definitely worth celebrating.

More like this
It's A Pleasure #53: Help! My Boyfriend Won't Tell Me Why He Stopped Going Down On Me
By Sophia Benoit
10 Ways To Be More Empathetic To Your Partner
By Raven Ishak and Lexi Inks
The Differences Between Kinks & Fetishes, Explained
By Lexi Inks
8 Signs Your In-Laws Might Be Toxic
By Kat Kuehl
Get Even More From Bustle — Sign Up For The Newsletter