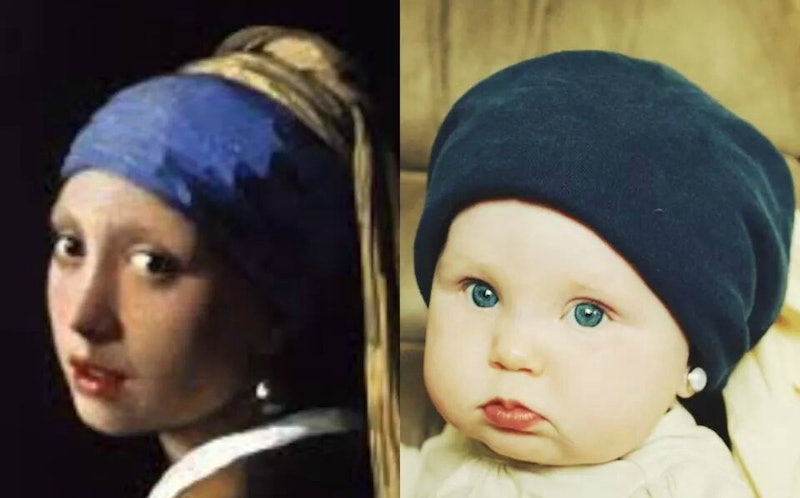 Not a fan of fine art? Here’s something that might convert you: Famous paintings reenacted with babies. Or rather, with one baby in particular. The images are adorable, even if the kid’s parents are going to have some explaining to do when she grows up a little and discovers she was Internet famous in her infancy. At least all babies look more or less the same, right?

These hilarious creations come to us by way of redditor taythrash, who recently posted the photos to the content sharing community via Imgur. According to the r/Pics thread from whence they came, one of taythrush’s friends posed her daughter in such a way as to resemble a few famous paintings; and hey, once you’ve snapped photos like these, what else are you going to do with them but share them with the Internet?

So far, taythrush’s pal has only done three paintings. Even if you’re not a devotee of fine art, odds are you’ve got at least a few works of art squirreled away in your brain; whether you absorbed them by osmosis or actually are an art historian, though, you’ll probably be able to identify them fairly easily. They cover a pretty wide swath of art history, ranging from Johannes Vermeer’s Girl With a Pearl Earring:

(Side note: Who knew that Jesus was such a fan of the sippy cup?)

And finishing up with Gustav Klimt’s Baby 1917:

Confession: I had to perform some pretty involved Google-fu to identify the Klimt painting. I recognized it, but I couldn’t come up with the name or artist off the top of the head; I guess that’s what I get for never actively studying art history. Learn from my mistakes, kids.

Reenacting famous images with kids has long been one of the Internet’s favorite pastimes, of course, with the results ranging from the supremely silly to the outright inspiring. On the silly end of things, we have the 2014 Best Picture Oscar nominees as performed by a bunch of wee ones:

And on the inspiring end, we have photographer Jaime Moore’s “Not Just a Girl” series, in which her daughter Emma took on the mantles of such real life women as Amelia Earhart, Jane Goodall, and Coco Chanel:

Here’s hoping taythrush’s buddy comes up with a few more as time goes on — and introduces the little girl to WTF Renaissance when she’s old enough. She's going to love it.