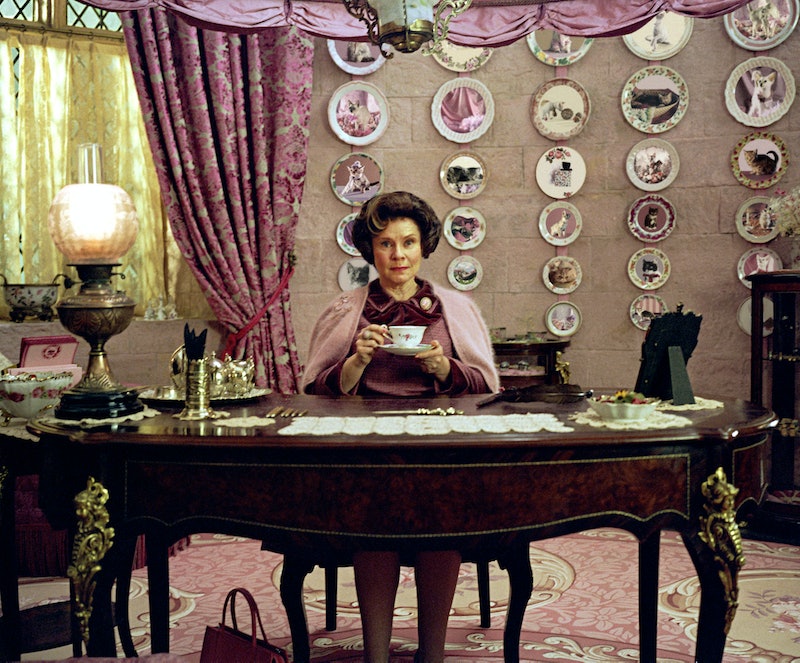 Waiting to find out who your roommate will be is like waiting to find out the results of your arranged marriage. Granted, a roommate is more of a short-term commitment — maybe — but we're talking about someone who will wake up with you, go to bed with you, spend late nights studying with you, and hopefully not murder you in your sleep. Woe to the well-meaning, tidy, cheerful girl who gets stuck with the passive-aggressive roommate, the psycho roommate, the hoarder roommate, the socially-awkward-to-the-point-of-fainting-every-time-she-talks roommate, the ultra-popular roommate who kicks you out of your room at all hours of the day or night, or the roommate who looks and talks and acts perfectly normal, but who frequently wakes up in the middle of the night and watches you.

Most classic literature doesn't involve anything that looks like a dorm room, and that's probably a good thing, because literature is dotted with utter psychos and awful backstabbers and after living with them for a few weeks, you'd be begging your parents to let you come home and work for Dad's investment firm like he always wanted. In short: There are plenty of ways to lose the roommate lottery. Here are 17 more.

Holden Caufield from The Catcher in the Rye

Holden Caulfield hates everything, and that includes you. And the dorm beds. And the school in general. You walk into your tiny shared room on the first day of school and he's just like, "Ugh." You ask him what he thought of the new student orientation, and he responds, “You never saw so many phonies in all your life." Cool attitude, bro.

Before you even enter the room, Josie's already spread a million terrible rumors about you to the other girls. She's an expert backstabber and she doesn't like the way you do your hair, or your aura of confidence, or the fact that people already like you better. She's taking up two-thirds of the closet space.

Mary from Little House on the Prairie

At first you're pretty sure you've hit the roommate jackpot. Look at this peaceful, kind, blonde girl who keeps all her things so wonderfully organized! She doesn't have a mean thing to say about anybody. After a few weeks living together, though, you realize that Mary's morality is a cover-up for a bad case of OCD, and if she looks "reproachfully" at you one more time because she can faintly hear your music through your headphones, you're going to scream.

The narrator of The Tell-Tale Heart

Your mom almost passes out when she walks into the room with you and sees this crazed-looking dude sitting on your bed. When you ask him if he's OK, he responds, "Nervous — very, very dreadfully nervous I had been and am; but why will you say that I am mad?" When you ask why he's nervous — and what in the world that awful thumping sound beneath the beige carpet is — he starts crying and pointing to his overloaded class schedule, as your mom creeps out of the room to demand a single.

You signed up for a triple, and one of your new roommates is dreamy — buff, clean-cut, and dressed in head-to-toe Armani. But when you notice Roommate No. 3 wrapped in plastic under his bed, you decide to take that gap year, after all.

It's unclear why you're rooming with a professor (what is wrong with this college?), but there's something so sinister about her plump face. You notice that the entire dorm room is done up in shades of pink, and, even worse, "a collection of ornamental plates, each decorated with a large technicolor kitten wearing a different bow around its neck." You're like, "I thought we discussed decor already?" and she just smiles at you like a toad.

You're just trying to have a good time during your first weekend away from home and this dude is moping on the bed because he thought he'd signed up for a room at the local junior high school. Buzzkill.

You can smell the mustiness of your room from all the way down the hall. Groaning and cursing inwardly — a pipe must have broken somewhere and gotten all the carpets damp, right? — you're shocked to discover that your room is coated in cobwebs and dust. It takes you a few minutes to make out the figure laying on the bed like a corpse, dressed in yellowed lace. She sits up and extends a bony hand your way. When you ask her what she's most excited about for college, she croaks, "To finally meet another boy."

Jay Gatsby from The Great Gatsby

After a few blissful weeks living in the most popular dorm room on campus — your new roommate throws the most ridiculous parties and has one of the best fake IDs you've ever seen — you start realizing that the best things in life aren't all champagne and can-can dancers. Your roomie never does anything. He won't take out the trash, he has no idea what his class schedule is, and he spends all day mooning over this basic girl in Pi Phi who's already started dating a football player.

Bertie Wooster from Jeeves and Wooster

You're a scholarship kid, but your roommate is from an extremely wealthy family and — get this — used to have a butler. While you wake up at 7 a.m. to get to your work-study job, he's complaining about the fact that he doesn't know how to tie his expensive shoes. When he starts asking you to fix him a hangover cure every morning, you request that he be transferred to Patrick Bateman's room.

Eowyn from The Lord of the Rings

OK, so the dorm rooms are tiny, and the bars over the windows are a little stifling, but this girl will not stop raving about how she feels like she's in a "cage." She's obsessed with getting a room in the guys dorm, because she claims it's better over there. You're pretty sure this is her first time away from home.

You're going to lose it with this chick and her new boyfriend. She won't bring him over, but you're pretty sure he's been coming through the window at night. Oh, and they're already talking about getting married. If you see them gazing into each other's eyes on the quad one more time, so help you . . .

Cathy from East of Eden and Bellatrix Lestrange from Harry Potter

After requesting a transfer from The Tell-Tale Heart room, you're stoked to find out that you've been given a triple with two cool older sophomores. You don't understand why the other freshmen are giving you such pitying looks — they seem nice! — and a few months later, when you, too, have become a hardened sociopath, you're beyond caring.

This guy has a one-track mind and it's driving you crazy. He doesn't care about dining room hours, or getting good grades, or who's hot and who's not. You're pretty sure he only enrolled in this university to defeat his high school chess rival, who he claims "totally goes here."

She burned down your dorm room on your first night in college and definitely doesn't brush her hair.

You feel awful for disliking your sickly, miserable roommate, because she is having a really hard time of it at college, and keeps having to sell her clothes on eBay to make tuition payments. But she does it all with such a purified-by-suffering attitude that sometimes you wanna be like, "Here's a pumpkin spice latte, please stop singing."

The Artful Dodger from Oliver Twist

Your new roommate is funny, confident, and hilariously insistent upon seeing himself as a victim of the university system, despite the fact that he's failing all his classes. You guys had a great time together, until he got expelled for theft. It wasn't until he moved out that you realized he'd taken half your things with him.