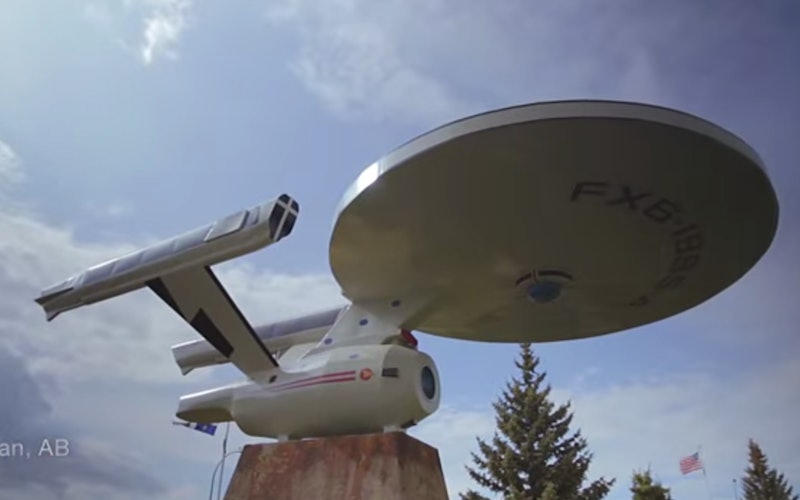 If you are a die-hard Star Trek fan, there is one place you need to move immediately: the town of Vulcan, Canada. But it's not just the name that means you need to move there — it's also the fact that this tiny town is currently trying to raise money to build a real, fully-functional USS Enterprise. Space, the Final Frontier, here we come!

Vulcan, a town of about 2,000 people located in the province of Alberta, is already known as the "Star Trek capital of Canada." They host an annual celebration called "Spock Days," which in the past has attracted Star Trek actors, including Leonard Nimoy himself. But apparently, this is not enough for the devoted fans of Vulcan, Canada. No, they are now trying to build their very own Star Ship Enterprise — to the tune of 2 trillion dollars.

Sounds reasonable, especially since the Enterprise would not be complete without a warp drive, a type of technology which has not been invented yet.

Still, the people of Vulcan, Canada are generally in support of the idea — some have offered to lend the developers their existing blueprints. And the project is already off to a strong start with over 2,000 dollars in donations pledged on its Indiegogo page. Though, since the total goal is 2 trillion, that's still only 0.0000001 percent of the goal, but it's a strong start! Of course, the project is also being funded on Indiegogo's "Fixed Funding" deadline, so none of the money will actually go to the project managers unless the total amount is raised. Which seems...unlikely.

But still, we could have an Enterprise, guys! Get behind this, will you?

You can contribute to the fun here.

More like this
5 Ways To Help People Impacted By Hurricane Ian In Cuba & Florida
By Emma Carey
The Real Reason Your Instagram Story Viewers Show Up In That Order
By Emma Carey
How To Turn Off Night Mode On Your iPhone Camera
By Emma Carey
Behind The Hilarity Of The "POV: You Walk Into My Room" TikTok Trend
By Lexi Inks
Get Even More From Bustle — Sign Up For The Newsletter