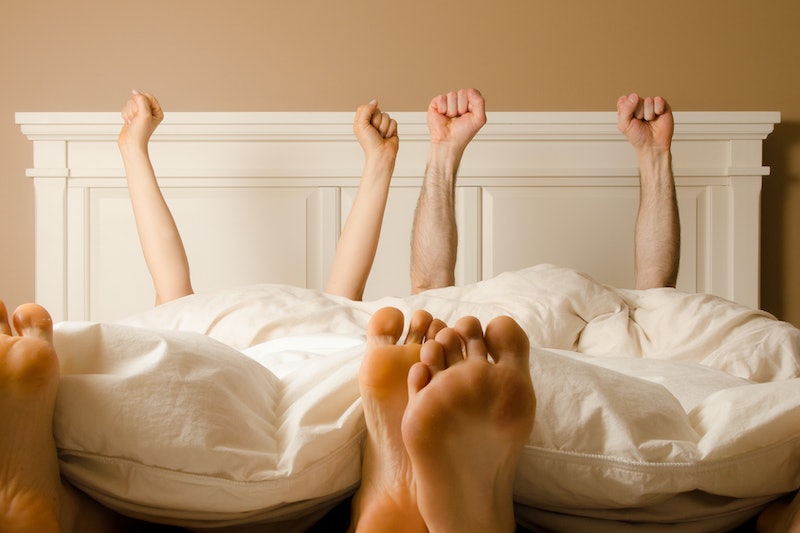 Silly me. I thought my boyfriend would be excited when I announced that we would be having sex to 15-20 musically variegated songs over the course of a few days for an assignment.

"This is the dream, you know," I reminded him, not for the first time, before running through the premise of the project. We were going to figure out the best musical genre for tapping that, I explained. Since we never really have sex to music, I figured we would make excellent guinea pigs. And besides, I had already volunteered us.

He exhaled slowly. We've been having a lot of sex for what I refer to as "my craft" (writing) lately.

"I mean, maybe the dream isn't this exact scenario," I conceded. "Like, maybe not this specific situation of having sex to several different types of music, and then it's documented on the Internet. But having a lot of vaguely adventurous sex — that's the dream. And we can even listen to Taylor Swift if you want," I lied.

Skip ahead one see-through nightgown and an enthusiastic morning romp later, and he was seeing things my way. (Thanks, babe; you're a trooper.) Thus, the great boning-to-music experiment of fall 2014 commenced! I even used the scientific method...

To determine the the best genre of music to bang to. How far I've come since AP Biology!

A widely circulated, if dubiously sourced, factoid: jazz listeners have much more sex than pop music lovers, and classical fans hardly get laid at all. Combatting this is a more legitimate-seeming study, in which participants claimed "greater self-reported sexual arousal in response to classical music." There's clearly room for further investigation in this research field.

Other findings about music, sex, and mood: derogatory lyrics coax teens to DO IT, listening to aggressive stuff makes dudes feel aggressive, and listening to violent/misogynist stuff makes dudes feel violent/misogynist. (There is much ado about rap music. Anyone else detecting a whiff of systemic racism?) Finally, in 2012, Spotify's listeners were frequently found copulating to these 20 tracks, one of which is the Star Wars theme.

I propose that, of the six genres I'm testing, the best for sexual relations will be... classical! Hear me out: it has varied tempos, built-in crescendos (amirite ladies?), and shouldn't be too distracting. And my boyfriend has his money on jazz.

My boyfriend and I are the only two participants in this study, standing in for the rest of 20-something mankind. I realize this sounds unscientific, especially because music is such a personal thing. Look at it this way, though: we have polar opposite tastes, so it's sort of like we're a much larger sample size.

Because we're only human, we limited our experiment to six genres of music: pop, classical, rap, jazz, EDM, and rock. If some of our jazz seems blues-y and some of our pop seems R&B-y, forgive us; we left our soundtracks in the hands of Pandora radio.

Potential confounding variables: positions used, time of day, mood, and general horniness... oh, and the fact that we're defining entire genres of music by two or three songs. Sorry, friends — I am willing to endure much for science/attention, but not chafing. Never chafing.

In lieu of a post-coital cig, my boyfriend and I romantically shared post-coital observations about the content and quality of our slam session.

Length of tryst: 4.5 minutes. It was a pre-work quickie, be nice.

Notable notes: "0 to 100" in particular created a good rhythm for cowgirl action.

Did it sexy things up? "Not... noticeably?" asserted my boyfriend, as we raced out the door. Both offered a kick of energy and stable rhythm for us to move to. Maybe the rhythm was too stable, actually — a more varied beat in either track could have inspired more interesting sexual acrobatics. (Blame Drake for ALL your boring sex!)

Notable notes: "Beethoven's 5 Secrets," FYI, is a mashup of Beethoven compositions and OneRepublic's "Secrets." It's weird and distracting and I do not recommend for intercourse.

Did it sexy things up? The music influenced our tempo and intensity: think deep strokes, lots of clitoral contact, and a real sense of buildup. The first two compositions had the nice perk of clearing my mind and helping me to be more in the moment. Overall, classical is great for long, slow sex with someone you connect with — not for a bodice-rippin' casual fling.

Notable notes: What is pop, anyway? Like Christina vs. Britney? I typed "pop" into Pandora and it directed me to the Today's Hits Radio station, so that's what we went with.

Did it sexy things up? Nooooo. The songs were so distracting! "Problem" is especially terrible for foreplay; I broke character like five times to dance goofily. We both groaned when Pharrell came on, and not in a good way. Verdict: NOPE.

Notable notes: We cheated a little bit with this one — we were already fooling around before I remembered we should probably turn on some music. All work and no play, etc, etc.

Did it sexy things up? We picked EDM as a joke, but it turns out we totally underestimated it. The tracks had a liberating effect: all that head thrashing, losing yourself in the beat, waiting for the bass to drop stuff translates really well in bed. We cycled through a few positions, including a new and superb one (we've been dating for years; this is a big deal). Worth the weird looks it may earn you at the onset.

Notable notes: Multiples were involved. That is all.

Did it sexy things up? Rock isn't as beat-driven as some of the other genres we listened to, but a good guitar riff and an oddly high-pitched male voice can really set the mood. During the '80s jams, I kind of felt like I was banging in Top Gun. It's cheesy in a good way. Also, did you read the part about multiples? Multiples!

Notable notes: We did not go into this one in a good mood. For a pick-me-up, I turned on jazz ahead of time, figuring that it might have magical sexy healing powers. It kinda worked, until we got started...

Did it sexy things up? ...aaand suddenly, all of Miles's and Duke's hard work was for naught. Maybe it was our grumpiness, maybe it was the music, but either way, this jazz wasn't feeling sultry at all. In fact, it had a distinctly elevator-music vibe. It got so bad that my boyfriend asked me to turn it down.

Here are the two things that shocked us the most:

Other notables were classical, which we both really enjoyed, and pop, which neither of us managed to keep a straight face through. In general, tracks with strong beats and smooth but varied musicality performed best for us, while songs with discernible lyrics, familiar tunes, and jarring notes were too distracting.

Also, while we obviously wound up having sex to the rhythm of most of the songs we were listening to, I was much more affected by the music's emotional impact than its physiological effects; certainly, that was my primary focus when it came time to discuss and review each genre. Honestly, I'm generally pretty self-possessed in bed, but once or twice during the experiment, a song upped my sexual confidence so significantly that I felt like high-fiving myself afterward.

I'll be honest: going into the experiment, neither of us thought a soundtrack would make sex significantly sexier. As my boyfriend puts it, "Our sex is pretty great, and we don't usually have music on. Why fix what isn't broken?" And, I have to admit, I'm looking forward to being unchained from melody (get it?) for our regular routine.