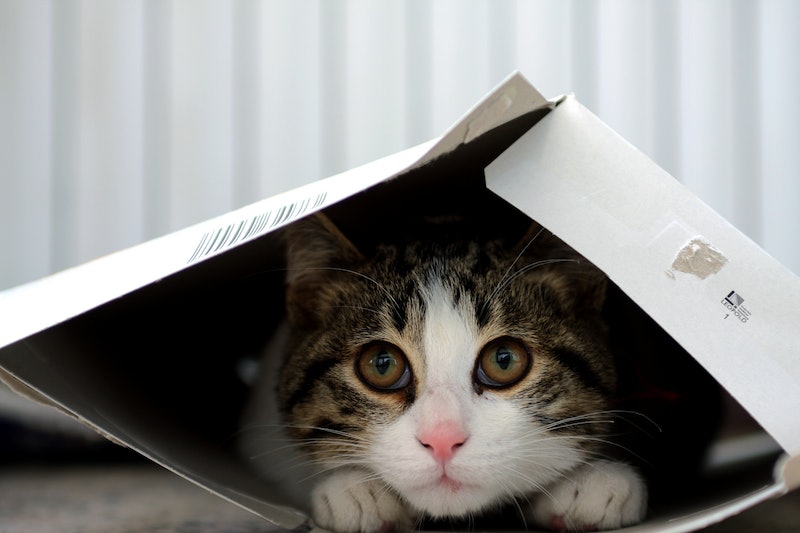 Unless you've been living under a rock, by which I mean "don't have creepy Google Alerts set for any and all sex-related topics" (such is the life of a sex blogger), you've heard all about/darkly obsessed over forthcoming WE TV show Sex Box. What's that, you say? You're a normal person with normal Google Alerts and haven't heard much about this? Oh.

Well, normies, Sex Box is a British-born show coming to American televisions vis-a-vis WE TV in 2015. Each episode goes a little something like this: A couple steps into a soundproofed opaque box (which, as you'll come to see, is actually the size of a studio apartment in Manhattan). They proceed to totally do it in said box. Immediately post-coitus, the lovebirds discuss their sex lives with a panel of experts. Did I mention that they're in front of a live studio audience the whole time? What could possibly go wrong?!

The idea, I guess, is to convince couples to open up while sex is fresh in their minds and their guards are down. Even with its gimmicky execution, it's a valid idea — who doesn't want to be better at communicating with their partner, in and out of bed?

My sex life happens to be pretty golden these days, but as with all things, there's always room for improvement. And it's certainly not unhealthy for a couple to set aside time to unpack issues and work on developing relationship intimacy. With all this in mind, my boyfriend and I crawled into a UPS box over the weekend. Welcome to "Sex Box," DIY edition!

Step one: have sex... in a box. Step two: discuss feelings directly after. Because I put my friends through too much already, we decided that, in lieu of recruiting a panel of experts, we would just grill each other instead.

One obliging, indulgent, and willing significant other

One blanket to throw over the box, if, unfortunately, you aren't even sure where to BUY a really big box, and therefore have to cram yourselves into a rather petite cube, Maru-style, but still want to evoke the more intimate environs depicted on the hit television series Sex Box

Two lists of questions, one per participant

Here's the thing: Because my boyfriend and I share a teensy New York apartment together — we're talking bedroom-lofted over-the-kitchen-and-accessed-with-a-ladder small — it definitely would have been more geometrically accurate for us to just bang in our apartment as per le usual. So why the box at all? Well, to my line of reasoning, the whole point of the experiment was to have sex in a space that was intimate, but also not quite in our usual comfort zone.

So crawl into the box we did...

Although we were really only having sex in the box for a minute. Cardboard, as it turns out, rips really quickly when there's rigorous activity involved.

And, uh, having sex on a slab of cardboard under a blanket was... not great. Like, I don't even think my boyfriend will be mad if I tell you that we were both pretty eager to get the whole thing over and done with, given the sheer physical discomfort and the grating scrape of cardboard on floor and the threat of asphyxiation by blanket and all.

Having sex in a box with a blanket over your head for vague sensory deprivation: it's not all it's cracked up to be!

After a quick roll in the recyclables, we decamped to our couch. Prior to having sex, each of us had written out a list of questions for the other about our sex life; we pulled them out for discussion now. Some of the queries were taken from the one episode of Sex Box we had actually watched — "What would you say is the best sex we've ever had?" and "How do you define good sex?" among them — while others were of our own making, like "How much do you masturbate when I'm not home?" and "What are you most self-conscious about in regards to sex?"

I'll be honest — I didn't expect to get much out of this. My boyfriend and I have been dating for awhile, and we're pretty open with each other. One of my favorite things to do is pepper him with a long string of questions riiiiight when he's dozing off to sleep. But! I was actually pleasantly surprised as we ran through our questions together.

Even though we will periodically ask each other random questions about sex, it's been a long time since we've sat down and really checked in on the subject. Our Q&A touched on some genuine anxieties, curiosities, and desires that we hadn't articulated in awhile, and there were even one or two bits of new information that arose.

I'm not saying that at-home "Sex Box" was a relationship-changing experience; I wasn't blown away with crazy new knowledge of my boyfriend's boudoir likes and dislikes. But I will say that it was really, really nice to have a frank, confident dialogue about turn-ons we don't get enough of, experiences we want to start looking into, and moments from our sexual history that we'd like to recreate.

Did we need to have sex in a box to have that conversation? No. Did it provide us with an excellent excuse to do so? Indeed, it did.

That said, when asked, "What is the best sex we've ever had?" my boyfriend did not reply, "Two seconds ago with you on a janky strip of flattened packaging supply. WOW!" Which is to say, bonding it may be, but red-hot it's not. For the latter, may I recommend an ice-scapade or a grapefruit beej?