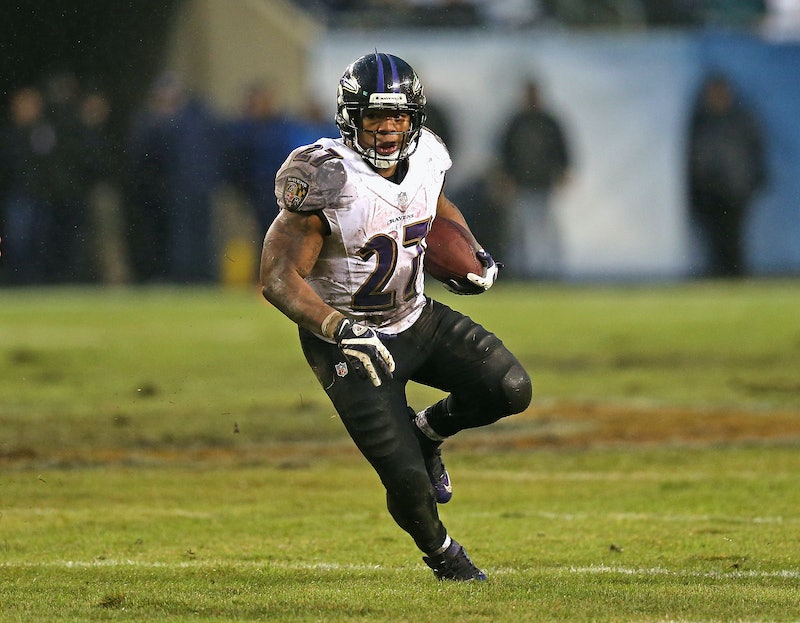 After TMZ released the full video footage of former Baltimore Ravens player Ray Rice viciously beating his then-fiancé/now-wife Janay, the entire media world erupted about what this new footage means — What it means for Ray Rice’s career. What it means for NFL officials who claimed that they hadn’t seen the video before handing down a two-game slap on the wrist after Rice was arrested for the assault earlier this year. What it says about our attitudes toward domestic violence.

And sure, we’ve talked about how horrible it must be for Janay Rice to be married to Ray Rice, and we’re all sorry for the pain that she’s endured. Beyond a few platitudes and well wishes, though, the broader conversation in mainstream media has not been particularly substantive. Most importantly, we’ve not considered what the wide-release of this footage means for future victims of domestic violence, particularly those who are most at risk.

What is different about Ray Rice is that unlike the thousands of violent, abusive partners that lurk in our schools, neighborhoods, and workplaces, his actions were caught on tape. The vast majority of the time, domestic violence is hidden behind closed doors. We whisper about it, but often we do not intervene. Victims go to great lengths to create cover stories for their abusers and hide the pain that they inflict, largely because of the shame that is associated with interpersonal violence.

There are some who would argue that publicizing this kind of abject violence is a positive step to ending it, especially in light of the National Football League’s decision to indefinitely suspend Rice from playing the game. Unfortunately, though, whatever gains in pursuit of “ending domestic violence” came from the release of this tape, they were made at the expense of Janay Rice, a victim.

When TMZ made the decision to publish this footage, it is clear that nobody there gave a damn about what it would mean for Janay Rice. As if being beaten, then forced to apologize for her “role” in her husband’s rampage wasn’t bad enough, now millions of people have free reign to cast judgment on Rice. As Dave Zirin wrote at The Nation, “if Janay Rice wanted to show this tape to the world, in other words if she had offered her consent, that is a different matter. But showing and reshowing it just because we can is an act of harm.”

There is no doubt in my mind that this is an excruciating time for Janay Rice, complicated by the fact that she is married to and has a child with Ray Rice. If they have somehow (and I can’t imagine how) moved past this horrific incident, she deserves her privacy as a victim. Some would shame Janay Rice for going back to her husband, but it is all too common. On average, a woman in an abusive relationship will try to leave her partner seven times before finally cutting ties.

If Janay Rice is trying to move on with her life, a 24-hour news cycle full of pundits making jokes and pontificating about whether or not she had it coming isn’t going to speed along the process. Worse, it could have put her at greater risk both in terms of abuse from her partner and from the outside world.

Which is why this kind of footage is so problematic in the context of domestic abuse. There is already a serious shame and stigma surrounding the reporting of domestic violence, evidenced by the fact that only 20 percent of physical abuse by an intimate partner is ever reported to police. But making abuse public doesn’t keep abusers from hurting people, and opening victims up to the hateful trolls and hordes of people who would blame them without their consent can be irreparably damaging.

“With YouTube and TMZ and all the rest, victim blaming extends far past simply being shunned by your immediate community — it means having your most horrific memories go viral without your consent, writes Hannah Giorgis at The Guardian. “It means having millions of people virtually dissect your wounds, not to heal them but to decide if your injuries were bad enough for everyone to feel bad for you.

Outside of the fundamental truth that it is unacceptable to be violent or manipulative with your partner, there is no way to neatly define a pattern of behavior for either abusers or victim. When you do try to codify “good” and “bad” behavior for victims, it inevitably means that only some will be worth fighting for. Whether or not you “agree” with her decisions following the assault, Janay Rice still deserves dignity.

So do the millions of people who are abused by their partners and loved ones every year. Prominent cases like these are known for setting precedents, and the NFL’s decision to suspend Ray Rice only after seeing the video sets a dangerous one. Victims of domestic abuse already face near-insurmountable obstacles in both reporting the crime and pursuing justice, and the added burden of photo or video documentation for a conviction is scary.

TMZ probably wouldn’t care about footage of a non-famous woman being beaten by her non-famous husband, but that doesn’t mean that video footage of these victims couldn’t get disseminated out through Facebook and Twitter to their friends, families, and employers. Or worse, their children. The potential for harming victims by releasing these videos is great, and there is really no concrete evidence that abusers would view the video as a "teachable moment."