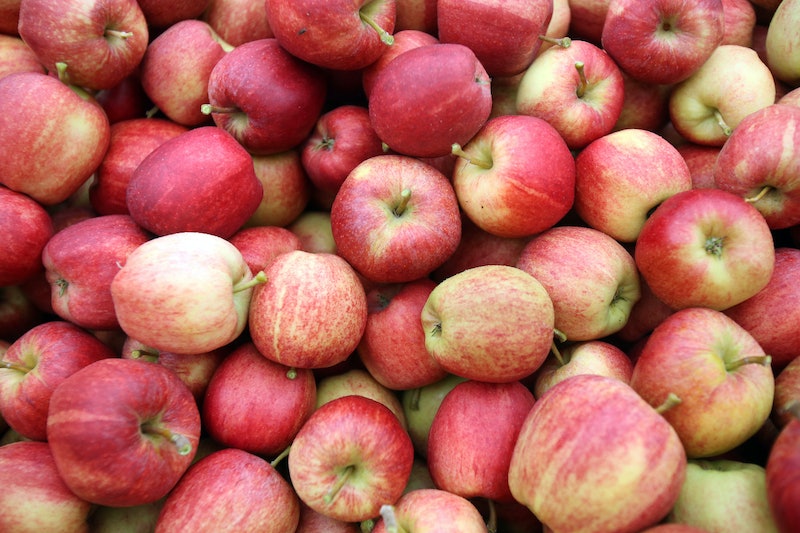 No item of produce is nearer and dearer to Americans’ hearts than the apple. Sometimes red, occasionally yellow, at best green (Granny Smith fan here), apples bring to mind American folklore (Mr. Appleseed), childhood treats (apple cider, apple pie), unsanitary party games (has anyone ever bobbed successfully?), and what is most assuredly America’s favorite season — fall. It follows suit, then, that if there’s a produce-related activity that wins out over others, it’s apple picking. The Laura Ingalls Wilder inside you waits all year for her day in the sun, and apple season is her moment to break out, blue gingham dress flapping, swinging wicker basket in hand.

If you’re itching to go picking, you’re in luck: The pomaceous fruit, as it’s technically known, is in bloom. But where’s the best place to go?

If you live in New York and take the subway, expect government-issued travel ads to soon tell you, sparing no sumptuous photographs or Helvetican admonitions, “not far.” And they’re right: Many of the country’s apples come from American Northeast, on farms in states such as as New York, New Jersey, and Connecticut.

But the apple is no New England snob, and orchards can also be found along the mid-Atlantic, across the Midwest, and as far as Washington State, where, as it happens, half the country’s favorite fruit comes from. Here, we list 10 of the best places to pick your own:

Stribling Orchard is a renowned farm located near the Shenandoah River in Virginia, and its history squares well with the state’s colonial roots. The main house on the property was built in the mid 1700s, and apple trees began being planted not long after. Today, the orchard offers a wide variety of pre-picked and PYO (pick your own apples), as well as other goods, such as honey from its own beehives. While you’re picnicking on the grounds — as guests are encouraged to do — look out for a member of the Stribling family, which has owned the land since 1819.

Some of the country’s best apple orchards are located in North Carolina. The most dramatic of these is Flat Rock’s Sky Top, which, as its name suggests, is situated on one the area’s highest peaks, at 2,900 feet. Enjoy a variety of PYO apples and the orchard’s collection of farm animals — all while taking in a 10-mile panoramic view.

Artisanal hard ciders and a two-story tree house set this property apart in a state that boasts some 7,400 acres of orchard land. The orchard offers several dozen types of apples, with a helpful online table identifying early, mid, and late season picks.

Johnson Orchards is located in Yakima county, an “oasis for apple cultivation” in a state that serves up more than 50 percent of America’s apples each year. With a history dating back 100 years (it was established not long after the area got its first railroad stop), the orchard offers, in addition to Gala, Ginger Gold, and Honey Crisp apples, an array of peaches, apricots, plums, and other fruits. Their pies aren’t bad either.

With a name that sounds like a character from Harry Potter, Deardorff is a family-owned farm that caters to both kids and adults. Come for the apple picking, tractor rides, and “friendly” farm animals; stay for the tastings at the property’s own Parley Lake Winery.

Alyson’s Orchard in Walpole, New Hampshire boast more than 50 acres of land bearing 50 varieties of apples (and you thought knowing Fuji made you an expert). Guests can pick their own or shop from the farm stand, which also sells jams, syrups, and other goods. And if you’re really into apples, you can even get married there.

Kiyokawa Family Orchards is located in Oregon’s Hood Valley, “where the nation’s finest apples and pears are grown,” according to its website. The orchard has been in operation since 1951 (it was established by Mamoru Kiyokawa, a former WWII internment camp prisoner). In addition to stunning views of Mt. Hood and affordable, “grower-direct” prices, the orchard offers a detailed online ripeness calendar — so that, if you’re a picky picker, you’ll know exactly when to go.

Apple picking is predominantly a kid-friendly activity, and, as far as adult entertainment goes, it can lack a certain punch. Bear Swamp Orchard in Ashfield, Massachusetts addresses this by offering, in addition to a range of PYO and farmstand apples, an enticing collection of craft hard ciders. The tasting room is open Fridays and weekends beginning Sept. 19. (Didn’t know you’d need a DD to go apple picking, didja?)

Bear Swamp will also appeal to the eco-conscious. The owners, Steve Gougeon and Jen Williams, avoid all pesticides, even organic-friendly ones, and they leave the grass unmowed, creating an ultra-back-to-land atmosphere. Here’s how they introduce their “Who We Are” page: “Reality is no longer a liberal concept but is the exclusive domain of the radical fringe.”

Several pleasures can be combined in a single visit to this Connecticut farm. Apple picking, tractor riding, and animal petting all await at Silverman’s, which has been in operation since the 1920s. Afterward, you can take a drive to get in some excellent leaf-peeping — Connecticut has some of the best. Then, finish off the day with a visit to the Long Island Sound shore, in nearby Bridgeport. Apple pie on the beach: a new American tradition?

Its name may sound like the title of a children’s book, but Dr. Davies Farm — a 35-acre spread located only 30 minutes from the George Washington Bridge — is 100 percent real. Founded in 1891 but Dr. Lucy Virginia Davies, the orchard offers some 4,000 apples trees, as well as an on-site pumpkin patch, just to make everything extra-fall.