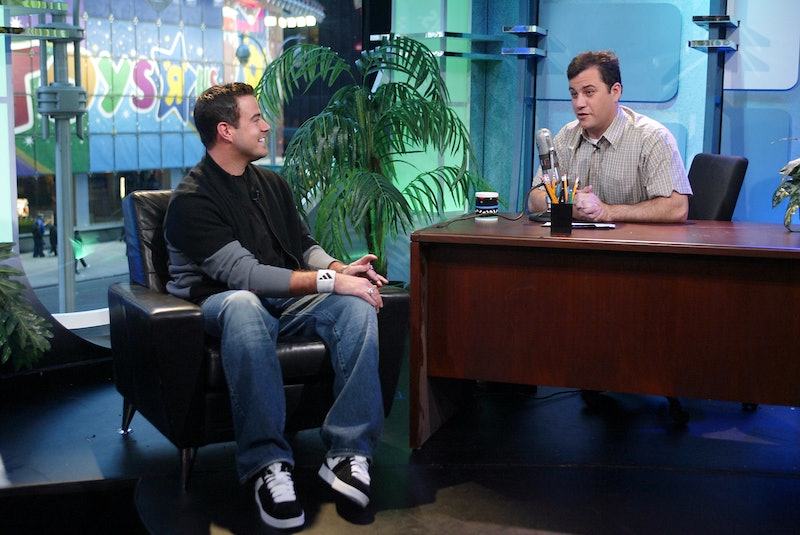 Two late night faces are heading to primetime in a pretty major way. The Hollywood Reporter states that popular late night television host Jimmy Kimmel has sold a pilot to ABC. He's set to produce it alongside his friend of many years, Carson Daly, in addition to experienced producer Dan Fogelman (The Neighbors).

The show will be loosely based on Daly's career, which should be a nice throwback for anyone who grew up watching him on TRL (raise your hands, folks). The as-yet-untitled half-hour sitcom will be about a VJ whose career takes a nosedive, which means he has to do the unfathomable: move back in with his folks and serve as the host of a mediocre radio show. Cringe! Gone is the glamour of interviewing frosty-tipped pop stars and midriff-baring teen queens! Present are the woes of living in mom's basement! Nooo!

In actuality, Daly's career turned out more than all right — he's now the host of his own NBC late-late-late night show for all of you night owls out there — but there was undoubtedly a slight downturn after those beautiful TRL days (my, have things changed since then — and my, have we all aged).

But the really cool thing here (besides your opportunity to witness a show that celebrates the glory days of music videos) is that this is a huge milestone in Kimmel's career. THR points out that plenty of late night hosts produce sitcoms, but few actually write them. Kimmel's got legit writing chops, and it will be awesome to hear his funny quips during primetime hours. And Daly? Welcome back to the popular conscience of those who don't stay up into the wee hours of the night. We've missed ya, man.

More like this
This 'One Tree Hill' Wardrobe Error Is Going Viral On TikTok
By Brad Witter
Keyla Monterroso Mejia Is Finally The Star Of The Show
By Gabrielle Bondi
Pamela Anderson's Sons Brandon & Dylan Have Their Own Hollywood Careers
By Arya Roshanian
Ashton Kutcher Wants Danny Masterson “To Be Found Innocent” In Rape Retrial
By Jake Viswanath
Get Even More From Bustle — Sign Up For The Newsletter
From hair trends to relationship advice, our daily newsletter has everything you need to sound like a person who’s on TikTok, even if you aren’t.