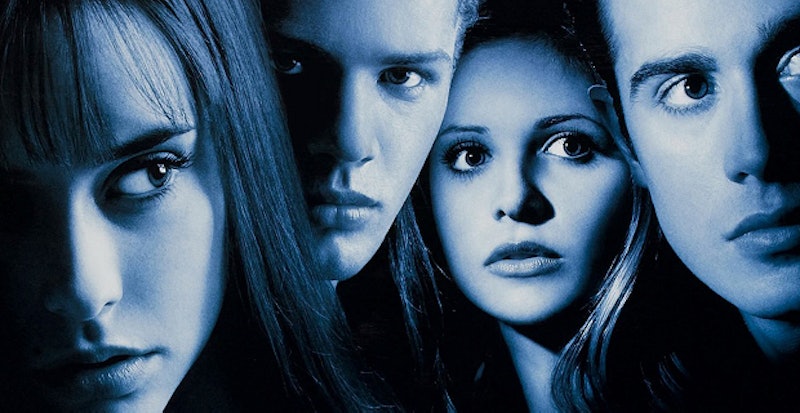 More like, I Know What You Did 17 Summers Ago. Deadline reports that Sony is rebooting the slasher flick from your childhood, I Know What You Did Last Summer. You are probably old enough to remember when that movie was in theaters. You are definitely old enough to remember the onslaught of Freddie Prinze Jr. pin-ups that came with the movie's success. Evidently, the real horror of this reboot is how rapidly we're all aging.

Our impending mortality aside, this new version of the movie is going back to the original source, the 1974 Lois Duncan novel. It will be penned by Oculus scribe Mike Flanagan alongside Jeff Howard. Sony is thinking along the lines of Oculus for this reboot: a tiny budget, with the potential to yield big results. (Oculus was filmed on a tiny budget, and it managed to rake in $40 million. Dolla-dolla bills, y'all.). Worried that the spirit of the original flick won't be sustained? One of the original movie's producers, Neal Moritz, is going to be producing this redux. Moritz is also responsible for the Fast And The Furious franchise, so as far as we know, this revamp could be I Know What You Did Last Summer While You Were So Fast And Furious — in other words, overwrought with bombastic car chase scenes.

But the real issue here is not only the obvious #toosoon trend that could emerge, but the fact that there were some moments in the original movie that can never be recreated. The late '90s were a glorious time, so glorious, that we shouldn't try to recreate them. Much like when you're running from a fish-hooked killer, you remember, but you don't look back and try to do it again.

Because even if the producers were to pull a Rent and invite the original cast back, it just wouldn't be the same story. After all, Freddie Prinze Jr. is now a silver fox — and while one could always argue that his character could have prematurely grayed, that might invite some cognitive dissonance. After all, there are just some components to the original movie that can never be repeated, like these:

A wise woman named Cher once sang, "If I could turn back time... then I would find away... to make Freddie Prinze Jr. return to his twenties when his career was in its heyday!" OK, maybe she didn't sing that exactly, but it was close.

I have this clear memory of watching this movie with my friend. I was so distraught when the beautiful Ryan Phillippe suffered his tragic ending. (Sorry — that's a spoiler, but it's been 17 years. You should know by now!) In fact, I was so overcome by emotions that I started crying out, "MY HUSBAND!!" Yup.

The Birth of Freddie and SMG's Romance

One of the best parts of watching this movie is watching one of the sweetest Hollywood couples begin their romance. Further, even though this movie was critically panned, it is actually a historical relic.

If we learned anything from the Saved By The Bell movie, wasn't it "don't try to recreate the '90s?"

It Was During The Scream Years

This movie emerged when the cinematic scene was rife with slasher flicks, including the more satirical Scream. The market sort of begged for more additions to that genre. Right now? Not so much.

Because at the end of every slasher flick is the dawn of a new beginning, and this beginning had everything to do with the one and only Brandy. "The Boy Is Mine" singer was bound to star in the impossibly worse sequel, I Still Know What You Did Last Summer. That said, if this revamp is an excuse for a Brandy revival, then I'm totally in.

More like this
Hilary Duff Is “Optimistic” About A 'Lizzie McGuire' Reboot
By Alyssa Lapid
12 Years Ago, Austin Butler Manifested His Oscar Nom In This Disney Movie Scene
By Jake Viswanath
Rupert Grint Just Shared A *Major* Update About Ron Weasley’s Future
By El Hunt
The OG Power Rangers Are Returning For A Spandex-Clad Special
By El Hunt
Get Even More From Bustle — Sign Up For The Newsletter
From hair trends to relationship advice, our daily newsletter has everything you need to sound like a person who’s on TikTok, even if you aren’t.