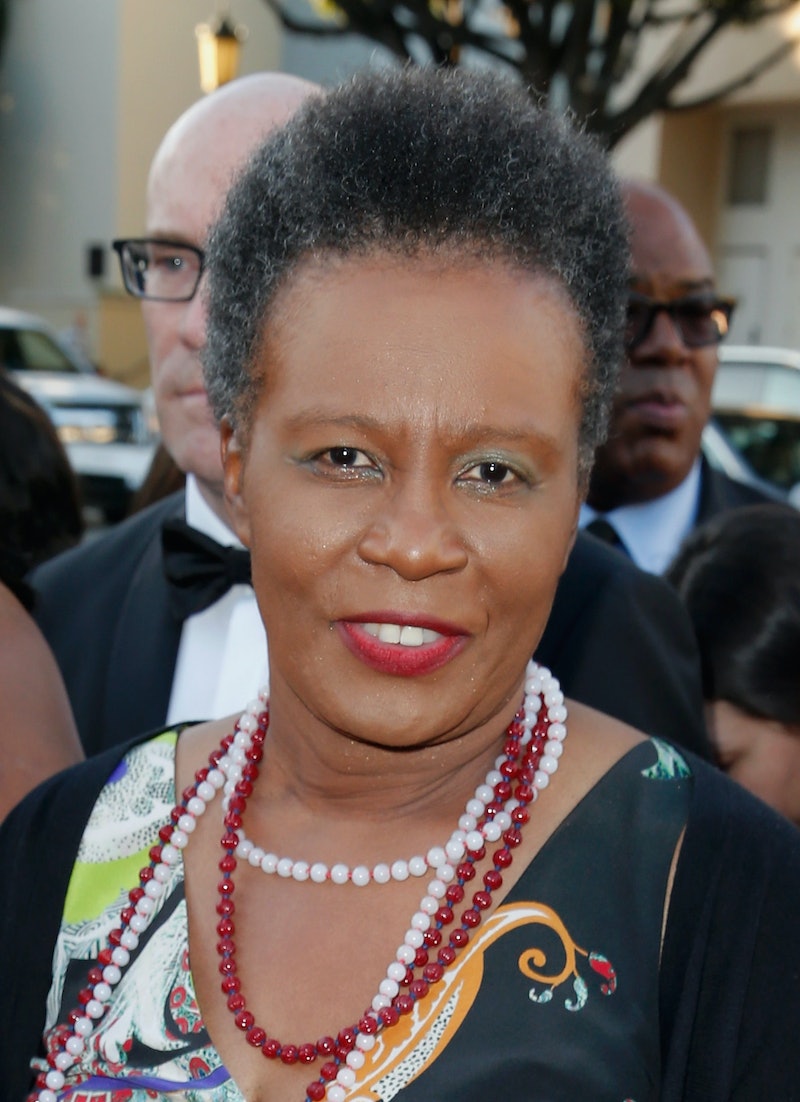 It's National Book Awards longlist season, friends: Following the announcement of the young people's lit list on Monday, Tuesday brought us the National Book Award 2014 Longlist for Poetry. One common theme about the names on the list: it mainly celebrates well-established writers. On it you’ll find heavy-hitters like Louise Glück, Mark Strand, and Fanny Howe — all of whom have been publishing for years and have 10 or 20 books to their names, respectively.

I'm most excited about Claudia Rankine’s Citizen: An American Lyric (that's her above), due to be released October 7, which is a follow-up to her book from 2004 Don’t Let Me Be Lonely, a series of short essays or prose poems that deal with turmoil, political and personal; medicating depression; issues of race; and our relationship to culture as filtered through the TV screen. It’s smart and straightforward writing — the kind of powerfully affecting book that even devotees of nonfiction can appreciate.

· Spencer Reece, The Road to Emmaus(Farrar, Straus and Giroux)

Although the longlist acknowledges some excellent books, it's a little... expected. If it were longer, I'd pop these four incredible, lesser-known books from 2014 onto it, too — they're the kind of titles that will make you drop everything and read them in one sitting:

The New Testament by Jericho Brown

“We breathe until we don’t. / Every last word is contagious.” —from "Another Elegy"

The Earth Avails by Mark Wunderlich

Mark Wunderlich’s gorgeous and lyrical third collection of poetry centers on ritual and prayer. These poems are in love with language but stay controlled, precise and devastating. Many of the titles come from the poet’s translation of a book of prayer in German, with wonderfully specific titles like “Heaven-Letters,” “Prayer in a Time of Sickness,” “A Husband’s Prayer.” There’s an incredible tension created when a nonreligious poet writes poems of devotion. The speaker’s voice is lovely and quiet, even in describing violence. In “Raccoon in a Trap”, I’m still not over the surprise of the last lines.

“The sun returns for another run / pulled by the beasts of myth // before I put the muzzle of the gun through the wires / and fill his warm head with lead.” —from "Raccoon in a Trap"

If the Tabloids Are True What Are You? by Matthea Harvey

Matthea Harvey is one of the most playful and strange poets writing today; she loves mermaids and robots and objects in miniature. Her latest book is a fantastic art object, combining her mermaid silhouettes, embroidered images, photographs of little figures and things encased in ice. They aren’t precious though, which is the major achievement of her subjects. Poet Craig Morgan Teicher describes her better than I ever could: “Harvey is a genius of the unusual, and of the dark underbelly of the adorable.”

"The straightforward mermaid starts every sentence with “Look . . . ” This comes from being raised in a sea full of hooks. She wants to get points 1, 2, and 3 across, doesn’t want to disappear like a river into the ocean. " —from "The Straightfoward Mermaid"

The best thing about Ellen Bass is that she somehow gets away with similes and metaphors that shouldn’t work but somehow they do. Example: a poem from one of her previous collections called “God and the G-Spot.” Her latest collection, Like a Beggar, is her best one yet, gentle and intelligent. She touches on youth and aging, what happens to the body, and how a long love endures.

"So here’s the view, the breeze, the pulse/ in your throat. Your wallet will be stolen, you’ll get fat, / slip on the bathroom tiles of a foreign hotel / and crack your hip. You’ll be lonely. / Oh taste how sweet and tart / the red juice is, how the tiny seeds / crunch between your teeth." —from "Relax"

PLUS: Dorothea Lasky has a new book of poems coming out this September titled Rome and I cannot wait! In the mean time, if you like deceptively simple language about large, complicated ideas pick up her previous collections Black Life and Thunderbird. With titles like “I Hate Irony” and “I Like Weird Ass Hippies,” she is a total pleasure to read, making you laugh and then suddenly stunning you with something profoundly true.