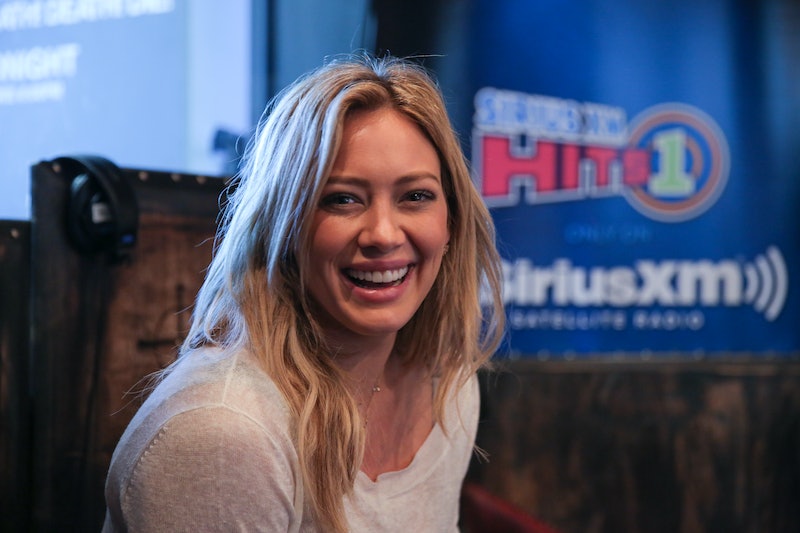 Hilary Duff is just like us all: she has a thing for Harry Styles. Okay, maybe she's different in that her thing for Harry Styles is strictly musical, but still — just like The Jewish Chronicle, he is on her list...of people with whom she wants to make music! (ICYMI: The Jewish Chronicle listed Styles as an A-plus Jew. He's not Jewish.) In fact, Duff told MTV News that she wants to record a duet with him! That's a pop music match made in heaven. She said:

I might go with an unknown or an up-and-comer just to give the song even more of a quirky feel [..] But secretly, I really love Harry Styles but he’s kind of busy with One Direction — I know this — but I am a secret 1D fan.

You and the rest of the girls and their begrudging dads, Hil.

But perhaps more significantly, this means that Duff's new album is closer to surfacing! It sounds like she's maturing from the girl that she was "so yesterday" — er, so a decade ago — as she describes this potential Styles duet as:

[An] old school Sheryl Crow vibe to it [...] It’s about being in New York and meeting someone, like, standing in the rain trying to get a cab, when you’re basically going to fight for a cab and you’re either going to join forces or you’re going to fight to the death [...] Well, this one is about not getting in a fight and sharing a cab with a guy and like falling in love on the ride.

A few things of note: Duff and I have a lot in common (we both like female singers who topped the charts in the 90's) and Duff also is unlike any New Yorker that I've ever met. What kind of New Yorker shares a cab with a stranger? An insanely optimistic sunshiny one, that's who — or, come to think of it, one who is sharing a cab with Harry Styles. Ah, now it all makes sense!

More like this
Harry Styles Just Split His Pants In Jennifer Aniston’s Face
By Sam Ramsden
Will Beyoncé Perform At Or Attend The 2023 Grammys?
By Jake Viswanath
Taylor Swift May Miss The 2023 Grammys For Reasons Fans Know “All Too Well”
By Jake Viswanath
Taylor Lautner Thought Taylor Swift's 2009 VMAs Interruption Was A "Skit"
By Alyssa Lapid
Get Even More From Bustle — Sign Up For The Newsletter
From hair trends to relationship advice, our daily newsletter has everything you need to sound like a person who’s on TikTok, even if you aren’t.