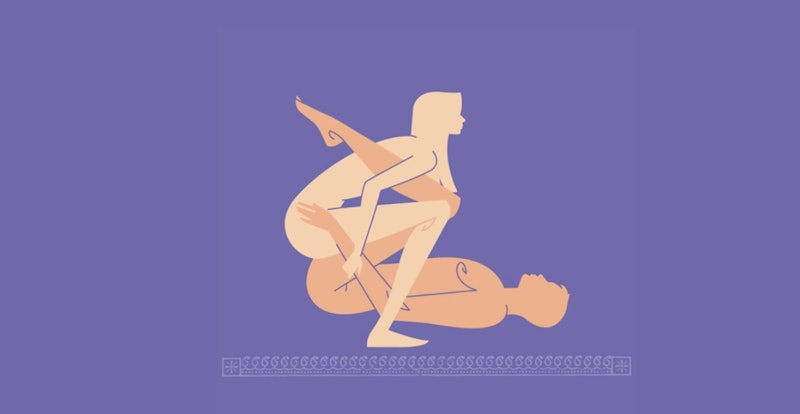 Like most Manhattanites, I have a pretty love-hate relationship with my city. (You can get Thai food pretty much whenever or wherever you want, but drugstore shampoo costs about $15. Honestly?) But one of my favorite things about the concrete jungle is this: I could hobble outside on one rollerblade and one stiletto with toothpaste running down my face and a fur cape flung over my shoulders, and there's still a pretty good chance that I wouldn't be the weirdest thing passersby saw on the street that day.

And that, my friends, is because of stunts such as the one below, where a couple sheathed in fleshy body suits took to the mean streets of Columbus Circle — OK, not really, there's a Whole Foods there and everything — to enact a bunch of vaguely preposterous Cosmo positions. Oh, and it's produced by Cosmo itself.

I'm gonna need you to clap for two things here: first, for the brave heroes who put on a show at the very fountain where I first learned about New York's it's-technically-legal-for-women-to-go-topless-in-public law when a woman let the girls out over one of my lunch breaks a few years ago. (Again, you are NEVER THE WEIRDEST THING HAPPENING IN NEW YORK.)

Second, I think Cosmo deserves a round of applause for a sporting sense of humor about the nature of its brand. It's been a running theme since magazine genius Joanna Coles became editor-in-chief of the title two years ago, and I trust that it will continue as long as she's at the helm. It's nice to have a mainstream-media reminder that sex is often funny and messy and, occasionally, disastrous. We just can't be sexy all of the time, OK?! We just can't.

On a related note, I may totally cop this look for Halloween this year.