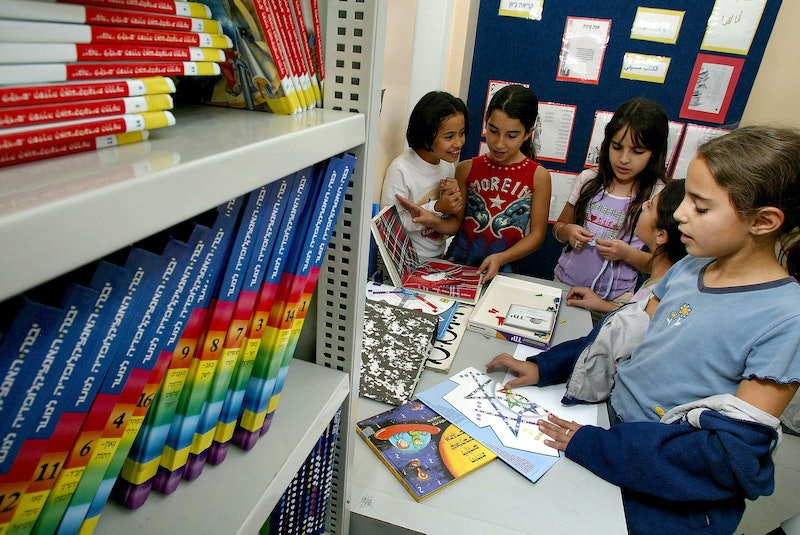 This year marks the 32nd annual Banned Books Week, a national event sponsored by the American Library Association celebrating the right to read and have access to information. The ALA's Office of Intellectual Freedom, which oversees Banned Books Week, has been collecting information on book bans and challenges for over 20 years, which means they have some pretty comprehensive lists of controversial books from the 1990s and early 2000s. With all this Banned Books Week excitement in the air, I took a moment to peruse these lists, and had a somewhat surprising revelation — while there were plenty of "WTF, seriously?" books on the lists, there were a handful that actually... kind of... made sense.

*Waits for deluxe Harry Potter box set to come flying at her head.*

Let me explain. I'm all for freedom of speech, unrestricted access to information, and opportunities for the human mind to challenge itself with complex and yes, sometimes discomforting, concepts. I don't think books that are about or include references to human sexuality, foul language, religion, racial themes, violence, or other allegedly "offensive" topics are harbingers of the downfall of civilization. I recognize that many of the books on the frequently challenged lists are some of the best in the English language because they tackle difficult and sensitive issues.

However, let's not ignore the other side of the argument — not all books are appropriate for all audiences, particularly young audiences. Do I think children should be exposed to the violent and disturbing imagery in books like American Psycho or Cujo, or that Madonna's SEX or Fifty Shades of Grey are the best way to introduce kids to the concept of human sexuality? No, I don't. But I don't think these books should be taken off bookstore and library shelves, tossed in the trash heap, and burned.

It's always a good time to discuss how to ensure young audiences are reading the material that's right for them — the stuff that's not inappropriate — but it's particularly relevant this week.

First, let's define what "inappropriate" actually means. This may seem reductive, but the definition of what constitutes "inappropriateness" lies at the heart of censorship issues. Teacher and author Dani Alexis points out that it doesn't work so well when we keep defining inappropriate as that which we find "squicky." (if that were the case, the word "moist" would have been banished from our lexicon ages ago).

However, decades of research into the development of the human brain shows that children process information differently than adults, and that generally, children under the age of 12 have difficulty understanding abstract and hypothetical concepts. For example, SEX isn't an inappropriate book for kids because it deals with sex, but because of the way it presents the topic — in an advanced, exploratory way that includes gender politics and societal norms. That's not to say that children can't learn about human sexuality through books — they just need to be written at a level commensurate with a child's stage of development, and there are plenty of books out there that are.

Banning books that fall under that definition of inappropriate isn't the answer to ensuring kids are only receiving age-appropriate reading material, but what is? In honor of Banned Books Week, here are some ideas:

Movies, television shows, and recorded music all have some sort of age-based content rating system to help audiences understand what kind of content is included in the work, and provide guidelines for determining if it's appropriate for children. Beyond basic categorizations of target age groups (children's, YA, adult) and genre (mystery/sci-fi, comedy, popular fiction), books don't offer much to go on when deciding if the content is appropriate for a reader. Establishing a more specific rating system, and including a list of any possible objectionable content in the description or on the book jacket might help subvert attempts at censorship. Like other forms of entertainment, it puts the onus on the audience to decide if the content is acceptable and proceed, or objectionable and move along.

2. Set up parameters to support the rating system

It doesn't much matter if books are given ratings and content descriptions if kids can still get their hands on those books willy-nilly. While most libraries and bookstores already have some general divisions based on age (mainly the children/YA section and the adult section), there's not really anything stopping the flow of traffic from one section to another. One solution is to set up access to the "adult" section like that of an R-rated movie — you need to be of a certain age or accompanied by an adult. In libraries, setting up the kind of materials a kid is allowed to access or check out could be part of the library-card process. It's one possible solution, at least until we can figure out how to make restricted books scream when opened.

3. Find an age-appropriate alternative on the same subject

As noted before, there are plenty of books written for adults that deal with very adult themes — sex, drugs, death, violence, etc. — in very adult ways. And as a parent, you're not going to be able to keep those books and their topics out of sight and out of mind of your children forever. What surprises me about when this happens, some individuals' first reaction is to get rid of the book, as if the child will forget about the sex, drugs, death, violence, etc. I'm not a parent, but based on my experience with children, I know this: They are extremely curious, and extremely relentless in their pursuit of answers to their questions. Why not use this as an opportunity to find an age-appropriate book that introduces the subject in a way that benefits the child? Trust me, they're out there.

4. How can technology help?

I make no attempt to hide my technophobia and love of print books in all their archaic, tree-killing glory. However, while working on this piece, it did occur to me that the transition to e-books and e-readers could possibly help cut down on censorship. As more people switch to e-readers, which presumably don't get left lying around unattended as much as print books might, there may be fewer opportunities for inappropriate books to end up in the wrong hands. And since you need to buy e-books with a credit card, which likely belongs to an adult, Junior can't sneak into a bookstore and buy a clandestine book with his paper route money (are paper routes even a thing anymore?). Of course, inviting more technology into our lives means exposing ourselves to a whole other level of inappropriateness to worry about.

While these suggestions may raise questions and concerns of their own, it's important to keep the conversation about censorship and how to avoid it while still serving the best interests of all parties involved going not just this week, but all year long.